This week, we continued our survey of the Pine Hill Village Site behind Goodhue and began excavating in two locations. This also included expanding our grid lines and mapping the site location using DGPS.

On Tuesday afternoon, we met in the arb office to discuss our survey and excavation plan for the day as well as the methods archaeologists employ when considering excavation sites. Alex started class with a brief tutorial on ArcGIS. He discussed georeferencing which is assigning a location to something like a .JPG photo that has no spatial reference. You can match recognizable features and warp the photo to visually align it onto a map baselayer. This is a coarse way of doing it. Georeferencing can also be done by noting the exact spatial coordinates and converting it to the datum used on your digital map.

We also talked about the idea that the absence of artifacts is still something remarkable. No data is still data! If we aren’t finding artifacts from Pine Hill Village there might be a reason for it.

We also learned about contexts. During an excavation, different areas are called contexts. Each area is a different type of soil. Separating into groups based on distance would be too arbitrary.  We look at a top view of the surface but also the profile view. Soil changes are categorized by soil changes. Different depositional events, for example a flood bringing sediments or a deep hole dug for a post can leave different signatures. Our goal is to group “like with like”.

After our discussion, we split into teams (see image below) to divide up the work. The teams surveying the additional squares encountered heavy vegetation and brush in the remaining survey units (10 m by 10 m) from last class (especially units located in rows 13 and 14). They then transitioned to the new survey units created in class–starting with S16. Of the 20 units covered, artifacts found included lots of plastic, lots of golf balls, a brick, asphalt chunks, concrete chunks, and a piece of glass. The surveys were conducted in the same manner as the previous week’s surveys–the teams walked side by side across the units. Obstacles for Tuesday’s survey included heavy rain and heavy brush, making it more difficult to catch things and be very thorough. 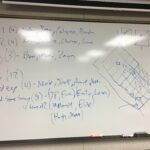 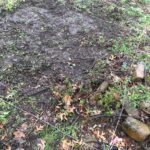 My group looked at the “rubble pile,” which the class identified as one of two sites of interest. 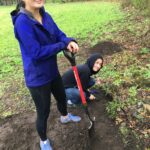 Two of my group-mates getting diggy with it. 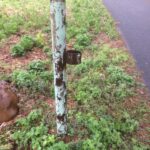 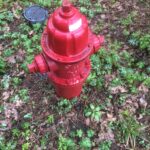 The maps show the new points in red and the old points in green. The grid is shown in white. The while polygons in the second picture show the location of the two excavation trenches. Trench one is the polygon in the north and trench two is south of trench one.

The mapping team identified three new features including the path, the fence post, and asphalt pile which could possible be remnants of an old road.

The excavation teams looked at two sites–the first trench was dug at the fire hydrant site and ran parallel the pipe. The second site was located to east of the rubble pile, parallel to the rubble pile, and included a small sliver of the rubble pile. (See zoomed-in image of the excavation sites. Both trenches were 2m by 2m. The teams started by removing obstacles such as tree branches and rocks, then took the top layer of the soil off, then began removing dirt with trowels. The fire hydrant group reached the step of taking dirt layers and putting it through the sifter to catch any artifacts. In this process, they found several pieces of glass. Obstacles to the excavation process included the heavy rain and deep tree roots in the trenches.