Placed to explore the rubble pile discovered during our initial grid survey, this trench primarily uncovered a variety of building materials, including concrete chunks, bricks, and wire. A 3D model of the completed trench is displayed on the photogrammetry page of this website. The location of this trench in the greater context of the full fieldwork completed at Pine Hill Village site is shown on the interactive map page. A broader understanding of the historical context of GI villages, and the creation of this specific site can be found on their respective pages.

The findings from all three contexts, by thematic content, are elaborated upon below.

Figure 1: A top view of the bottle cap found in Context 2 at a depth of approximately one and a half inches.

When first collected, this artifact was entirely covered in dirt and rust. During processing, however, we were able to discover a portion of the cap’s logo with vigorous cleaning. We can identify that the bottle cap contains a blue and white pattern and small lettering toward the bottom of the cap. However, we were unable to uncover enough that we can definitively determine the bottle cap’s brand, despite extensive searching about beer brands. 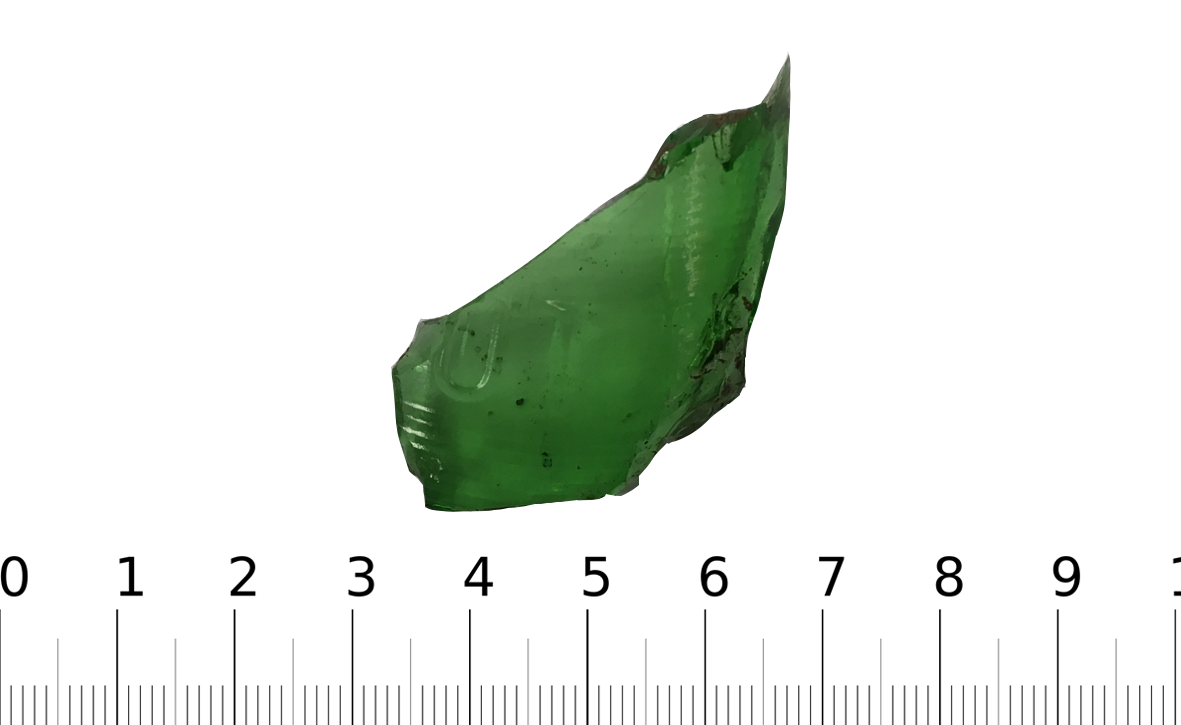 Figure 2: A side view of a green shard of glass with ribbing and the letters OTTO. This glass was found in context 2.

This glass fragment is an excellent example of our identification work; the shape of the piece makes it clear that it was originally on the side of a glass bottle as it began to taper toward the neck. The pattern and discernible lettering (“OTTO”) also make it possible to speculate about the bottle’s brand and chronology.

According to experts at Berghoff Beer, a shortage of brown glass during the World War II era left European breweries with clear glass to use for bottling. Higher-quality beer breweries accordingly opted to use green glass for bottling in order to distinguish their product from lower-quality beer, ultimately making green glass beer bottles a status symbol in postwar Europe. However, green glass beer bottles reveal nothing more than breweries’ aesthetic choices. Heineken, for instance, sells its mass-marketed beer in green glass bottles, and Heineken is undoubtedly not a status symbol.

The interpretive challenge for the green glass, then, lies in the distinction between high-quality European beer from the postwar era and low-quality mass-marketed beer from the past few decades. To that end, if we determine the brand identity of the green glass shard at hand, we can better understand its original function.

Further research would consider the shard’s thickness, curvature, embossed lettering, and engraved lines, all of which are attributes that have changed over time with the advent of newer manufacturing technology and aesthetic norms for green glass beer bottles. Resources like the Society for Historical Archaeology’s Bottle Dating guide elaborate on temporal aesthetic and manufacturing norms. Unfortunately, this particular guide ends at the year 1950, and even so, focuses far more on the late 19th century than on the 20th century.

This trench contained a great variety of building materials from which we can learn about the site overall, as well as about the construction of Pine Hill Village. We discovered chunks of concrete and asphalt, as well as various types of pottery pipes and nails.

These artifacts are very understandable given that the placement of trench two was based on the pile of building materials we discovered during initial survey. While they initially appeared virtually identical, our processing allowed us to distinguish between different types of poured building material; asphalt, concrete mixed with gravel, and lighter colored purer concrete. The asphalt matches the samples found in trench one and the road adjacent to the site. The various concrete pieces offer greater insight into the particular materials which were likely used for Pine Hill Village’s buildings directly.

In addition to these poured materials are the constructed items; bricks, nails, and pipes.

Figure 3: A side view of three nails found at a variety of depths in context 2.

We assume that these are modern machine-cut nails dating from after the the 1830s because the heads are uniformly convex on each side. However, because the shape of nails has not particularly evolved since the 1830s and because the nails are fairly rusted, it is difficult to determine a more exact time period for when these nails were manufactured. A guide to nail chronology produced by the National Parks Service suggests that decorative details — such as the ruts on the side of the nails and the pattern on the top of the nail — are necessary to distinguish modern machine-cut nails from modern wire nails. These details are obscured by the rust and wear of the building items.

Figure 4: A side view of a curved shard of pottery found in context 2 at a depth of about two inches.

This piece of pottery’s curved shape allows us to draw the conclusion that it was part of a larger pipe, despite the fact that we did not discover further contiguous sections.

Figure 5: A side view of a hollow form brick found in context 3. The pattern of ribbing on the brick distinguishes it from a regular brick.

This brick is an example of a hollow form brick, first created in the early 1900s and widely used when constructing buildings during the time period when Pine Hill Village was constructed, according to Gulf Cement Industries Factory. Hollow form bricks contain patterns in the middle of the brick instead of being a solid chunk of pottery.

Figure 6: A side view of three bricks found throughout context 3 at varied depths.

Figure 7: Nine chunks of road asphalt found at a variety of depths in context 2, distinguished by their dark color.

Figure 8: Ten chunks of building asphalt found at a variety of depths in context 2. The rocks protruding from the asphalt distinguish it from its road counterpart.

The chunks of asphalt above two different varieties of building material. We think that the asphalt on the top is an example of asphalt from the road that ran through Pine Hill Village. This is our hypothesis because of the asphalt’s dark color and the location it was found in the trench, near the area where we think a road used to run. The asphalt on the bottom is an example of building concrete, likely used for a building foundation. We hypothesize that this is the case because it contains more filler in the form of rocks and stones and because we found it deeper in the trench. We think that these areas would be too deep for the road to have run. 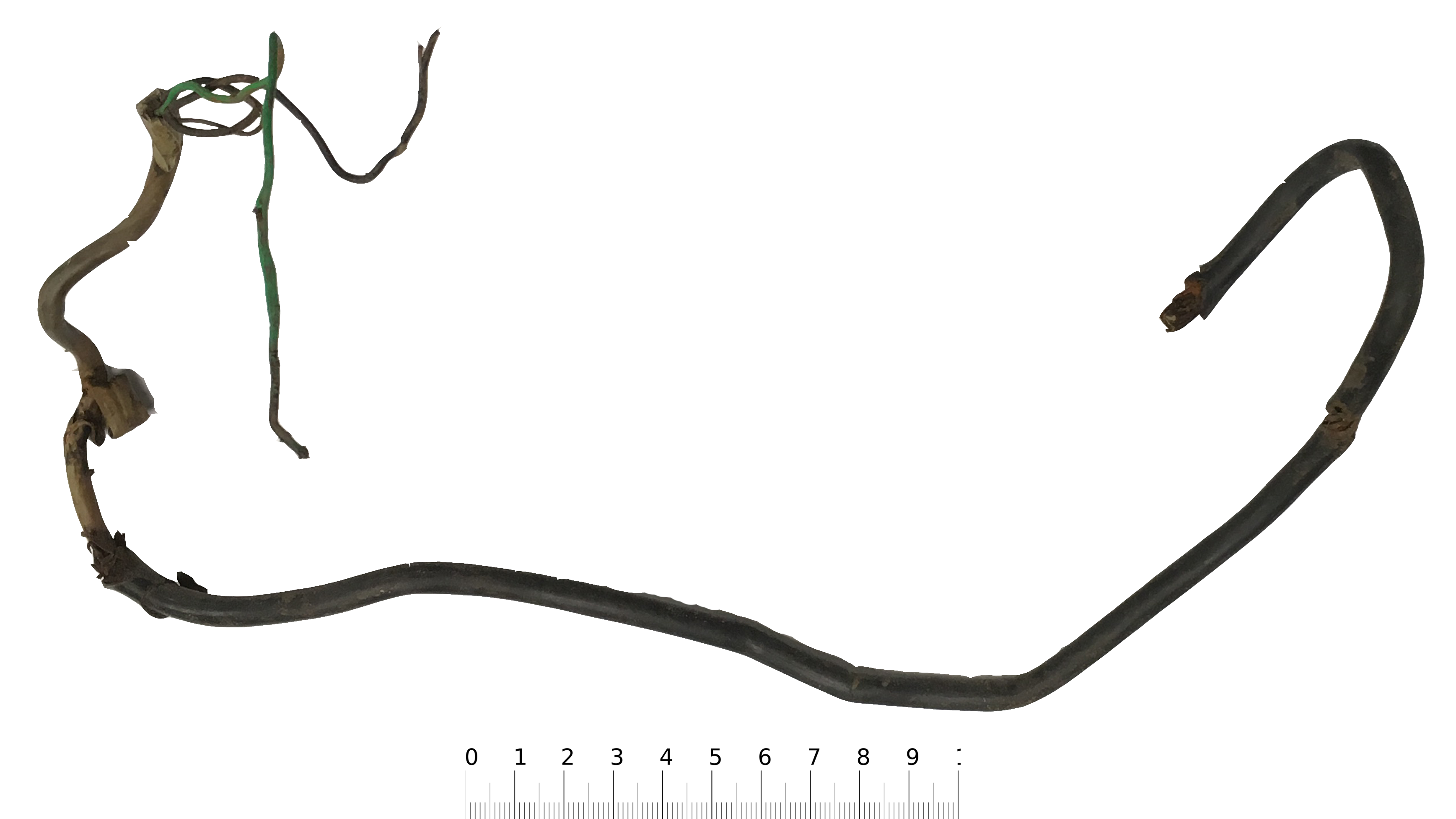 Figure 9: A side view of a long segment of plastic-coated wires found in context 3. These wires were found at a depth of approximately 3 inches.

We think that this set of wires coated with plastic might have once acted as a component of Pine Hill Village’s electricity system. This wire allows us to understand the amenities provided to veterans living in Pine Hill Village; namely, electricity.

Overall, this trench provided us with a multiplicity of information regarding the materials used in the infrastructure and buildings of Pine Hill Village. Specifically, we learned about brick and nail types that were likely utilized in the construction of the village and about wires and asphalt used to create the village’s infrastructure. This trench also yielded information regarding the everyday happenings occurring at the Pine Hill Village site, whether propagated by veterans who lived there or by later Carleton students. We learned about these habits by examining the bottle cap and the green glass shard. Accordingly, this trench was useful for learning more about the construction and the cultural trends of Pine Hill Village.

2015 What Does the Color of Your Beer Bottle Mean? Berghoff Beer Blog. http://berghoffbeer.com/blog/what-does-the-color-of-your-beer-bottle-mean/.