Trench 2, situated on the East side of the cabin, was dug there because during the survey phase, it was identified as an area of high density for surface artifacts. These findings included glass, some metal, and plastic trash. The 1.5 x 1.5 meter trench was also adjacent to both a woodpile that could have been from the time of the cabin and some cement pavers that were uncovered during survey. We know from human sources that there was a door with stairs leading to it on the “back” of the cabin, which matches the location of the buried pavers, so the decision was made to dig a trench next to the cluster of pavers. To the surprise of the original trench excavators, once a tree and the subsequent topsoil were removed from the trench site, it was found that there was a strip of pavers that ran through the trench, dividing it into two distinct sections (see figure 1).

Because the trench was divided into two sections by the pavers, distinct contexts were developed for each side in order to show which side any found artifacts were from. This helped with cataloging our finds, and was set up in this way so we could determine if there was any differences in finds from one side of the pavers to the other. For reference, the odd-numbered contexts are from the eastern side of the trench and the even-numbered contexts are from the western side of the trench. The surface of the trench, defined as anything that doesn’t require digging to get to, was an indicator of the types of artifacts that would be buried below. There were 34 pieces of glass, 10 pieces of metal, and 5 pieces of plastic found on the surface. The soil of context 1 and context 2 was similar to the soil that covered the surface of the trench. It was dark, moist, and relatively uniform. Context one was not as rich in artifacts as the surface had been, but there glass, metal, charcoal and plastic were all found. Context 2 had two distinct deposits of glass, which accounted for almost all of the artifacts found in the context. Moving back to the east side of the trench, the soil shifted to a lighter brown color, and became sandier in composition. In this context, there was more charcoal than before, and a piece of ceramic was found on the northern side. The categories of glass, metal, and plastic were also found in this context. Context 4 and 5 marked the biggest soil change, as the composition moved to almost completely clay and silt. There were very few artifacts found on either side of the pavers once the clay layer was uncovered.

Figure 2. Looking north at Trench 2 while in context 2 (left) and context 3 (right).

Throughout the process of digging, there are multiple techniques used to remove the earth and uncover the artifacts. Troweling was the first method used because it allowed the excavator a lot of freedom to move at their own pace and to carefully look through the loose dirt in search of artifacts. As moved down into the lower contexts, it became necessary to begin shovel shaving. This process required a flat head shovel being pushed along the exposed layer of the trench, and depositing the resulting loose earth into a bucket for sifting, which quickly became the most efficient way to discover artifacts. Sifting was a two-person job, where one person dumps a bucket of dirt onto the thinly meshed wires that allows the smaller dirt particles to fall through and catches the larger artifacts. Trench 2 was unique because of the stable pavers that cut across the entire trench, which provided a platform from which to excavate, but in general, kneeling was the best strategy to be able to reach down into the trench without affecting the delicate edges, which could crumble with just a slight touch.

Recording the process and results are huge parts of archaeology because of its destructive nature – excavations can only happen once – and we diligently took turns filling out excavation logs that summarized a context per form (see figure). These forms make you not only take the time to record what is being discovered, but also reflect on what this means and the significance of any action you take. 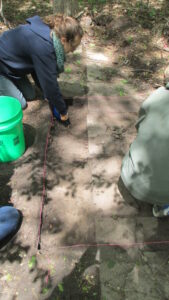 An example of scooping up the loose dirt to be sifted 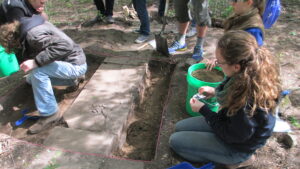 Trench 2 team at work, shovel shaving about to commence 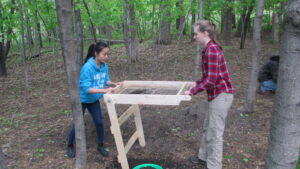 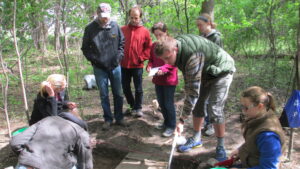 Below is a detailed list of the items found at the Women’s League Cabin site, sorted by material and trench context. The column farthest to the right provides extra information regarding especially noteworthy objects.

A slideshow of the artifacts. Photos courtesy of Carrie Johnson. 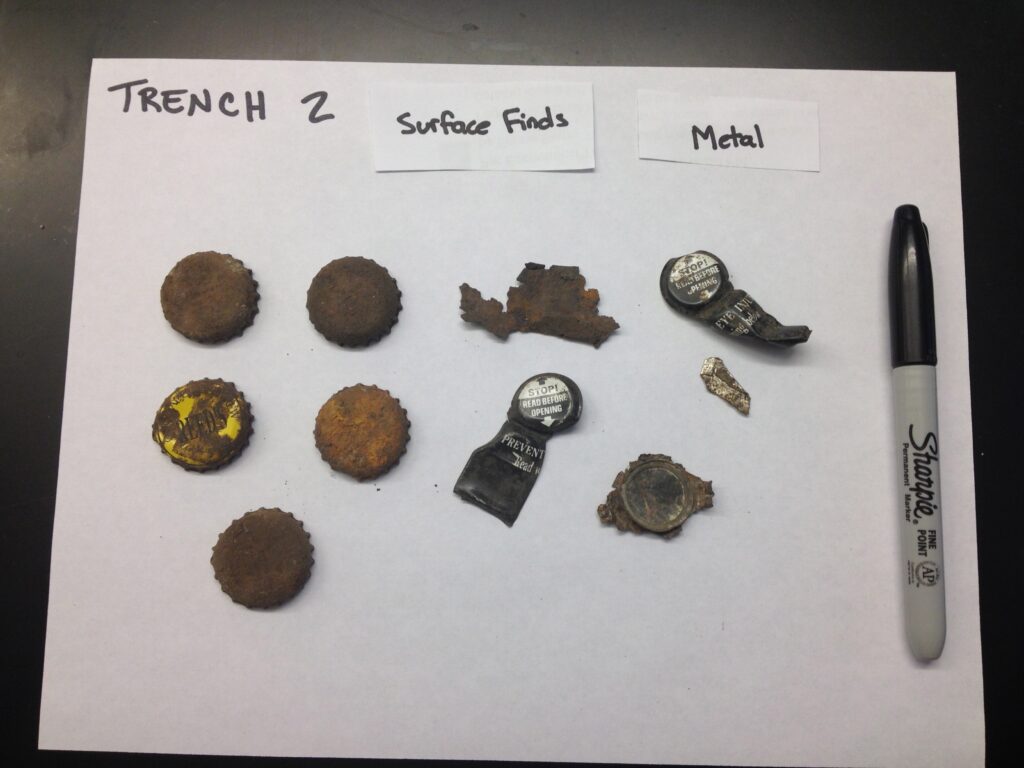 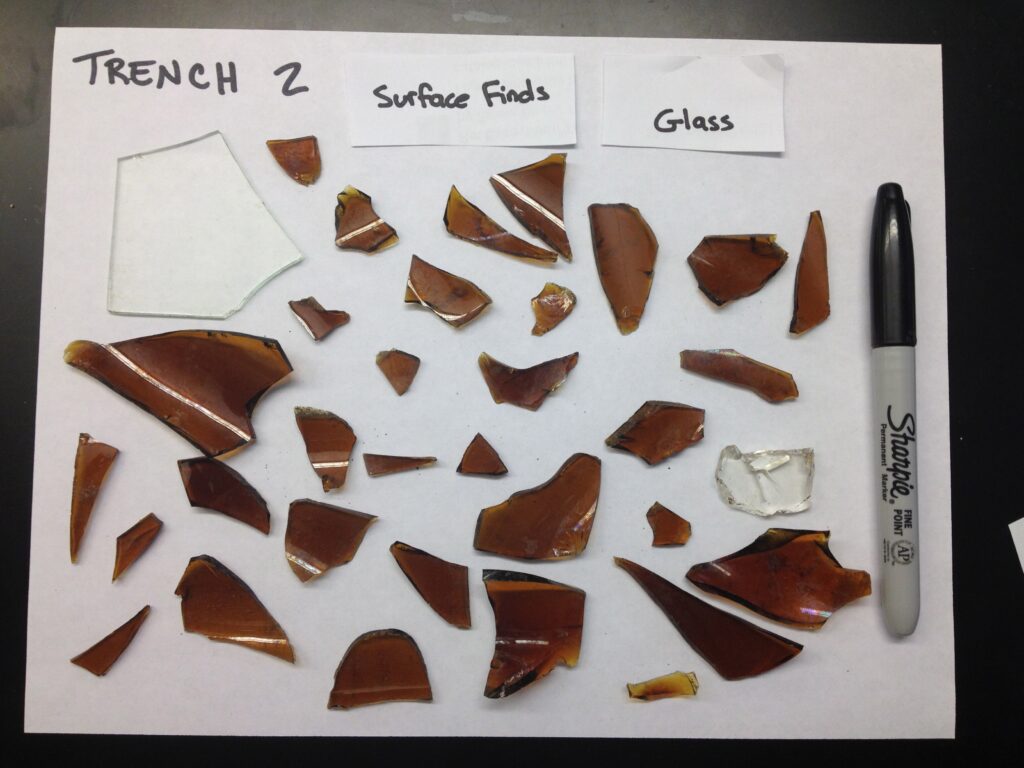 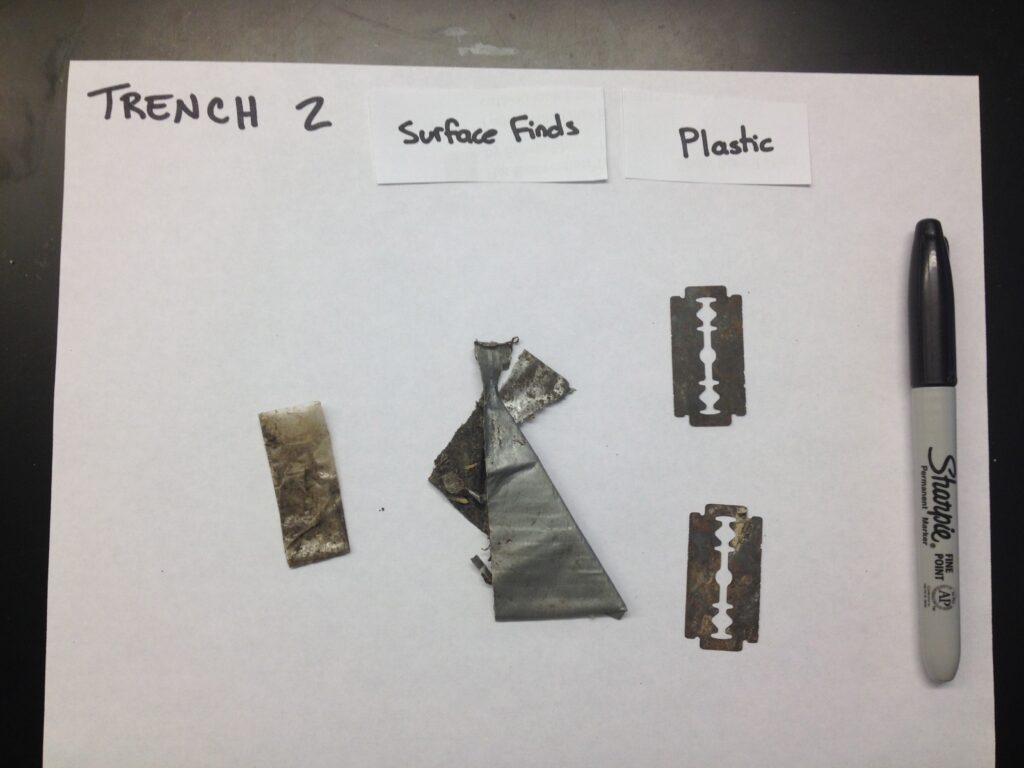 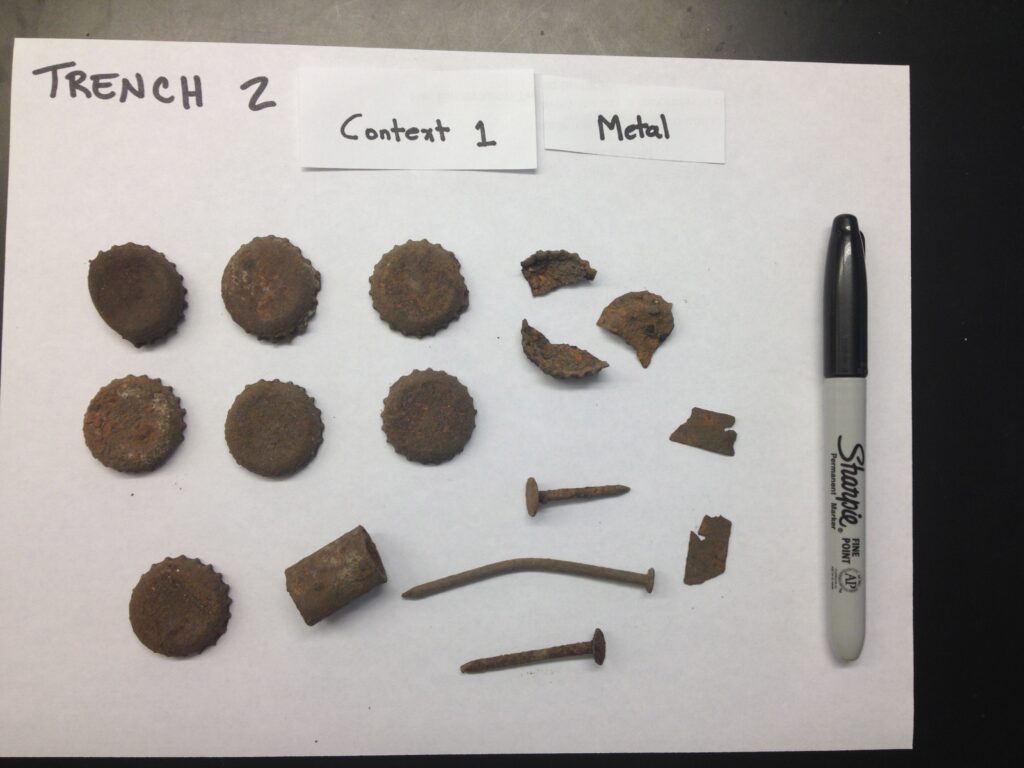 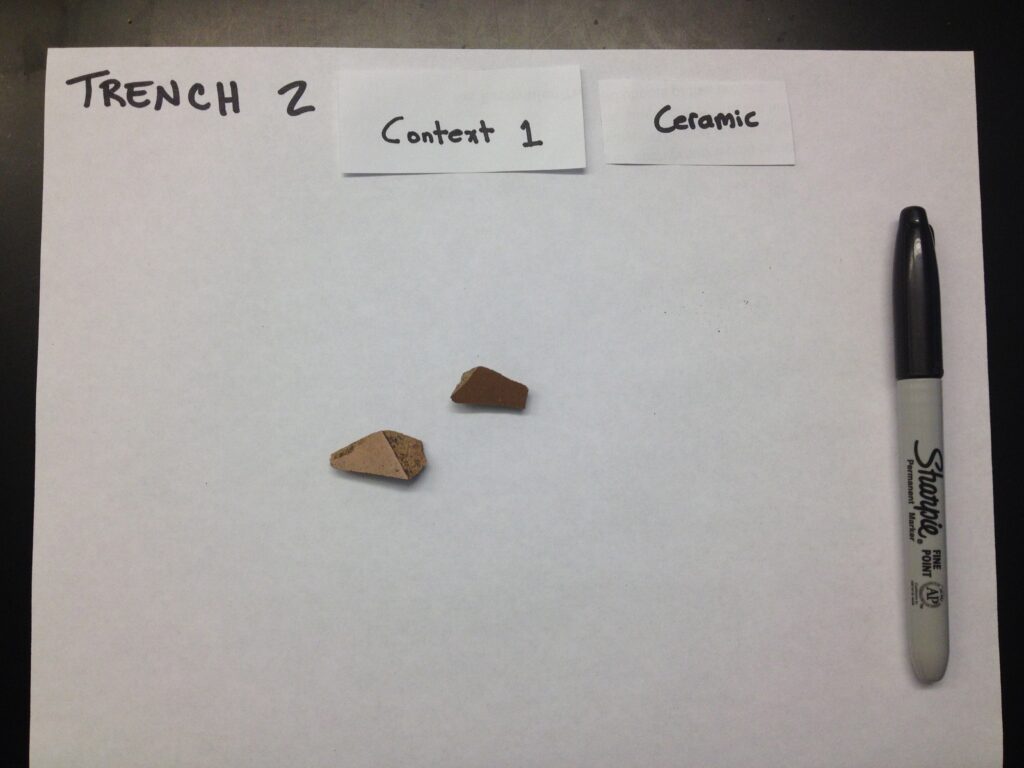 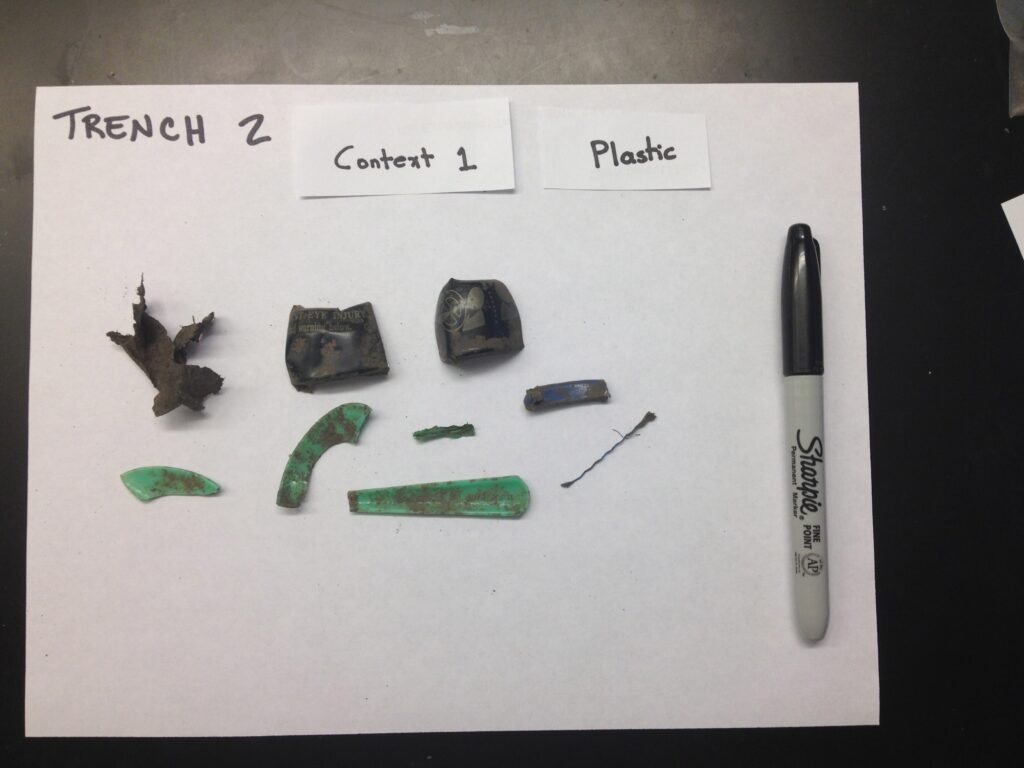 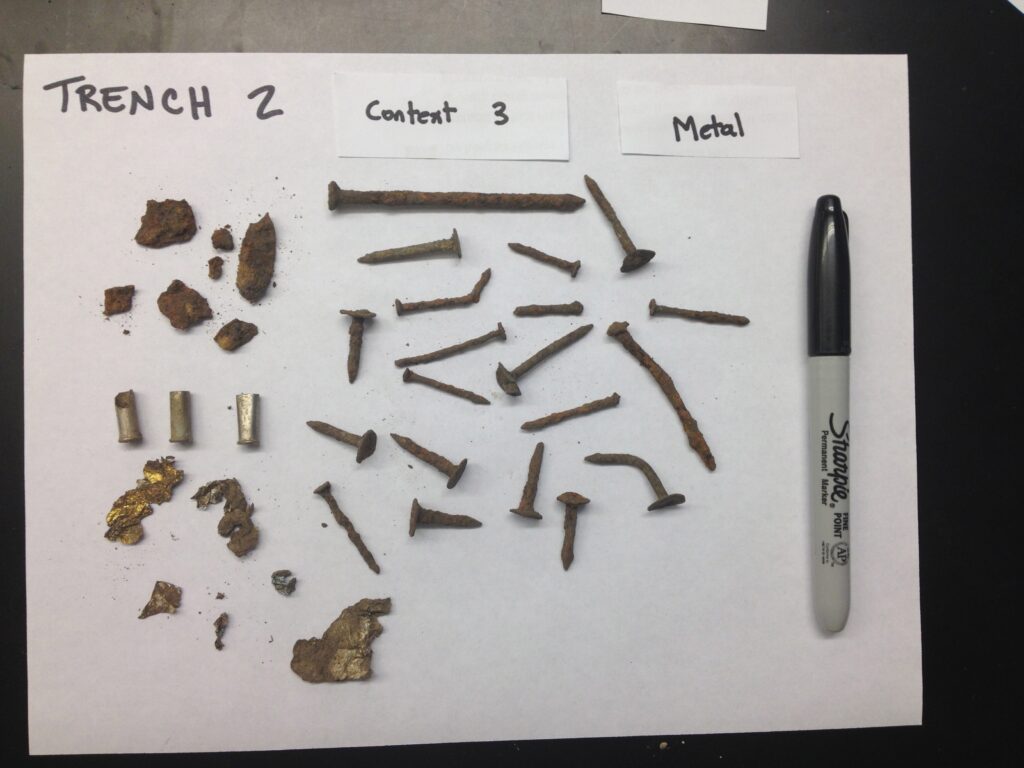 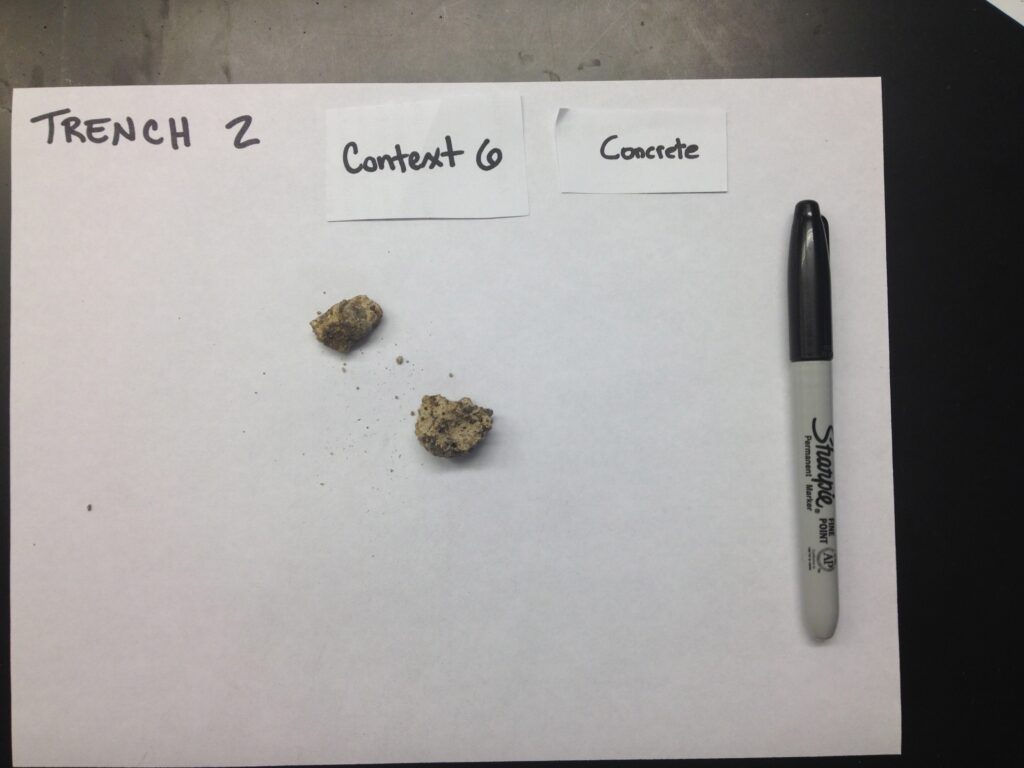 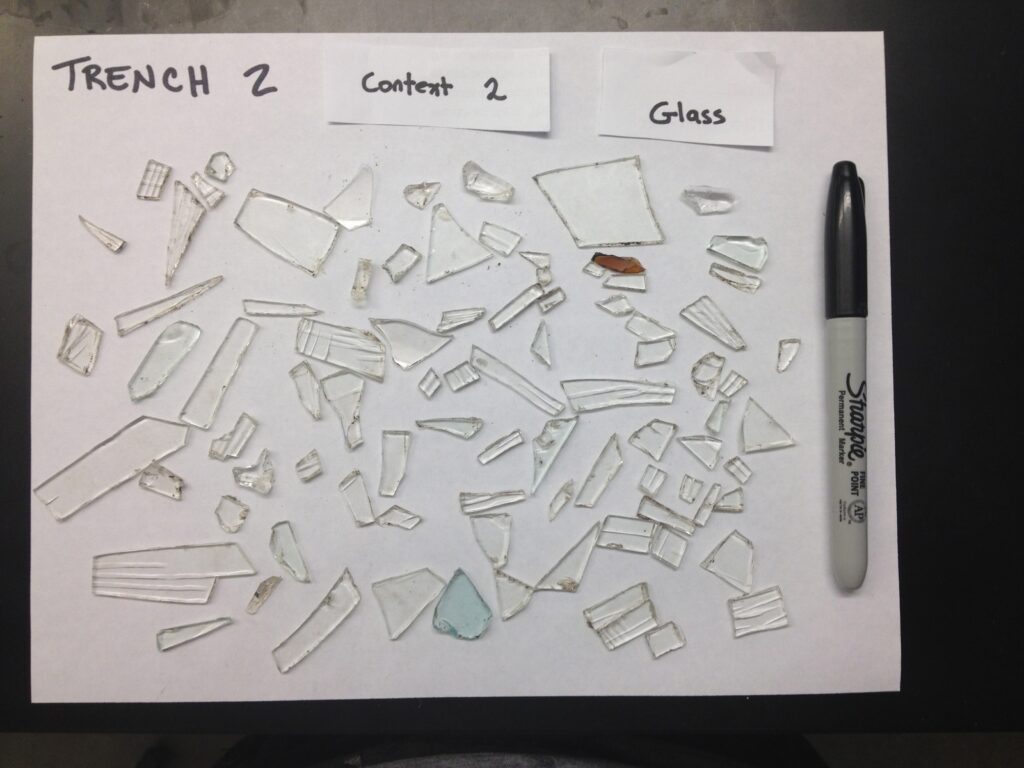 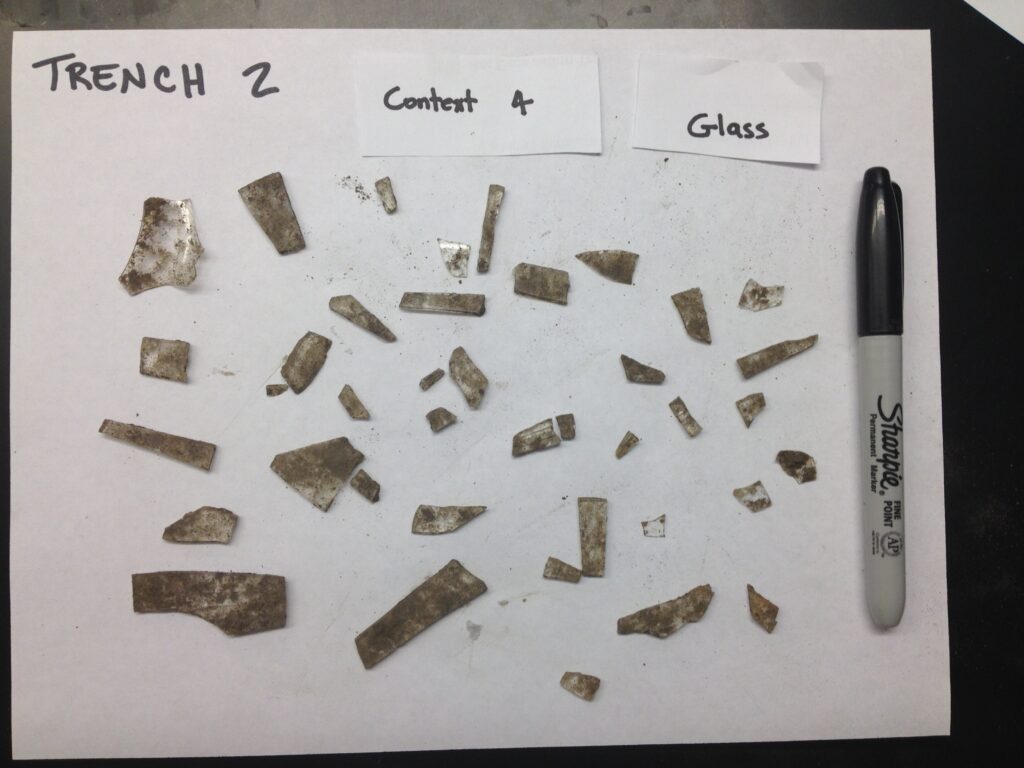 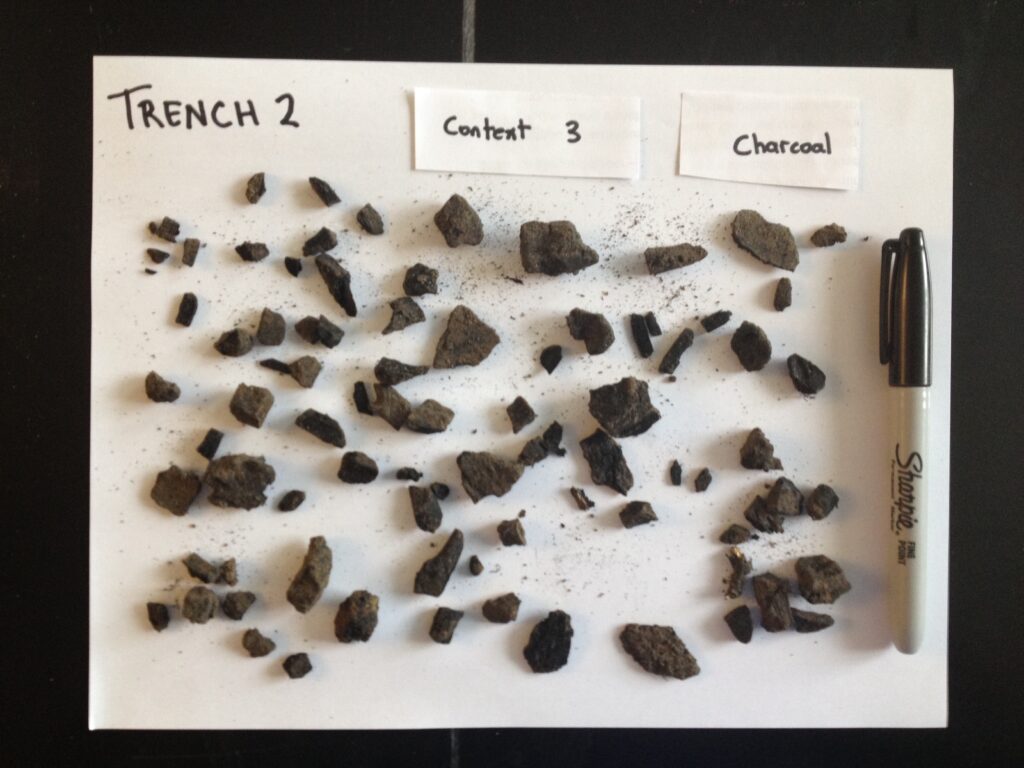 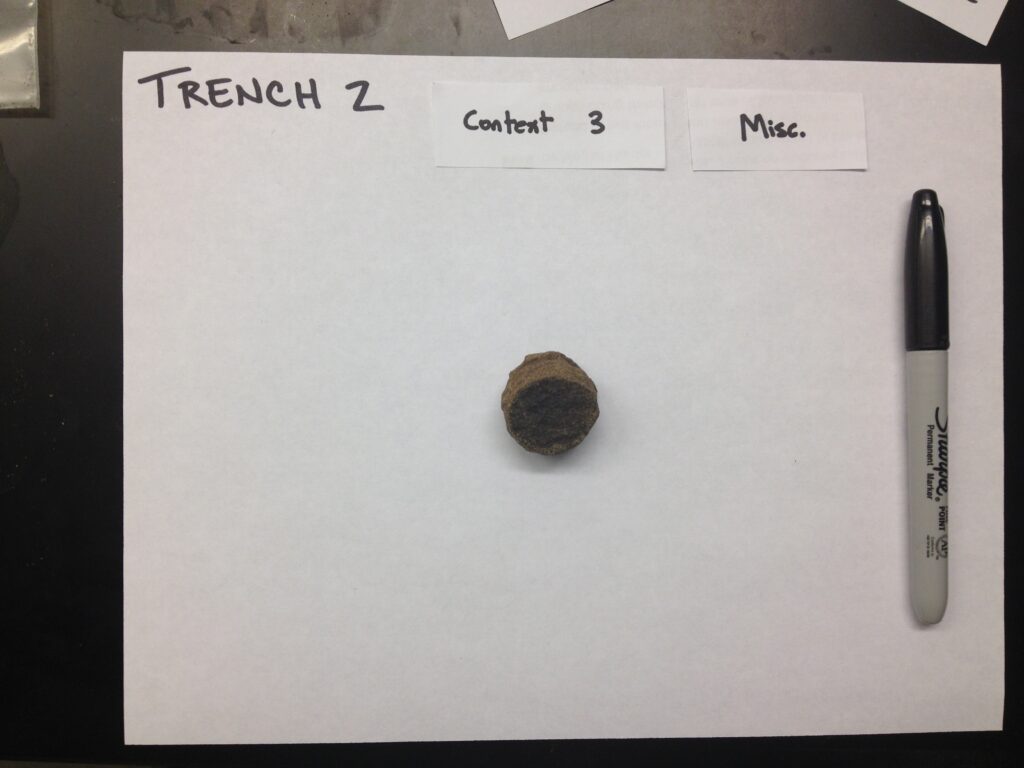 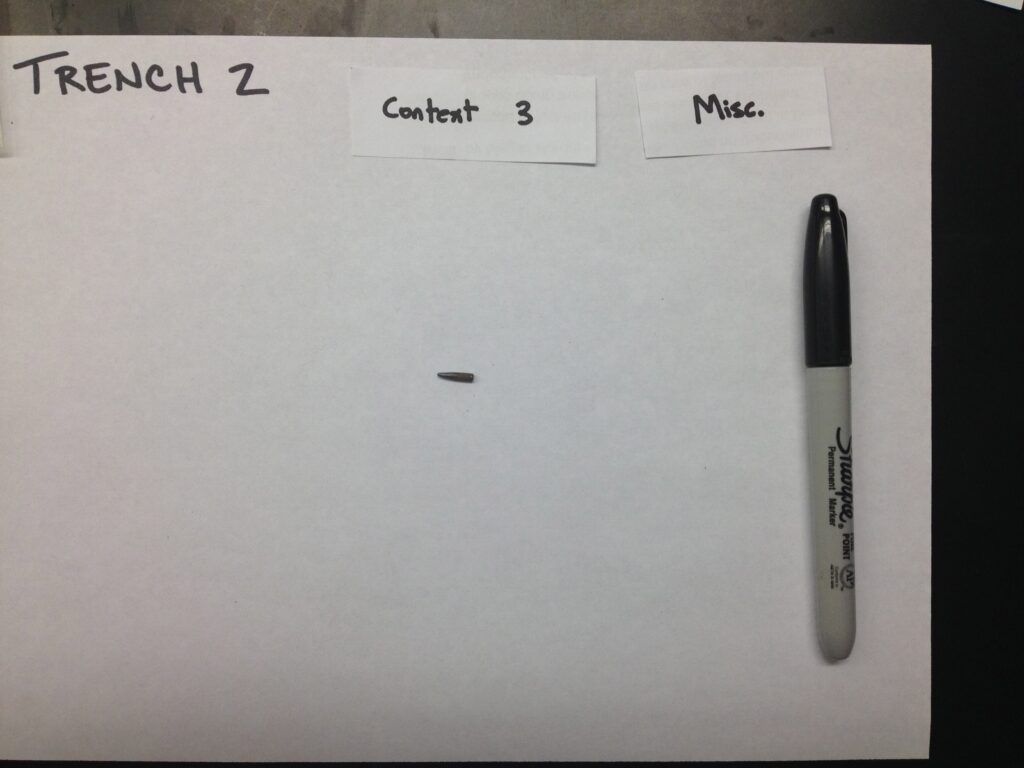 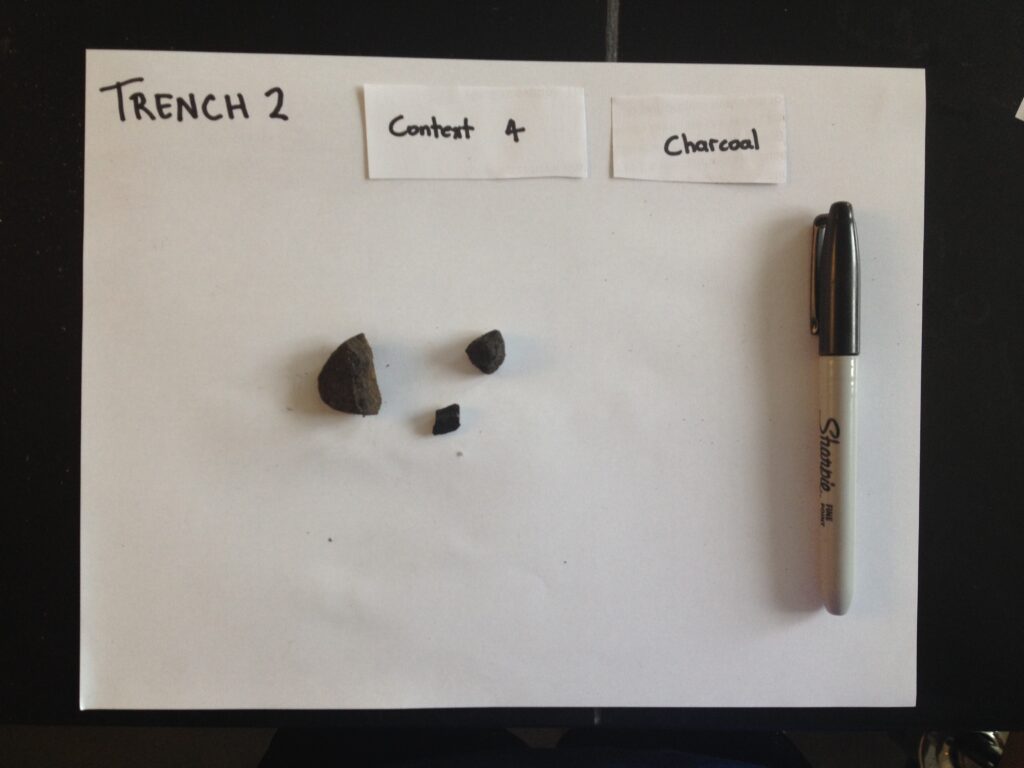 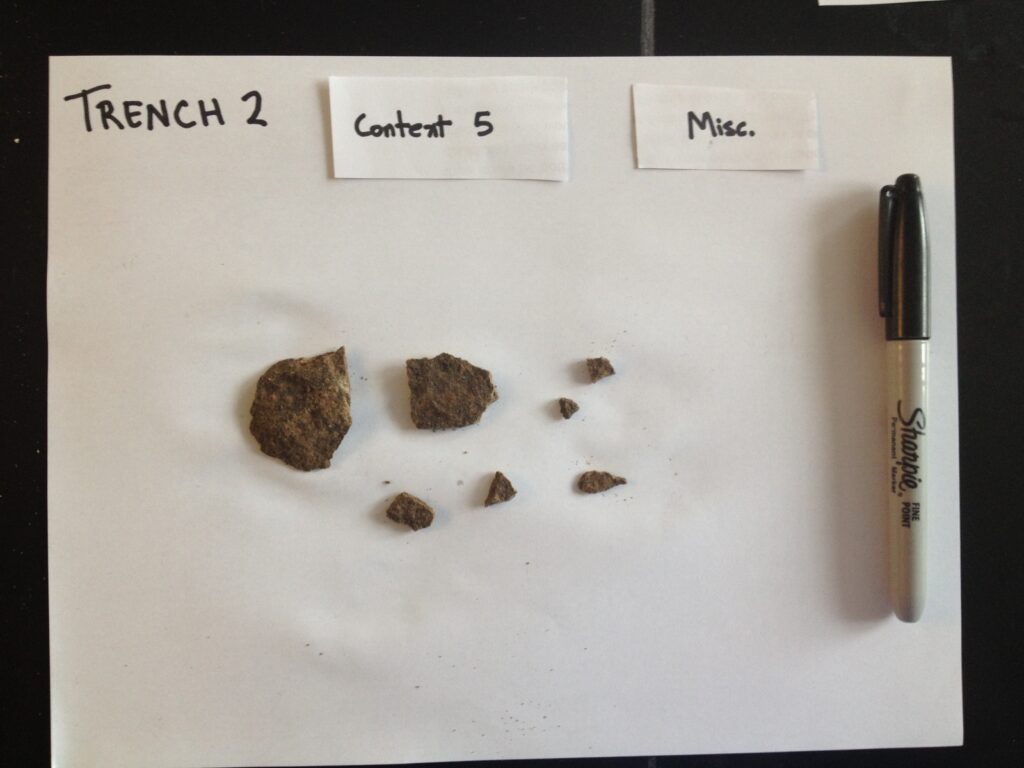 This table provides information on the quantity of object found at the site, and is sorted by material and context. The final row lists the total number of items found for each material category.

Reed’s is a soft drink company that was started by Chris Reed in 1989. The brand is known for its ginger ales and non-alcoholic beers, including the Original Ginger Brew (Reed’s Inc. 2015). The bottle cap from this drink was found at the Women’s League Cabin site and is shown in Figure 1, rusty but still legible. A modern version can be seen in Figure 2.

This beverage was the company’s first creation, derived from a homemade Jamaican recipe for ginger ale, and Reed’s Ginger Brews were the “first commercially brewed sodas in the world” (Reed’s Inc. 2015). The drinks are produced at two manufacturing plants. The plant in Pennsylvania deals with Ginger Brew products, and the second plant in Los Angeles manufactures private label products and Kombucha (Erymanthos 2014).

Reed’s mainly serves the United States’ population, and its products are stocked in over 15,000 locations, including natural food stores, supermarket chains, and retail stores. Well-known stores include Kroger, Costco, Whole Foods Market, and Trader Joe’s (Erymanthos 2014). Within a 20-mile radius of Northfield there are several locations which stock this brand—Just Food Co-op, Econofoods, Cub Foods, and Trailside Liquor—and the bottle cap found at the cabin site could have come from any one of these stores (Reed’s Inc. 2015). Because the first Reed’s product was produced in 1989, it is probable that the drink was brought out to the cabin site when it was being used as a party spot. Today, Reed’s is still in business and producing the Original Ginger Brew (Figure 3) as well as a variety of other ginger-flavored beverages.

Winchester ammunition was first produced in New Haven, Connecticut, beginning in 1866. The company was purchased by the owner of Western Cartridge Company, Franklin Olin, in 1931, and the Western plant in East Alton, Illinois continues producing Winchester ammunition today (Standler 2006). The Super-X line was introduced in 1931, and the head stamp can be seen in Figures 1 and 2 (Huegel 2014).

(Figure 1: The Super-X headstamp on a casings recovered from Context 2. Photo courtesy of Carrie Johnson.)

This ammo is commonly produced using brass cases, but looking at the case recovered from the Women’s League Cabin it is clear that the material is not brass. Instead, the case is either made of nickel or brass which has been nickel-washed. This helps with dating, because nickel cases were only common in two main time periods—the early 1930s and 1946-1956 (Huegel 2014). It is possible that the case is from the 1930s, because ammo can last for long periods of time without deteriorating. However, because the Women’s League Cabin wasn’t constructed until 1939, it is more likely that the ammo dates from the 1946 to 1956 period. During this time, nickel was used in ammo due to the high demand for brass for the war effort during World War II (RimfireCentral 2013).

The size and length of the case identify this as either a .22 long or a .22 long rifle (Figure 3). Since the cartridge has been fired and the bullet is gone, there is no way to differentiate between the two. As well, this is a rimfire cartridge, as can be seen from the placement of the firing pin on the rim of the base (Figure 4).

(Figure 3: A casing from Context 3 viewed from the side. Photo courtesy of Carrie Johnson.)

(Figure 4: The firing pin is circled in red, showing that this is a rimfire cartridge. Photo courtesy of Carrie Johnson.)

.22s are popular because they can be used in a large variety of rifles, as well as pistols. These were probably used at the Women’s League for plinking cans or shooting at small pests, sport rather than self-defense (Hawks 2005). Super-X ammo is sold at sporting goods stores, shooting ranges, and retail stores, and the ammo could have been purchased at one of these places or taken from a parent or a friend.

The aqua color in this shard is a result of iron impurities found in the sand used to make glass. This was a common color in American-made bottles prior to the 1920s, and after this time clear glass became much more prevalent. However, soda bottles and fruit jars are the exception to this trend, which can help with dating (Lindsey 2014).

The shard, owing to its color and the thinness of the glass, was probably part of a fruit jar, specifically a Ball jar (Figures 1 and 2). The Ball Glass Manufacturing Company was created in 1880 and began producing Ball jars in 1884 (Market Street Media 2015). The primary factory was in Muncie, Indiana, with other facilities in Oklahoma, West Virginia, Illinois, and Texas (Glass Bottle Makers 2014). These canning jars were made in a variety of colors, ranging from clear, aquamarine, green, amber and the distinctive “Ball blue” color. This latter color was manufactured from 1909 to around 1937 (Lindsey 2015). Because the color is so distinctive and Ball jars so prolific, it is possible this shard dates from that time period. However, dating when this shard was left at the Women’s League Cabin is difficult due to deposition lag. Because canning jars are made for long term use, the time period in which this shard was discarded may be very different than the year in which it was manufactured (Lindsey 2015).

Ball jars are sold in grocery stores, retail chains, hardware stores, and yard sales, and it is possible that the item came from one of these locations. If the shard dates to the time in which the cabin was still occupied, the lack of running water makes it unlikely that the jar would have been used for it original purpose of canning. However, it could have been used as a drinking vessel, held food from home, or been used for storage. If the shard dates to when the cabin was used as a party site, it is most likely that it would have held some kind of beverage. Ball jars have been out of production since 1996, but the company still manufactures other items (Glass Bottle Marks 2014).

We decided to situate Trench 2 here after examining blueprints for the cabin. We suspected that the location might have encompassed the backdoor leading in to the cabin, which first-hand accounts recall as being a well-traveled entrance. However, we did not discover any finds that would conclusively prove this. Excavating Trench 2 has revealed a great deal about the changing purpose of the Women’s League Cabin, and by extension the people using the site. Earlier layers of excavation uncovered a wealth of amber glass shards from beer bottles, a testament to the site’s purpose as a party space in the 90s. In deeper context layers there were other objects, such as bullet casings, which point to a more recreational purpose for the cabin’s inhabitants. In relation to the other trenches, the items that we found were probably first-time depositions, objects that were dropped by individuals and not purposefully moved until we uncovered them. There also was not as clear of a distinction between history levels for this trench, whereas other tenches had more distinctive layers. Altogether, excavating this site has been a rewarding experience, and an interesting look at the history of the Women’s League Cabin and Carleton in general.

Citations and Sources for more Information