In order to learn more about the actual experience of those who once lived at Pine Hill Village, a group of us wanted to reach out to Carleton alum who either may have lived there or may have known about the Village’s existence. 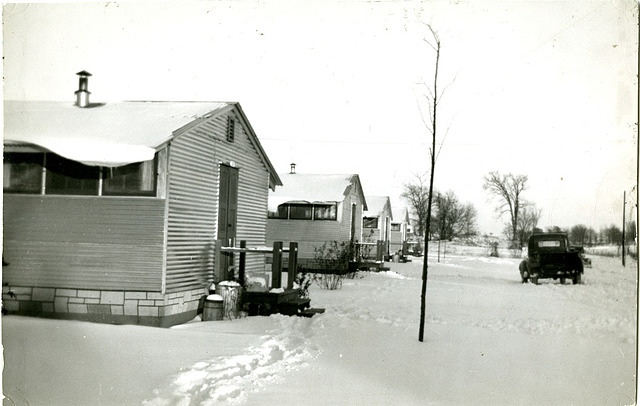 Using information from the Carleton Archives alongside personal histories, we produced a series of thematic sections to color the reader’s interpretation of Pine Hill Village. We also want to use these interviews as a chance to preserve the voices of those who lived at Pine Hill Village, as many of the residents are getting
older. This means this is the major chance to preserve this aspect of Carleton history. Finally, these interviews also serve as a means to remember Pine Hill Village, an important project because many of our subjects expressed sadness that the Village remains relatively unremembered on campus. Beyond this introductory page laying out our methods, we have our interviews and analysis which serve to capture the ethos of Pine Hill Village.

Our initial goal for perspectives on Pine Hill Village was to get a spread of residents of Pine Hill Village, alumni who did not live at Pine Hill Village, and, if possible, children of residents. We focused our efforts on three levels. First, we utilized the alumni listserv and Facebook account in order to spread our contact information and a survey hosted on Google Forms. Taking a mid level approach, we used the directory to create a list of alumni who we knew were on campus at the time Pine Hill Village was around and chose a sample of around 25 to reach out to over email. Finally, we used the documentary record to produce a list of people who we had solid evidence to believe lived at Pine Hill Village that we reached out to over the phone. Below is a table showing the total number contacted using each method, as well as the number of interviews or comments yielded from that method. The major takeaway from this process is that, direct phone calls were the most successful method of reaching out to participants, while the Google form distributed through email and Facebook was the least successful. This makes sense as the majority of interview subjects were in their 80s and 90s and less likely to be on Facebook or consistently use email.

A goal in the interview process was to engage with each participant with his or her specific knowledge and experience. For that reason, we did not approach interviews from a specific script but rather with a series of general areas we wanted to learn more about. Many of our greatest insights came from organic moments in the conversation or story telling. Particular themes we tried to touch on in each interview was the material conditions of Pine Hill Village, the communal life of the village, the relationship between Pine Hill Village and the rest of Carleton, gender and family dynamics, the transition from life in the military to Carleton, family life on a college campus, and their memory of campus and the village. Interviews ranged from a few questions exchanged over email to more in depth phone calls ranging between 25 and 45 minutes. The interviews were then transcribed by a member of our team. Once we had access to the transcript, all four of us read each transcript separately, highlighting elements we wanted to include in our final page. If at least three separate member’s highlighted the same section, we included them on the website.

Interviews in their entirety are on the website through audio files, selections from each are posted in the main section of the page. In making the selections of which portions of the interview to highlight we consider several facets of the section. First, we looked for any passages that would put any archeological findings in context. For instance, passages that confirmed a inference of the location of a certain feature were included. The other reason we may have pulled a section was that it told us something that the material record could not. For example, a discussion of the relationship between Village and dorm residents or a comparison between Carleton and the Navy are included because they could not be easily inferred from our archeological data. We also included selections about the collective memory of the place, hopefully providing reasoning for the efforts of the publicity team. Finally, selections were included that functioned as stories, allowing the reader to think about the narratives embodied in the site and give a human face not captured by other documentary or material sources.