Field survey is an important part of an archaeological project and often marks the beginning of the fieldwork portion of the project. The point of a field survey is to define the site size, layout, and type, and to give the researchers an idea of what artifacts the site will yield. Objects found on the surface help archaeologists paint a picture of the site and can help them decide which places may be useful to excavate. There are many different types of survey, each with their own techniques. Fieldwalking, for instance, includes walking in straight lines, scanning the surface of the ground, and picking up any visible objects for analysis and reference. Other survey types includes the use of technology like GIS mapping, subsurface detection, aerial reconnaissance, and ground-penetrating radar.

As a class, our fieldwork began with a practice systematic fieldwalking survey of an empty cornfield just behind the Hill of Three Oaks on the east edge of campus. The point of the exercise was to familiarize ourselves with the methods of systematic survey that not only included the fieldwalking itself, but also the methods of measurement, positioning, and mapping that come with creating a survey grid. The cornfield offered an ideal place to practice because it was a vaguely rectangular space that could easily be split into survey units, rows of corn guided the walkers in straight lines, and the empty and open environment allowed for easy communication between the walkers.

We performed this survey on April 11, 2017. We began by splitting the class into three groups, each with a facilitator who accounted for any found objects. After standardizing our measurements by pacing out 10 meters each, we all took our places ten meters apart at the edge of the field and began to walk north in straight, parallel lines all the way to the other end of the field. Every time someone found something worthy of note they picked it up, and after each 50 meters of walking we stopped and the facilitator recorded our finds on a survey unit form. The walker who found the object then bagged and labelled it for later inspection. 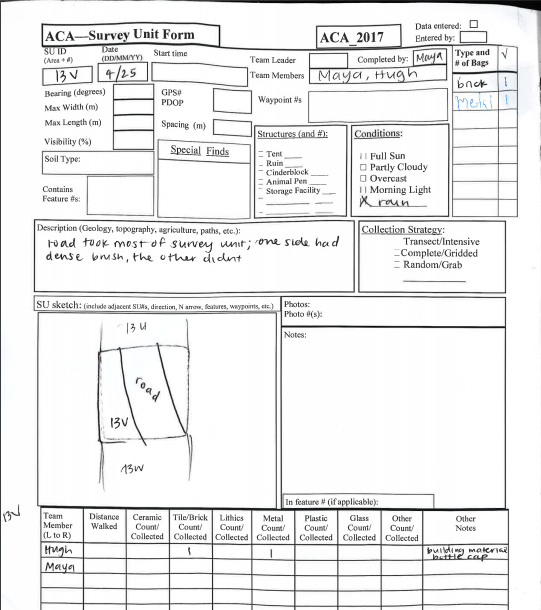 Example of a Survey Unit Form

The image below depicts our field-walking grid and strategy. In teams of 5, we fieldwalked north across the grid, keeping a close on eye on our team members so as not to move too far ahead of each other. Archaeologists conducting field surveys employ similar approaches to our class’s technique. This exercise proved extremely helpful to our archaeological survey of the Pine Hill Village site: https://archaeologyinthearb.com/archaeology-pine-hill-village/2017-fieldwork/field-survey-results/grid-survey-overview/

Grid map of the field-walking survey 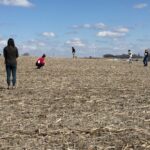 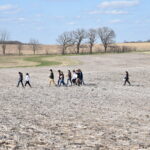 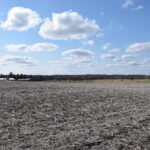 Field in which the students practiced fieldwalking 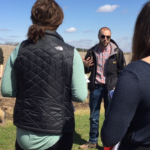 Professor Alex Knodell explaining how to perform a fieldwalking survey 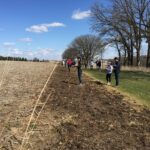 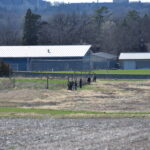 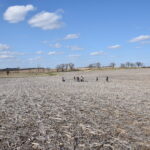 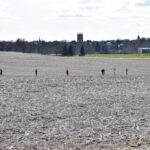 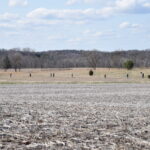 Most of what we found in the cornfield can be categorized as modern trash. We found 63 items total that fit into 14 different categories by material, including metal, glass, ceramics, rubber, plastic, and bone. Though most of it was trash, there were a few noteworthy things among the objects that we found. This included a Crown Cola bottle, about 40 bones belonging to an animal skeleton, a single shoe, and even a shell. 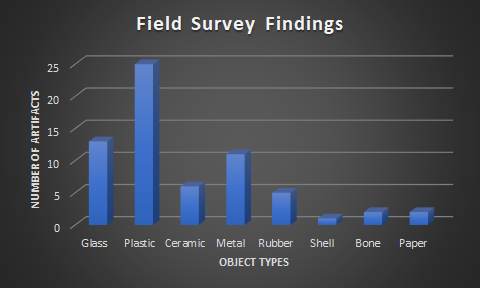 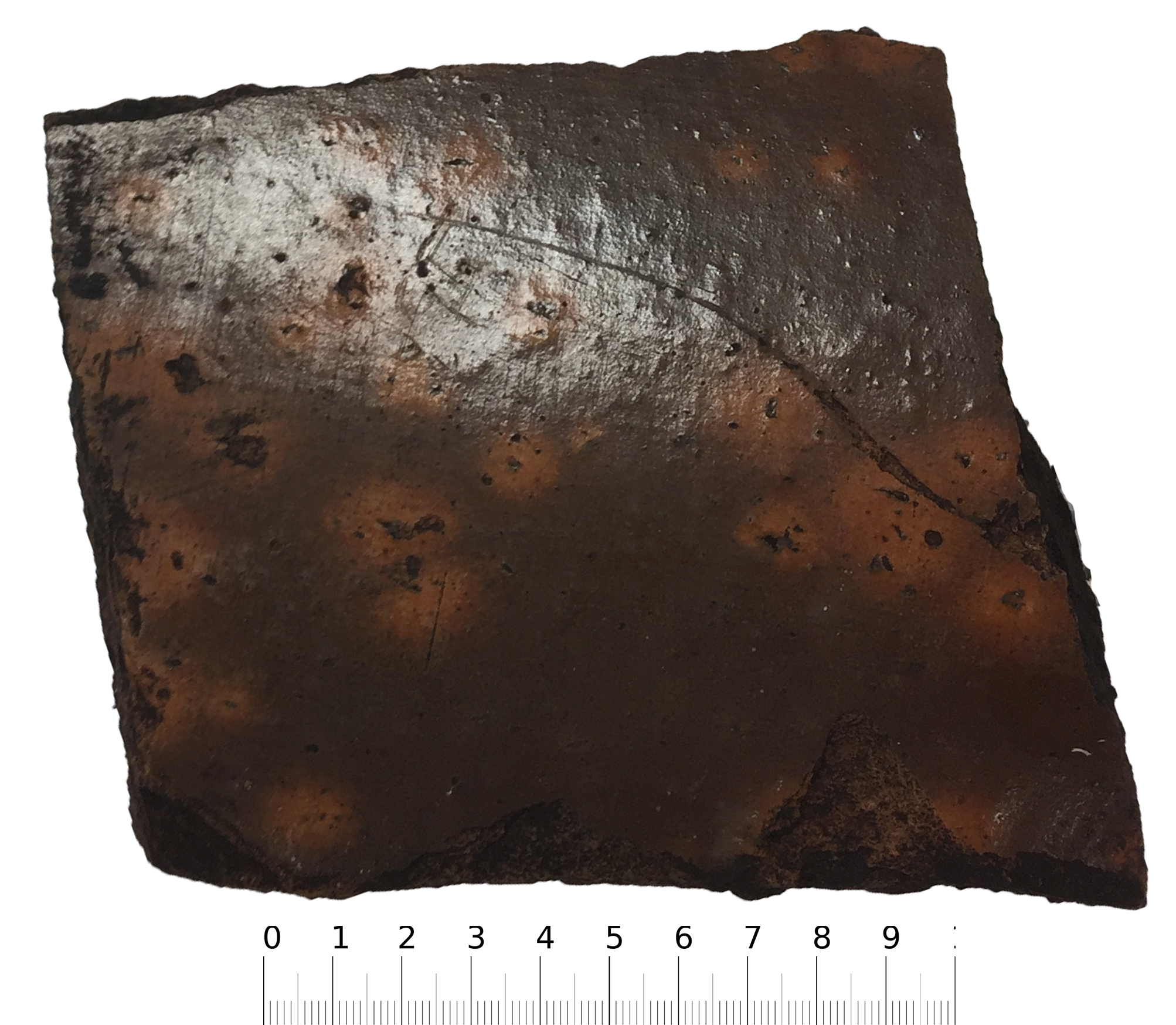 Ceramic piece from A3, lot 3

This ceramic piece was found in survey unit A3, lot 3. Possibly the outer section of a vitrified clay pipe, it is coated on both sides to prevent water damage. We found a report from the Northfield City Council Meeting and Work Session in 2012 that stated that the city of Northfield typically uses vitrified clay pipes for city sanitation, reaffirming our assertion that this artifact is part of a vitrified clay pipe: http://www.ci.northfield.mn.us/ArchiveCenter/ViewFile/Item/179. For more information see page 101. 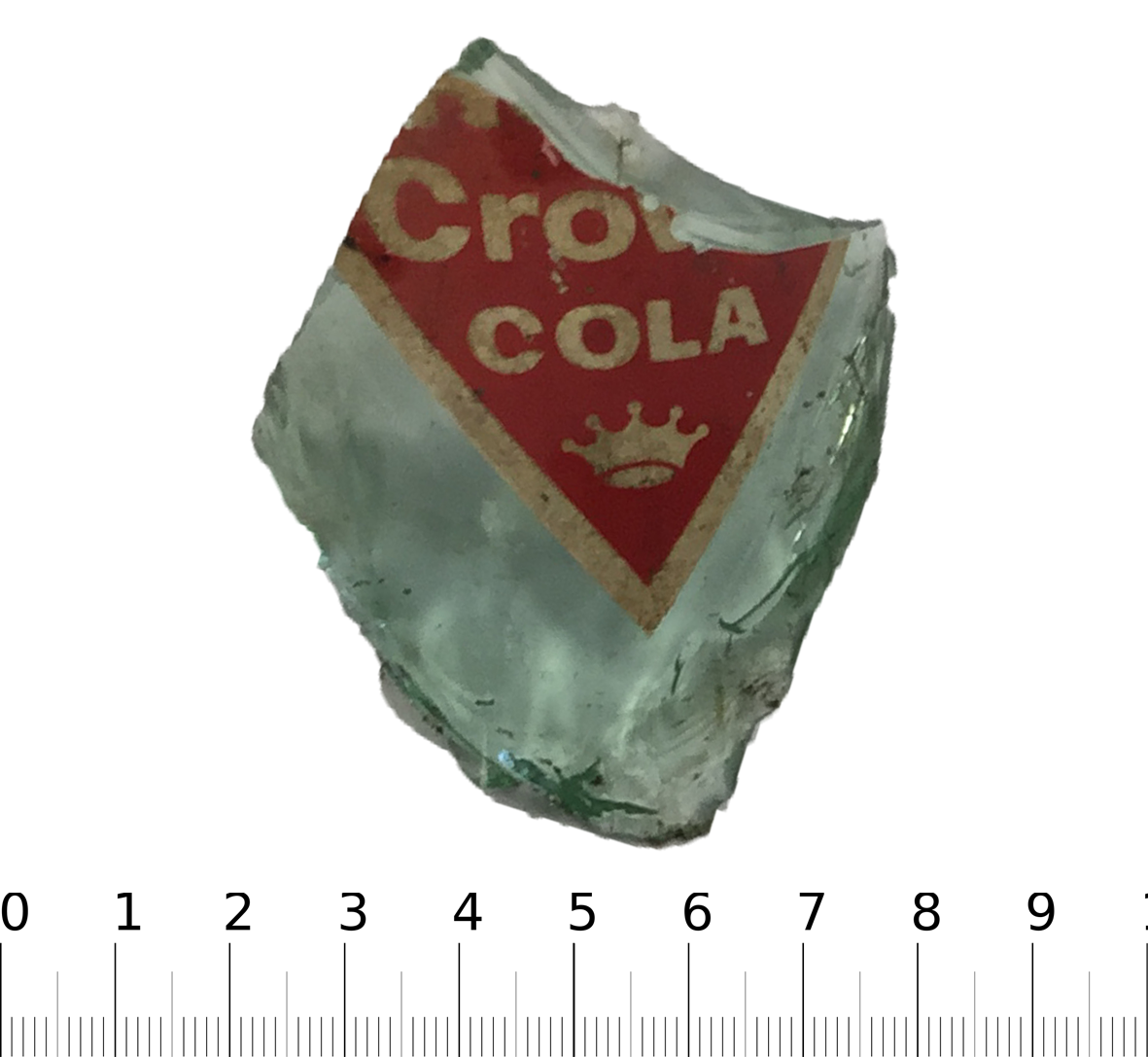 Crown Cola bottle from B2, lot 2 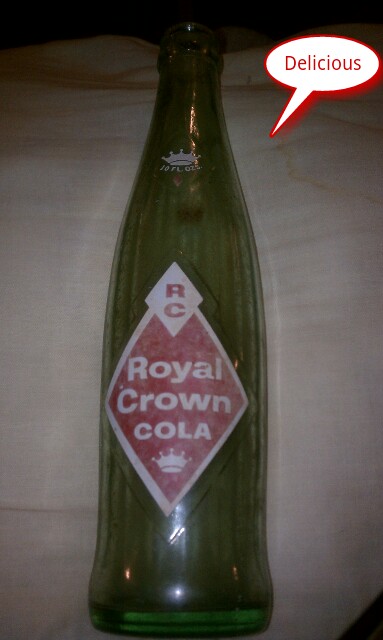 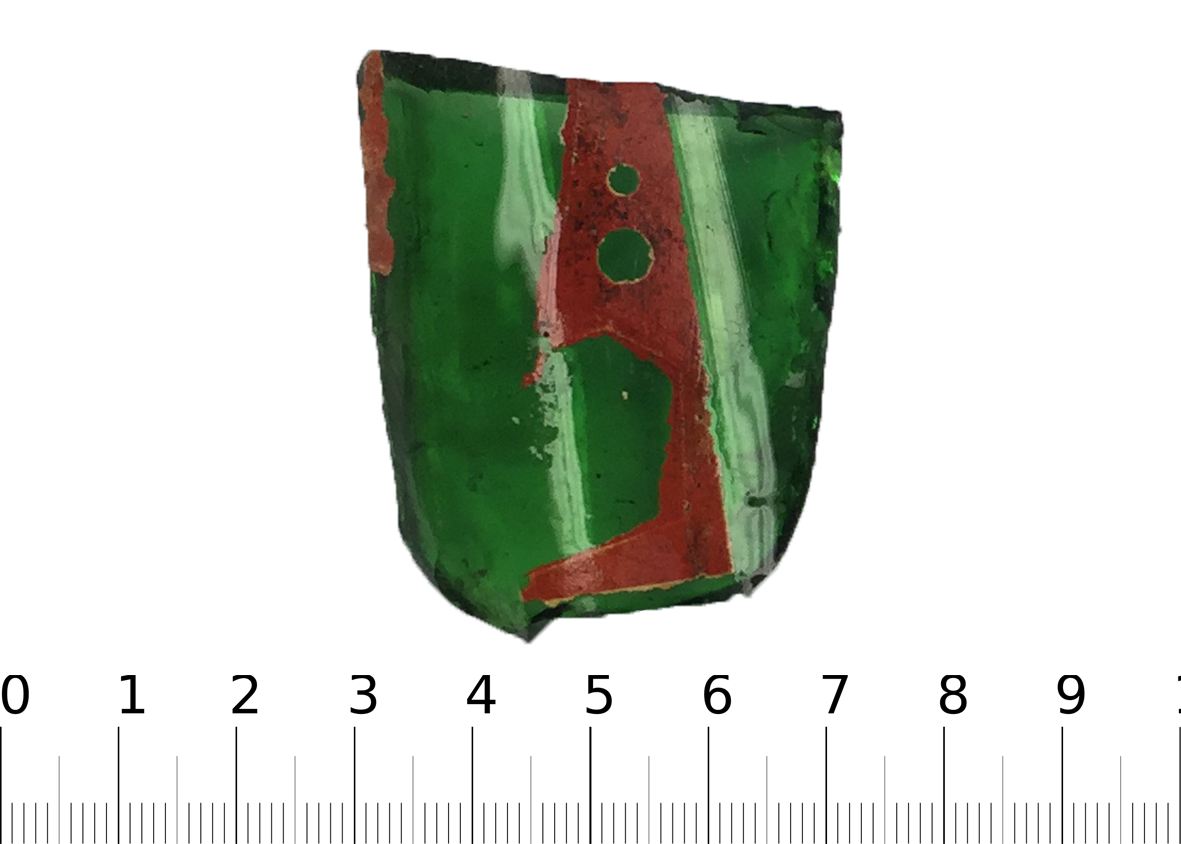 This small piece of green glass (about 4cm in length) appears to be a section of an old 7Up bottle from the 1950’s or ’60’s. As with the “Crown Cola” fragment, we can use online resources to match our fragment with existing examples. See the image below for comparison: 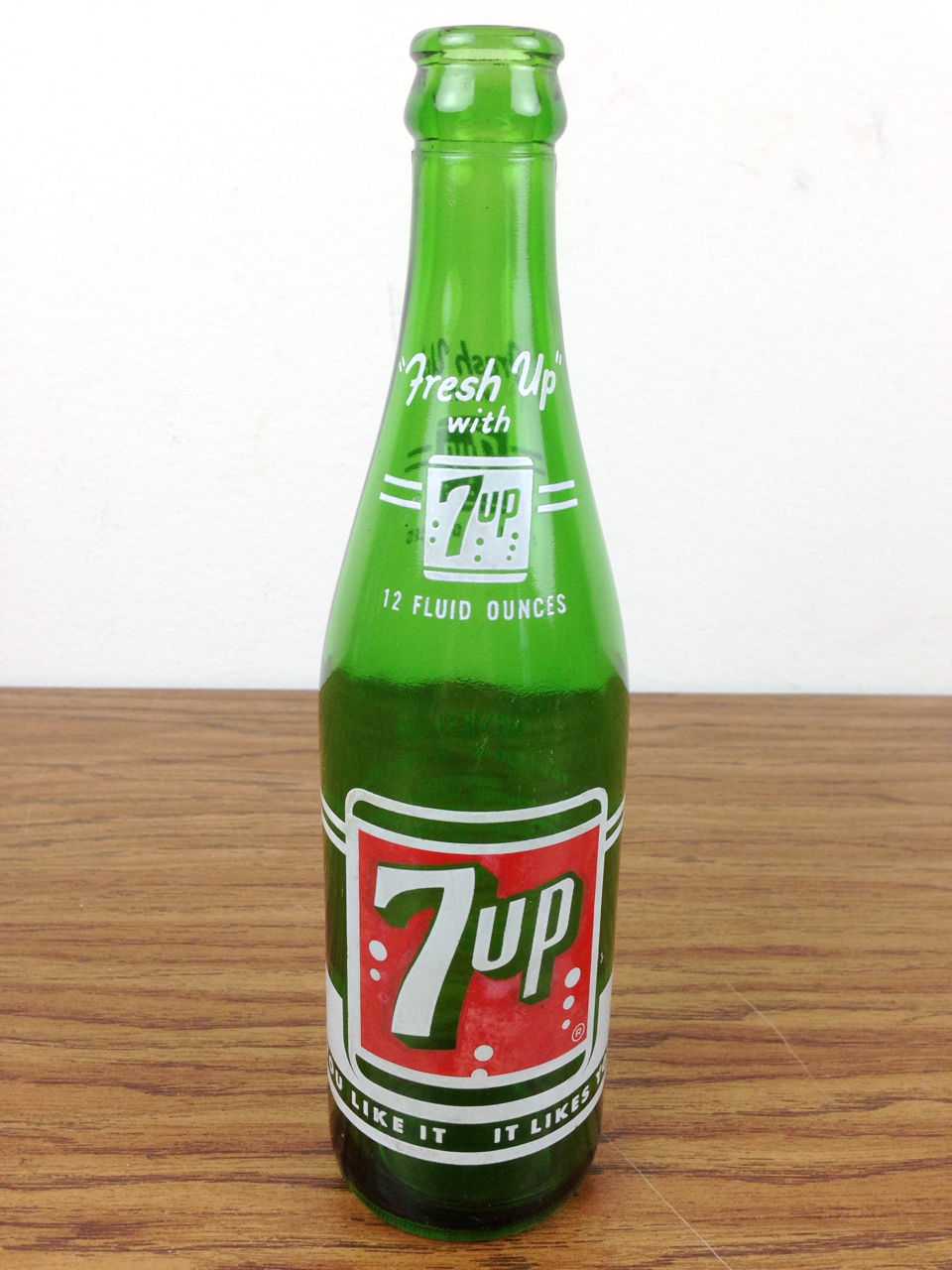 These artifacts depict the variety of objects an archaeologist may encounter during a field survey. Many archaeologists stumble across unmatched shoes while conducting fieldwork. We included the images of the golf balls as a precursor to our findings at the Pine Hill Village site, demonstrating the evolution of archaeological sites of interest. 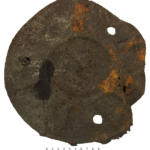 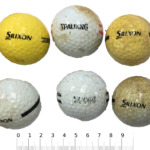 A variety of golf balls found during the survey 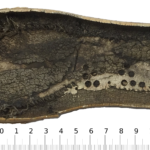 A shoe found in survey unit B4, lot 2

Most of what we found during our one-day archaeological survey of the cornfield can be classified as modern day trash; however, we did find certain elements indicative of the natural history of the area, such as the bones and the shell. It is important to keep in mind that the cornfield has been plowed many times in the past and a regular unearthing of these artifacts was not uncommon. There is also a busy road running alongside the field which may have contributed to the diverse items of trash we found and collected during the field-walking survey. Overall, this archaeological survey was a good way to learn and practice how to set up and perform a systematic survey. After this exercise, we were able to apply these techniques to our real archaeological survey and excavation of the Pine Hill Village site.