Geographic information systems, or GIS, is a method for recording, analyzing, managing, and presenting geographic or spatial data. It has far-reaching applications in a variety to fields, including climatology, natural resource development and conservation, and (most importantly to us) archaeology. GIS is an increasingly important tool in survey archaeology, as it allows for the creation of very detailed site maps that can then be integrated with data from other sources like intensive survey.  This technology allows us to combine GPS data, satellite imagery, scanned blueprints, and photos.  Most significantly, we are able to add the Women’s League Cabin project data to a map like survey and excavation findings. 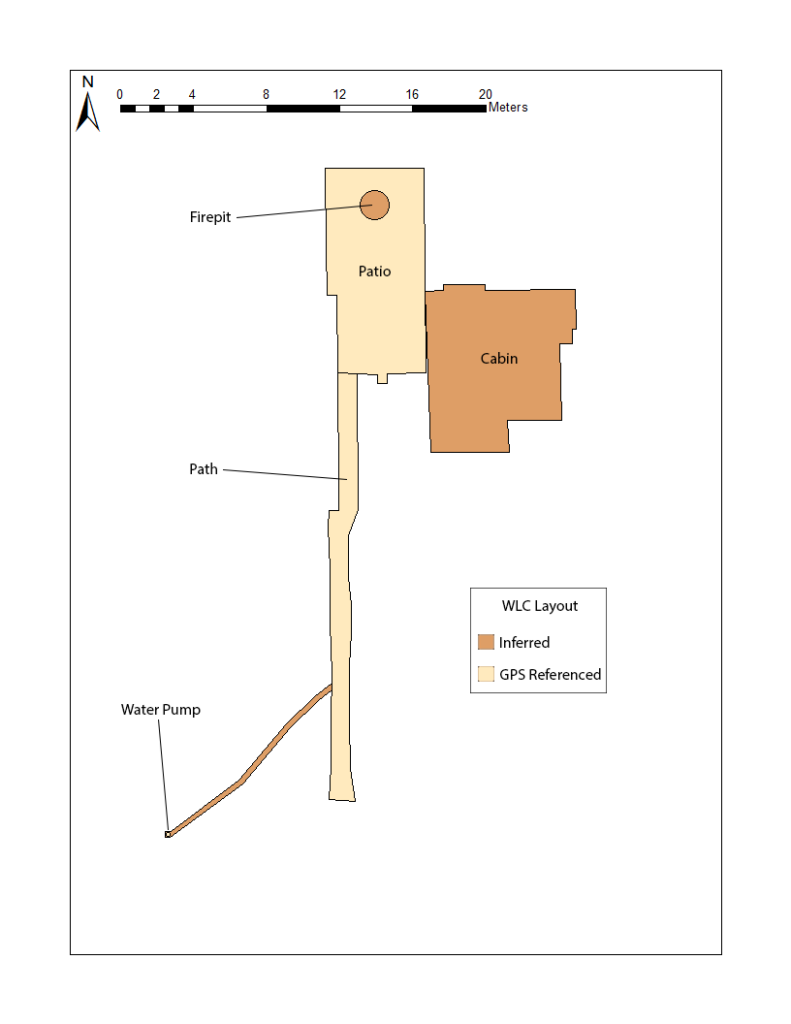 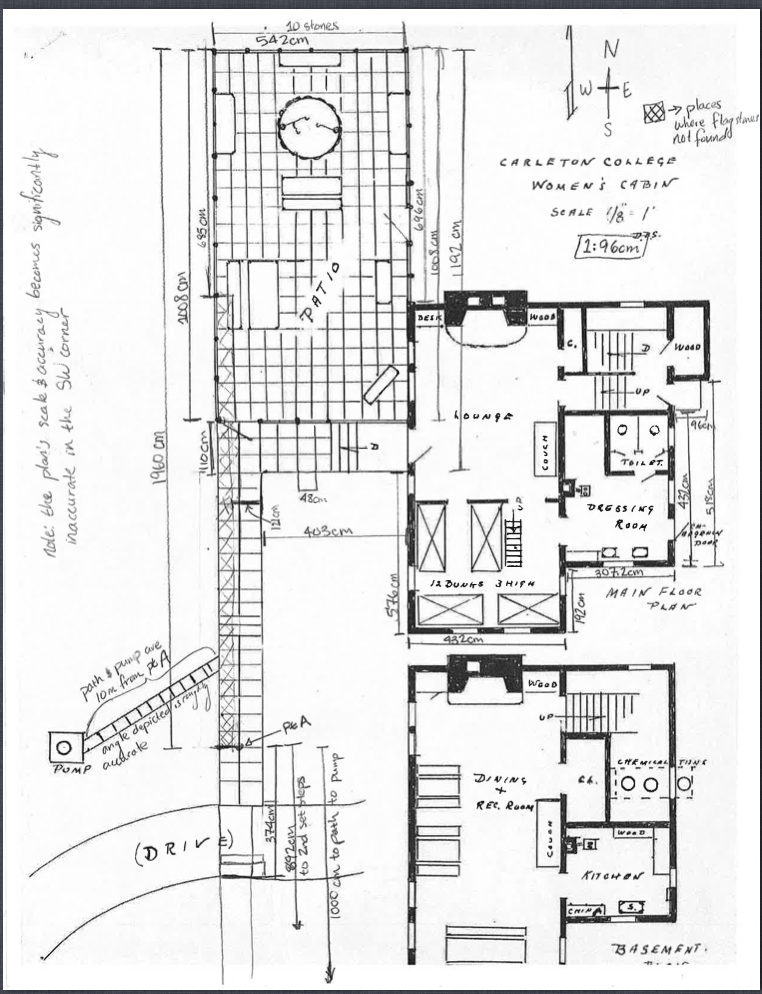 We created the architectural site map in ArcMap by linking GPS points, taken with the total station, to one another. These points were taken along the path and at the corners of the patio and used to help draw in their outline. Once we had created the initial map of the Women’s League Cabin site’s architecture we then used ArcMap to geo-reference an old blueprint of the cabin to our existing data. We linked known points on the blueprint with GPS points taken with the total station. This allowed us to see the blueprint in relation to our preexisting data and architectural map. By looking to the newly spatially referenced blueprint of the Women’s League Cabin we were able to trace the outline of the destroyed cabin and firepit and draw an approximation of their locations onto our map. The cabin is located primarily within SU-C3, which makes sense within the context of the artifact distributions discussed later. Additionally we took GPS points along the small path leading from the main path to the water pump. As these points were taken in the center of the small path we had to approximate its width when we drew it into the map. Overall it is our hope that these maps will give us a better understanding of the architecture at the Women’s League Cabin site and its relationships to our other findings.

We have made two interactive maps.  The Survey and Excavation Site map shows artifact distributions at the cabin site and at the fields. Trench locations and site specific photos of our work are included as well. The Historic map overlays a 1938 satellite image with the cabin blueprint, trench locations, and survey grids.  Both maps include the location of structures like the patio, path, and estimated location of the cabin. Use the Layers tab to toggle features on and off.

Our goal for this map is to give you the ability to both look at and interact with our survey data from the cabin site and the field survey. The density of finds of each type of artifact are included as different layers that you can toggle on and off to visualize their distribution, i.e. you can view the distribution of metal artifacts found at the cabin site. We’ve also included pins that mark the location of the three excavation trenches at the cabin site, and another at the site of the old water pump.

This map is intended to give an idea of what the Women’s League Cabin looked like when it was standing. Toggle the layers to compare the cabin site to the blueprint and the satellite image.  Within the architecture layer, tan shapes represent GPS measurements that we took for the patio, and orange shapes are based off of the blueprint.

To allow for a more thorough discussion of the survey findings, we have included individual maps below that provide a side-by-side comparison of artifact distribution within each category. 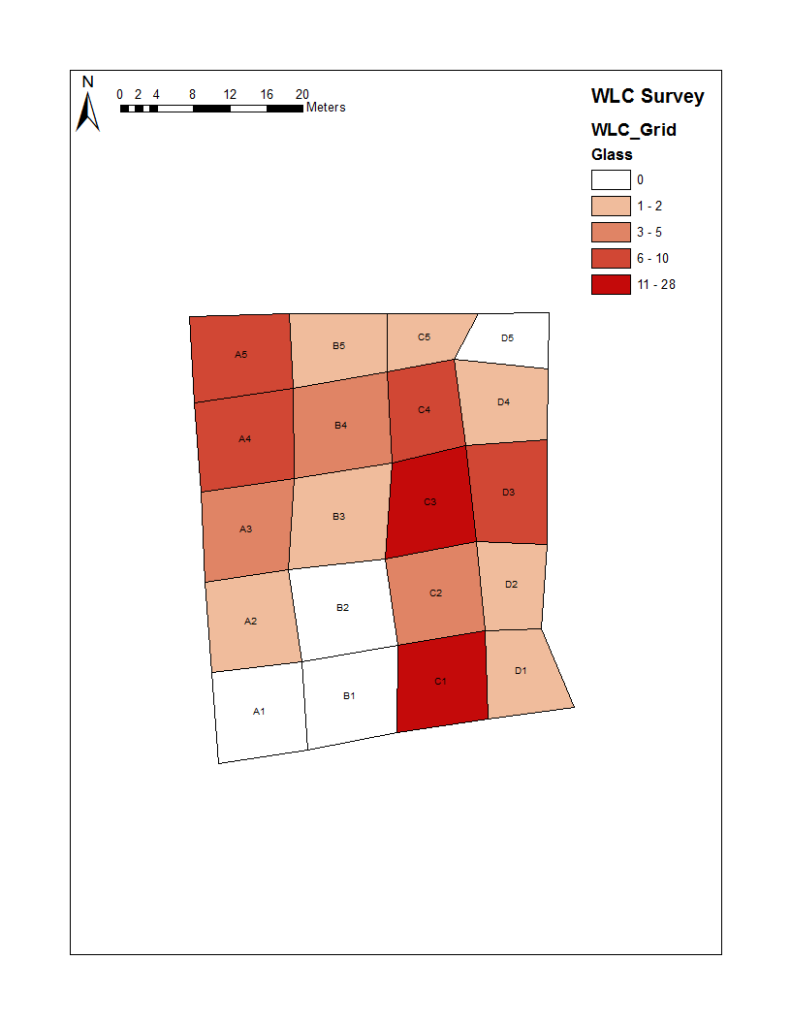 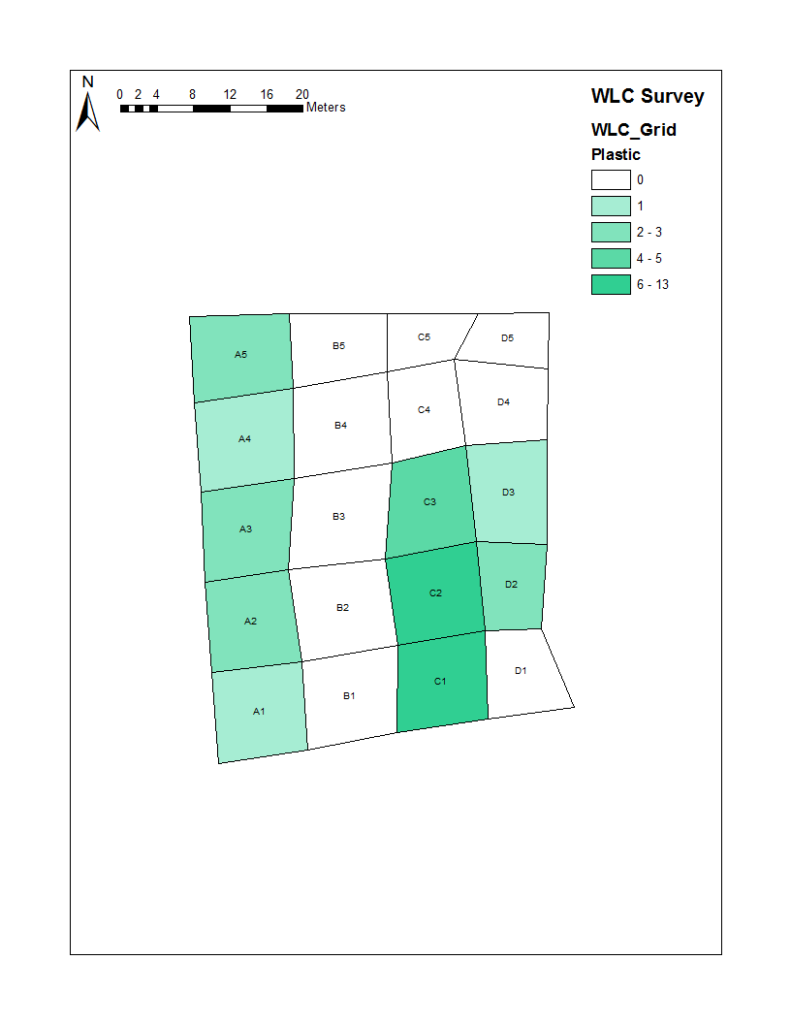 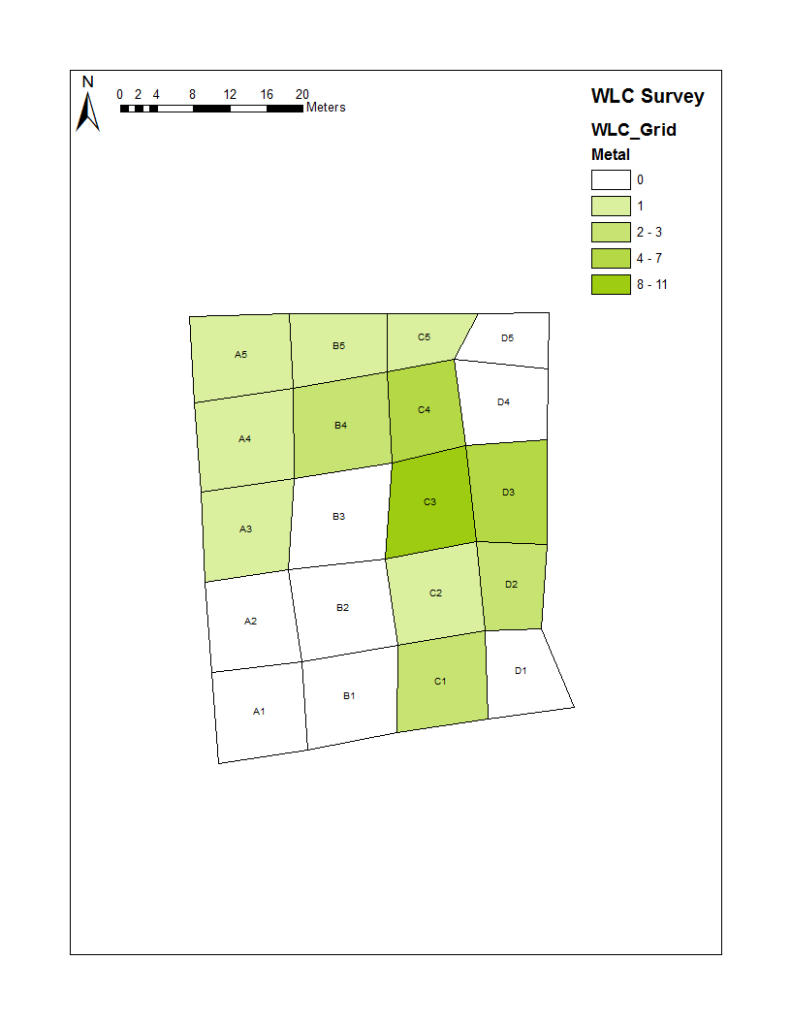 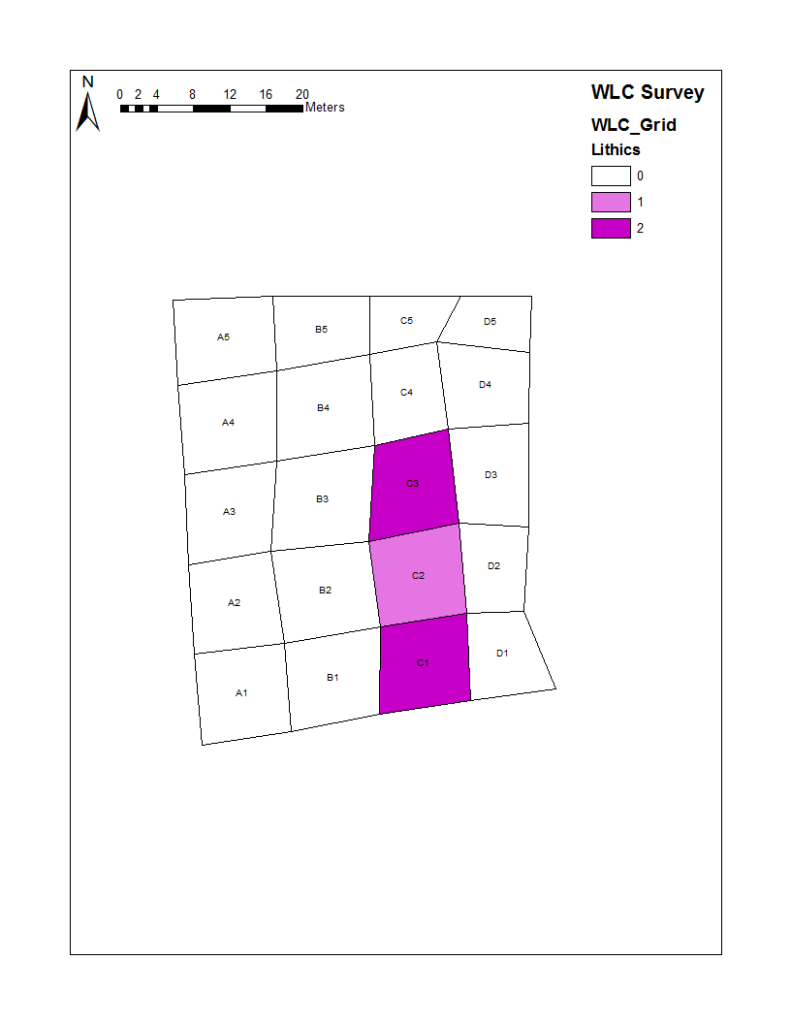 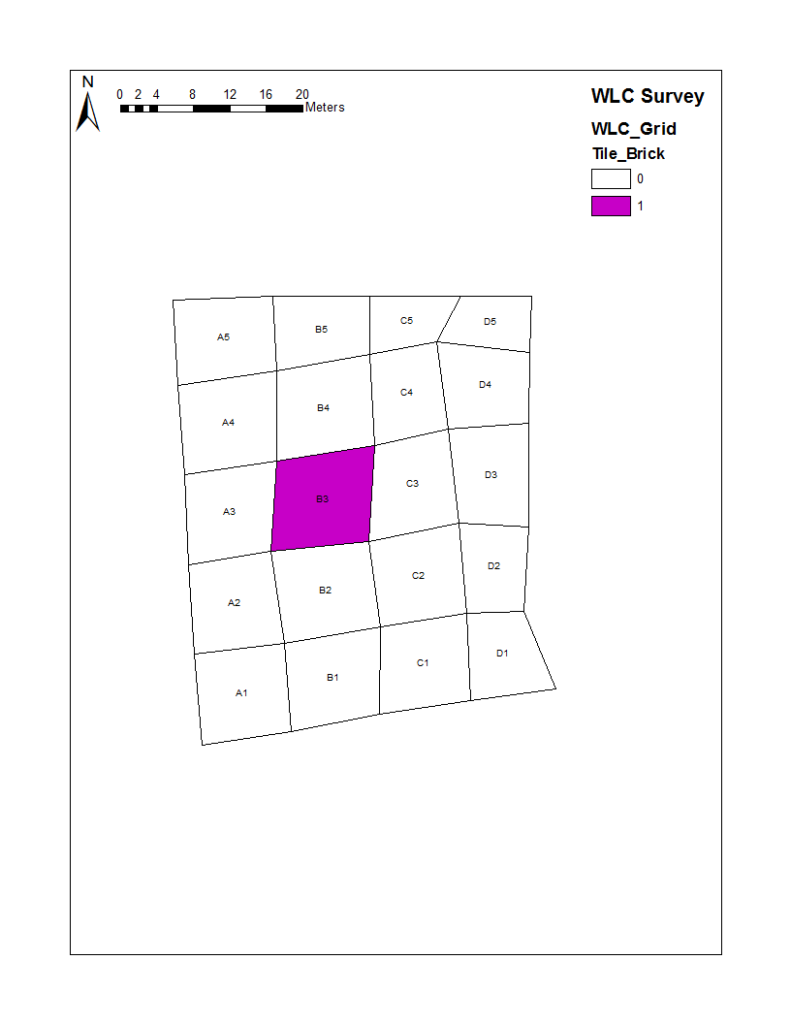 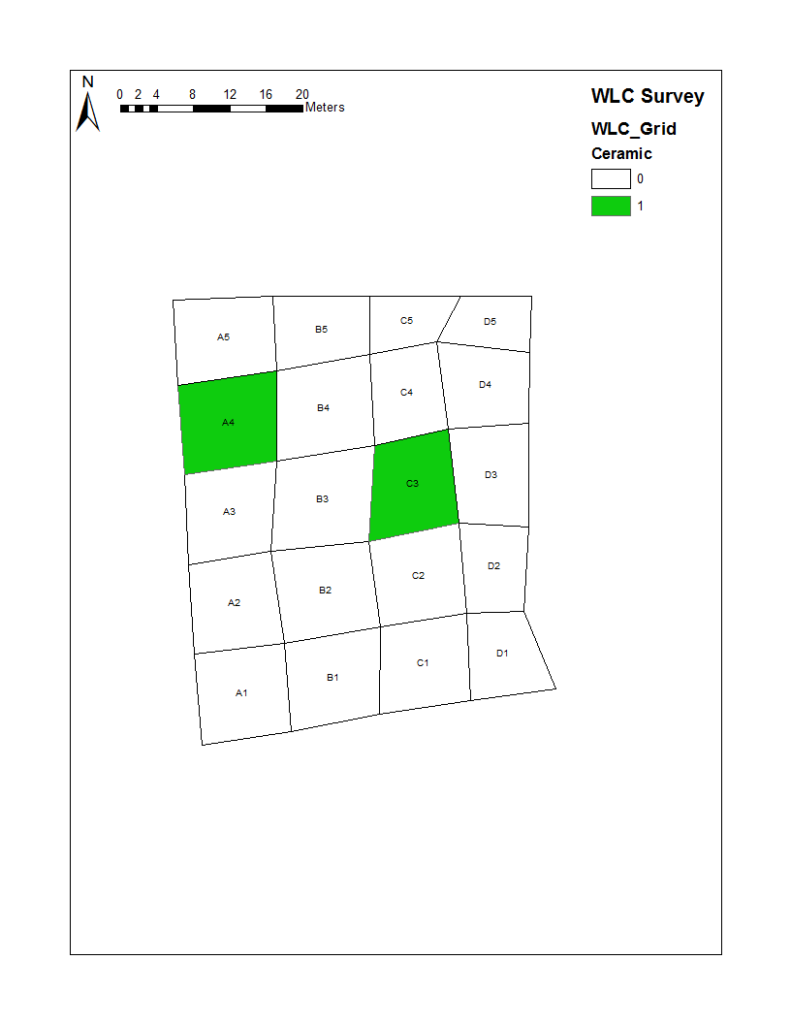 These distribution maps show artifact concentration patterns within the entire WLC survey area as opposed to individual survey units. Several patterns are noticeable in the maps.  First, the high concentration of artifacts in survey unit C3 is noticeable in most maps.  In general, a concentration can also be observed extending south from C3 into survey units C2 and C1 in several of the maps.  Considering the layout of the structures in the site, we imagine that this artifact concentration could exist due to its proximity to the cabin and the path leading away from the backdoor where foot traffic was high. Glass, plastic and metal were the three most commonly found artifacts in the Women’s League Cabin survey area, making their patterns more informative.  The A column, particularly A3, A4, and A5, has a relatively high concentration of these artifacts.  It makes sense that this area had higher concentrations because it is at the base of a hill, which raises the possibility of secondary deposition due to gravity.  The glass may have been deposited in this location after being thrown fire pit on the patio above.  Additional artifacts, as well as some glass, would have been deposited secondarily at the base of the hill after natural processes like erosion, as well as the demolition project that discarded debris at the base of the hill.

The map with the pie charts overlaid on the survey units shows the concentration of artifacts from the five most common categories: metal, glass, ceramic, tile/brick, and other. The vast majority of the artifacts catalogued under “other” were pieces of charcoal. It was suggested that charcoal was thrown out the kitchen window or the back door of the cabin after use, which would fit with the high concentrations of “other” items in unit C3, which was located directly below and behind the cabin. Since this was also likely the backyard of the cabin, residents could have used charcoal to cook outside. Secondary deposition after the structure was razed could likely account for the charcoal’s presence in other units.

This map ties the information found in the individual maps into one more cohesive unit.

The following trench maps outline the trench layouts and findings.  Contexts are different layers of excavation. A change in context represents a change in soil.  Generally, context 1 is uncovered fist with higher numbered contexts uncovered below it later.  The Trench layouts show how the context would have stacked on top of each other.  Additionally, the excavation diagrams show the contexts side by side so the findings can be displayed.  This is not how the contexts are found spatially. They represent layers that were uncovered below one another, as shown on the left. 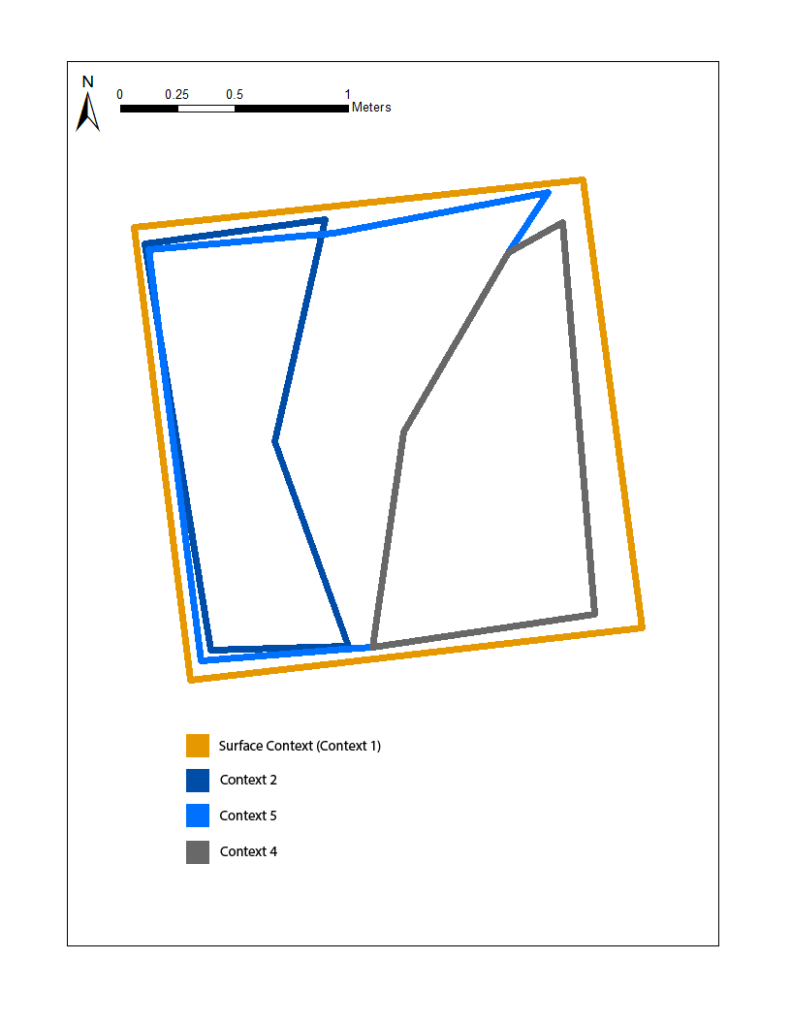 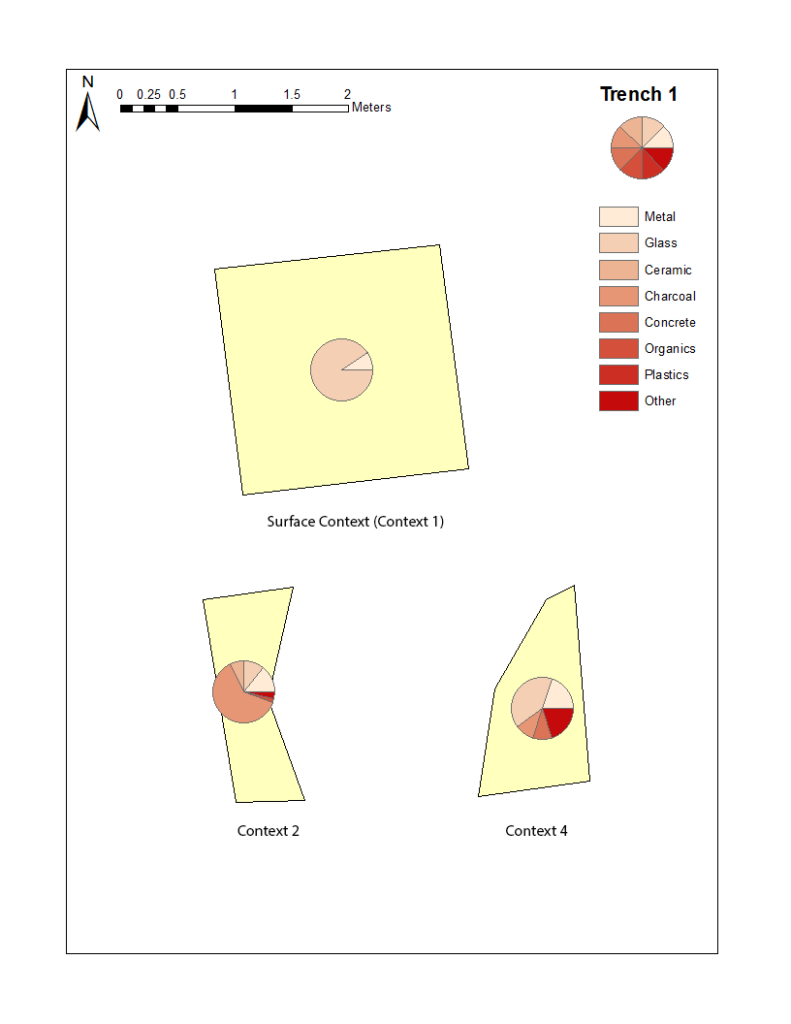 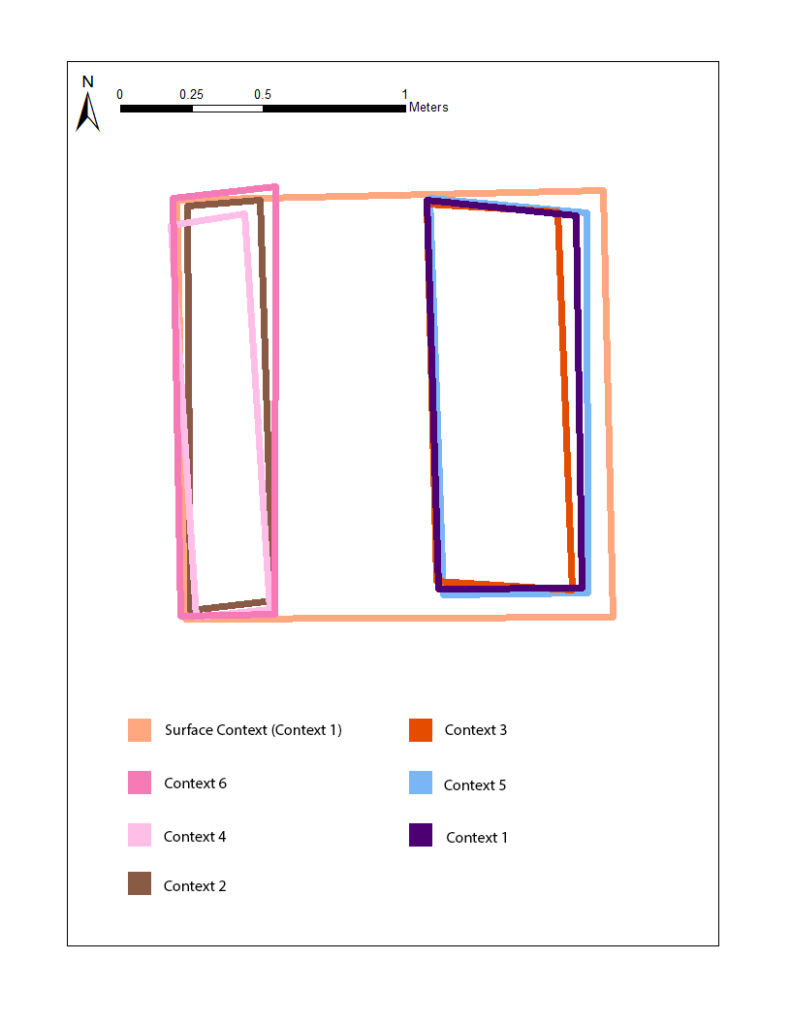 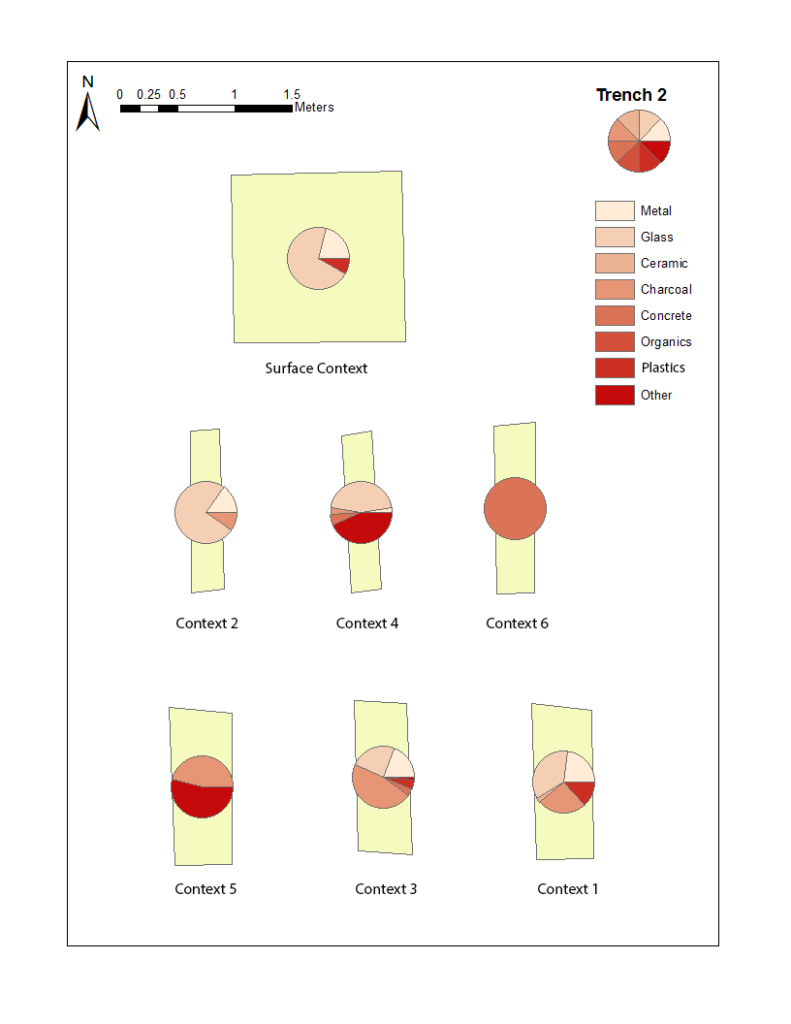 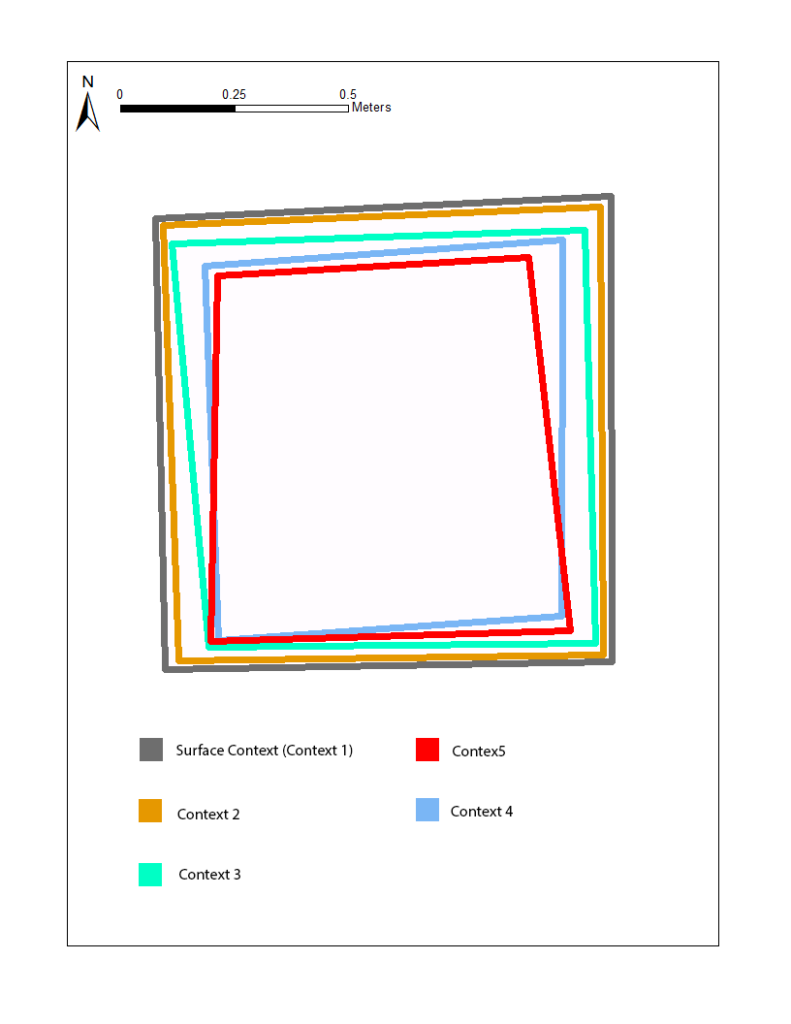 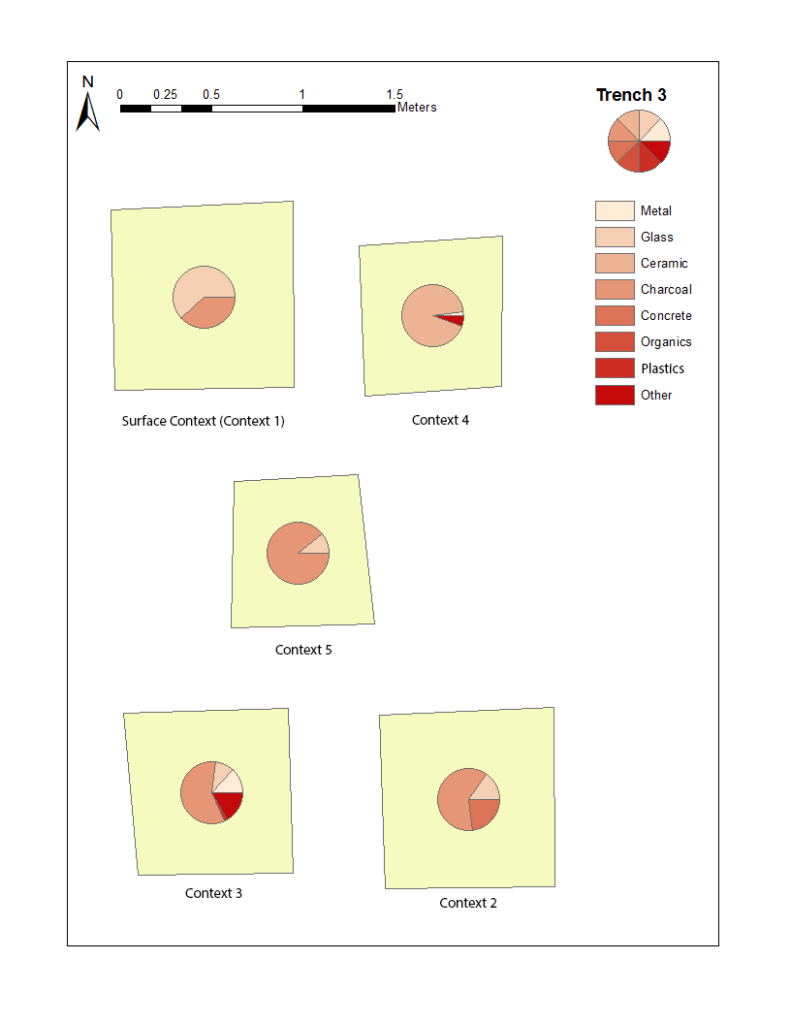 These diagrams help us to see the density of artifacts in each individual context and in turn locate patterns that only become apparent when looking at the data in this format.  One of the first and most important things shown to us, by these maps, is that the middle contexts appear to contain the highest distribution of diagnostic materials. Trench 1 Context 2, Trench 2 Context 3, and Trench 3 Context 3 are excellent examples of this.  Additionally the upper levels are filled with glass and plastics while the lower levels contain mostly glass and materials labeled as other.  We can infer from the lowermost contexts that the site experienced little use before the cabin’s construction.  The high density middle levels correlate to the peak use of the cabin by the college. Finally, the uppermost levels appear to represent objects deposited after the cabin’s demolition.  All of this data helps us to make inferences about the use, and intensity of use, of the cabin during each time period.  Looking at the data in this way is only possible due to the visual format provided by GIS.