On Monday, before class, we went to a talk about why archaeology matters today with Professor Jeremy Sabloff, formerly of Penn. On Tuesday, during class, Professor Sabloff joined us and talked about his research at the Sayil site in the Northern Yucatan in Mexico. This site focused on topography and trying to understand the organization of the Maya in that area for normal people. He also talked about the technology the project used, specifically LIDAR and the ability to see the agricultural terraces and roadways of the site. We then connected that to survey sites that we had looked up before class from around the world. Students were able to ask Professor Sabloff some questions, and thought about how his work and their sites might connect to our class research.

Then, we went out to the Pine Hill Village site to begin our own research surveying the area. We set up the grid based on Alex’s map that proposed the site location as a series of 10 by 10 meter survey units, as shown in the link above. We started from the southeast corner of X16, then used 50 meter tape measures at angles of 315 compass degrees and 225 compass degrees to set up the edge of the survey area. From there, we used string and stakes to mark the edges of the survey area, then pink ribbons to mark off individual survey units. A group of students worked at this for the whole time we were in the field, and were able to set up survey units from T-X and 13-16. 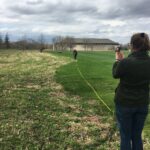 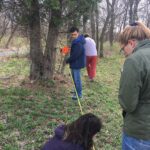 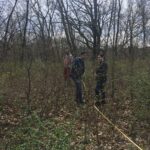 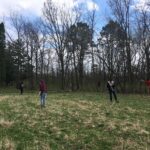 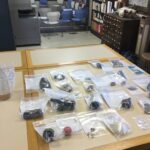 Once the survey units were adequately marked, 10 students began the process of actually surveying the units. To do this, they split into groups of two people per square and did an intensive survey of the squares, noting any artifacts or features they found on survey unit forms. They then took those artifacts and bagged them by survey unit and material, so we can analyze them further at a later date. Among the artifacts we found were glass bottles, tennis and golf balls (which probably are not that useful) and general plastic stuff. Those groups were able to completely survey units T-X of rows 15 and 16, and U and V of row 14, as shown highlighted green in the map below.

Finally, three students went with Claman to use a Differential GPS (DGPS) to mark features in our survey area. The DGPS allowed them to this with centimeter accuracy. While one person marked the location of the features, including the fire hydrant, a cement block, a pile of rubble and the path down to Goodhue, with the DGPS, one person was taking photographs and documenting each feature, while the other filled out feature forms.

Thursday, we took what we learned from the field on Tuesday and from outside research to discuss where we should go next with the project, with regards to both survey work and excavation. Some potential excavation locations to start on next week include the fire hydrant, the stairs to Goodhue, or any possible patios or outdoor spaces we may be able to discern from maps or artifacts we found while surveying. We also thought a little about potential research questions, largely focused on the family aspects of Pine Hill Village and the memories and stories of the people who lived there, some of whom are still alive, so we could possibly do a related ethnography. We also connected these further proposals with readings we did from Renfrow and Bahn and from Deetz, specifically in the context of social archaeology and societal analyses.