To supplement our lab work on the excavation of the Millpond Dike, we began research into the documentary record to discover more about the construction of the dike and its relationship to the Waterford Mill. We hoped to find records that documented when, why, and how the dike was built, as well as any connections to both the mill and the possible quarry site to the east of the dike where we did other lab work. We searched for not just specifics about the dike itself, but also the context in which it was originally built as well as how it still exists today in the Cowling Arboretum.

Looking through the Carleton Archives, there was not much of anything that referenced the dike or the mill. Sifting through the Carleton Digital Collection was slightly more successful, though most of the documents that mentioned the dike were biology research papers looking into either the local plant life or wildlife of the arboretum, including an extensive survey of a wood turtle.

The general lack of documentation regarding the dike is not surprising. According to a 2013 report evaluating Minnesota’s Dams and their histories, the first mill dams (and presumably their accompanying dikes) were built without formal oversight. In fact, most historical dams and dikes are only referenced in the documentary record when “in regard to destruction by floods or their need to be rebuilt.” In 1874, the manual Construction of Mill Dams, Comprising also the Building of Race and Reservoir Embankments and Head Gates, the Measurements of Streams, Gauging of Water Supply &C. was published which helped to centralize the process. As our dike was built around that time, it stands to reason that it may have not even consulted that source, let alone registered with any municipality as is the Minnesota law to this day. Furthermore, the longer a dam or dike is used, the more likely it is to need to be rebuilt, thus increasing the chance of leaving behind a documentary record. Our dike, however, was in operation for just a few decades. The same Minnesota report detailed that by 1910, over 900 mills had already been abandoned due to shifting electrical sources; many of these had just previously been established. Our mill, dam, and dike fell into these foreclosures. 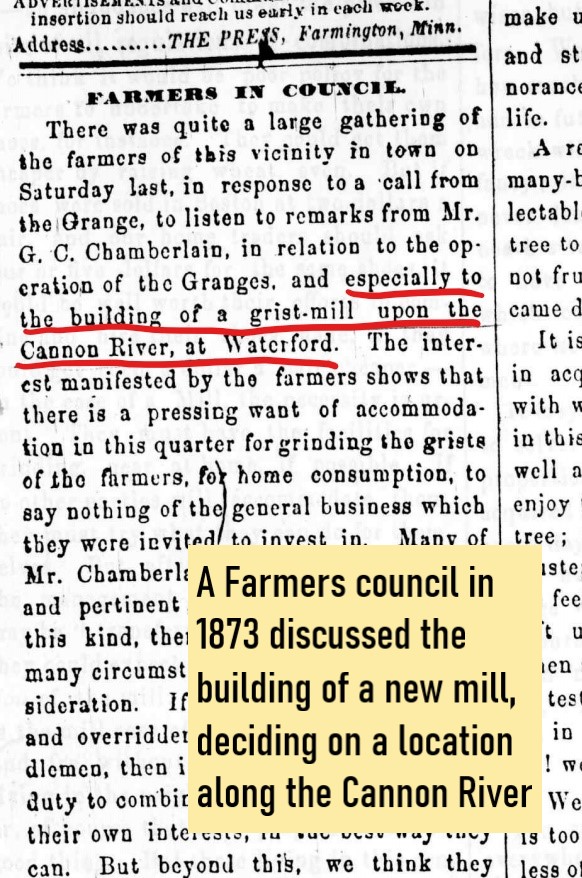 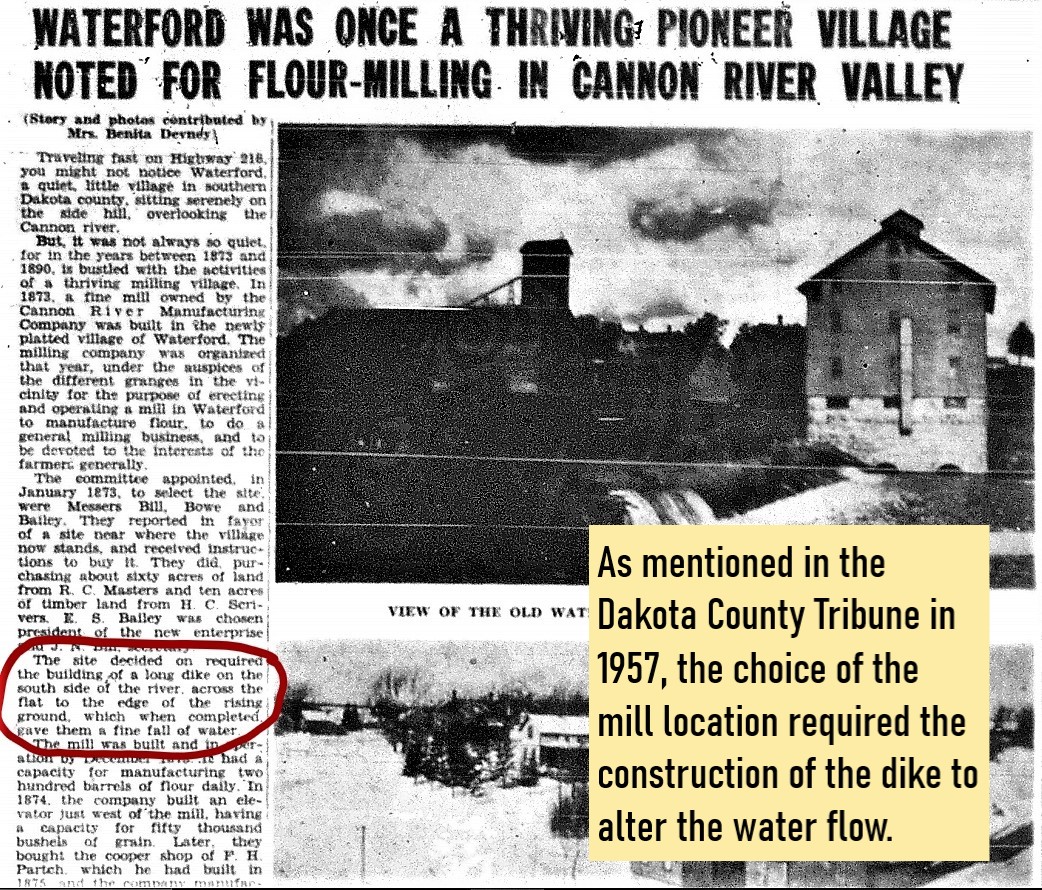 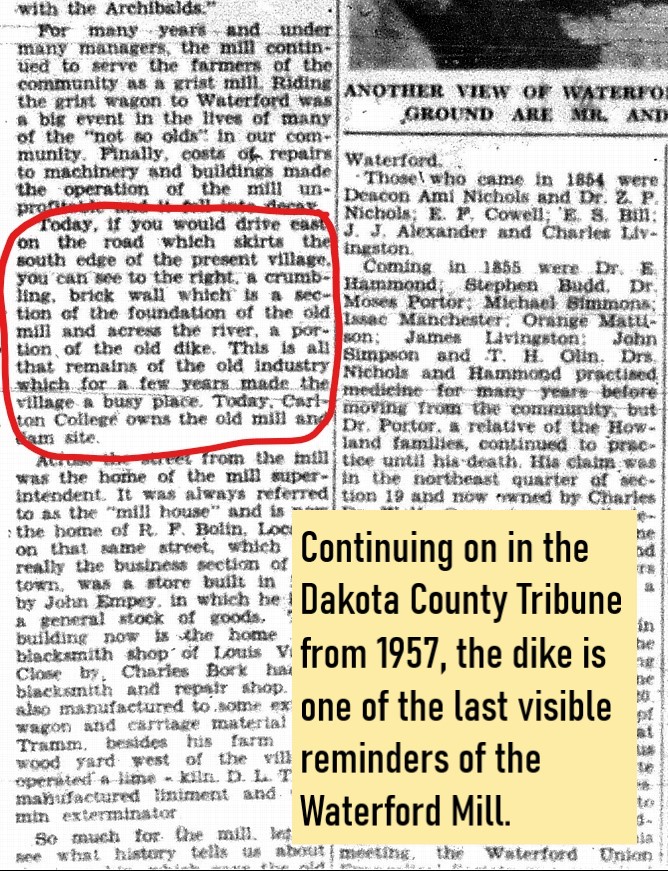 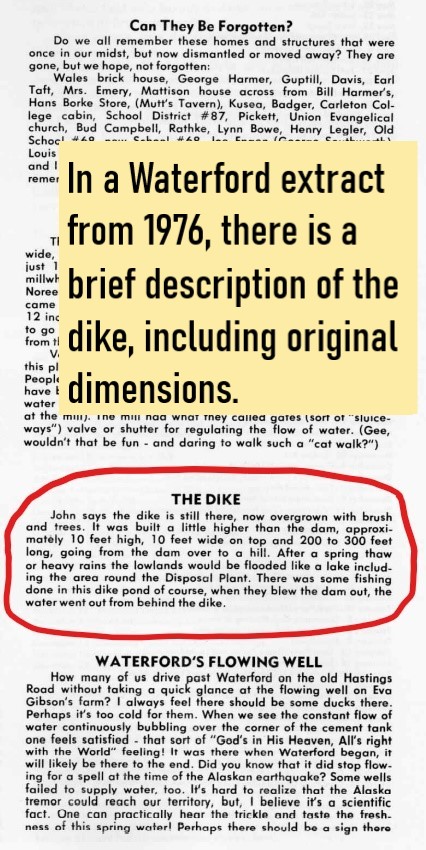 Four sources were provided to us from the Dakota County Historical Society, as seen above, offering a glimpse into the history of the dike and how its construction was directly related to the history and development of the Waterford Mill.

In the Farmington Press, 1873, a group of farmers gathered together to discuss the building of a new mill, including its location and function for the community. There were many considerations into its construction, including requirements for the mill, the most important being easy accessibility to the local farmers for transporting products to and from the mill. A decision was eventually reached, placing the new mill along the Cannon River to make use of the water power. Although there is no direct reference to the dike itself in this document, the choice to build the mill next to the river required the construction of a dam and dike.

In the Dakota County Tribune, 1957, while recalling the history of flour-milling in Cannon River Valley, the Waterford Mill is brought up as an important milling site for the area from 1873-1890. In direct reference to the choice of placing the mill along the river, the newspaper explains how this necessitated the construction of a dike on the south side of the river to redirect the water flow. Continuing through the history of the mill, on the second page, there is one more reference to the dike. After the mill shut down in the late 19th century, it fell into disrepair. By the middle of the 20th century, all that remained of the Waterford Mill was a crumbling brick wall and the dike across the river, which still exists today as a footpath in the Arb.

In the Waterford County Extracts (1976), which documents Waterford history from 1852-1970, the dike is once again directly mentioned as an important element of the industrial history of Waterford. Redirecting the water into a large pond on the west side, the dike allowed for local fishing, another function it served for the community. The extract states that the original dimensions of the dike was 10 feet high, 10 feet wide along the top, and about 200-300 feet long. This is much shorter than the length today, which we measured to be around 350 meters (roughly 1100 feet).

While searching for an explanation for this discrepancy, we figured that the dike could have been expanded sometime in the early 20th century. One possible idea we found was in a budgetary report for the Carleton Arboretum from 1929 that describes a massive expenditure on the ‘Waterford Property,’ which includes the land of the dike. While the document only states the cost was for “other work” to be done on the land, they could have used these funds to expand the dike to its current length, perhaps with the intention of transforming the feature into a pathway, which is how it is still used today. Although this is speculative, it possibly reconciles the documentary record and our measurements of the dike.

Another document we discovered that supplemented the sources above, “The Indian Pathway Through the Carleton Arboretum” from 1998, found in the digital archives of Carleton, is a detailed report on the Native American history of the land in the arb. Throughout the document, there are several mentions of the Millpond Dike, stating its construction as at the same time the dam and mill in 1873, a confirmed date based on the earlier documents. The report also asserts that to the west of the dike, there is a large flat area that was “once a hill quarried to construct the dike.” This information contradicts our initial thoughts on the connection between the dike and our quarry site, which lies east of it. However, we were unable to confirm the claims from the report since we could not find the source they used. Despite this, the document provided two good maps for a better visualization of the area (Maps 1 and 2).

Due to the lack of documentation and the uncertainty in the reliability of our sources, we were unable to confirm any connection between the dike and the quarry site just to the east of it. Despite the limited sources we had available, we were still able to piece together the history of the Millpond Dike and its direct connection to the Waterford Mill as a necessary construction for redirecting the water backed up by the dam. Still in effect today, the Millpond Dike serves not only as a subtle reminder of the milling history of Northfield, but also as a lovely path through the Arb.

“The Indian Pathway Through the Carleton Arboretum,” 1998. Carleton Digital Archives