Before selecting the trench locations, the lab collectively delegated and decided to further examine this specific larger area in the arboretum. We hypothesized that this location was a quarry in the past due to rock formations and the outlay of the landscape. So, we established our general site area, and mapped out the gridded survey units of the quarry site. We then did some preliminary ground walking surveys of a few different survey units of interest before choosing specific locations to excavate.

The location of this trench was selected due to a very obvious rock formation slightly buried under foliage in survey unit L12. The rocks seemed to have very distinct, straight, and geometrical cuttings to them (Fig.1,2,3). This seemed to be anthropogenic and potential proof of a former quarry site, so we decided to further investigate with hopes of proving our hypothesis. While the trench excavation did not bring about many artifacts, it did reveal some insight on the area as a potentially former quarrying site. And once we hit bedrock, we formed our own personal analysis and hypothesis about the usefulness of this specific rock for quarrying in general.

Naturally, we constructed our trench around the rock formation, due to it being our major point of interest. We measured a 2 meter by 1 meter rectangular trench and marked the perimeter with stakes and string. We made sure to construct the perimeters of the trench with the rock formation falling in the upper (location? (northern..dunno)) third of the trench. This allowed us to further examine those rocks which seemed anthropogenic in nature, and all that was immediately surrounding it. A 3D model of the fully excavated trench is displayed on the photogrammetry page.

In our excavation process, we used trowels, root trimmers, brushes, and dustpans, buckets and a sieve with ¼” mesh in order to sieve through our discarded dirt. We reached bedrock in the upper (check directions…) after removing less than an inch of dirt. And the deepest part of our trench was about 4 inches deep in the lower (far right corner. Check directions.)All together, it took 3 days of excavation to reach bedrock throughout the entire trench. 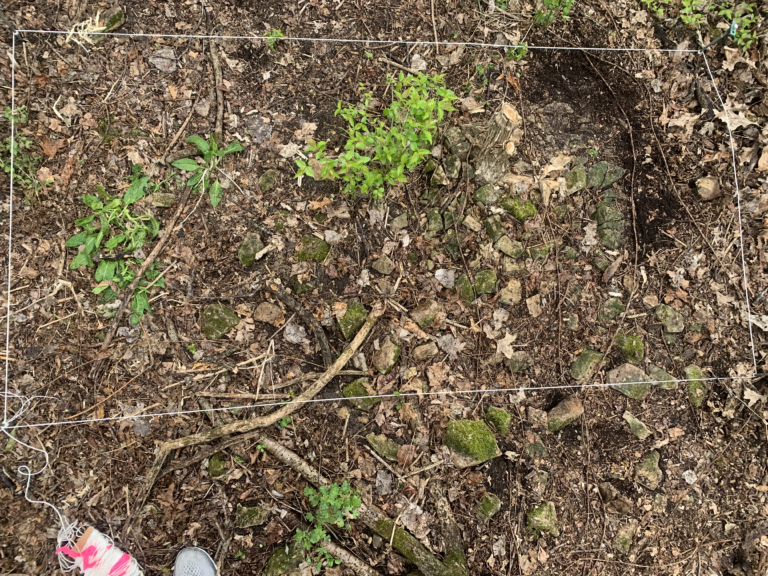 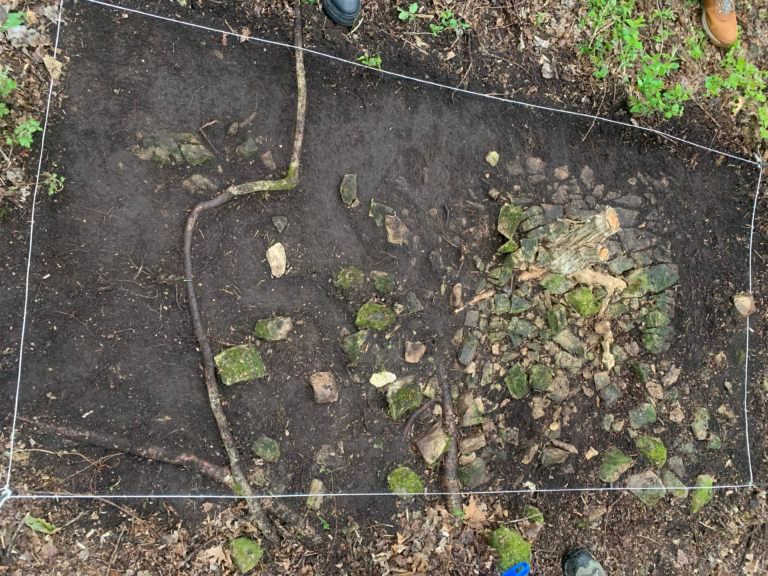 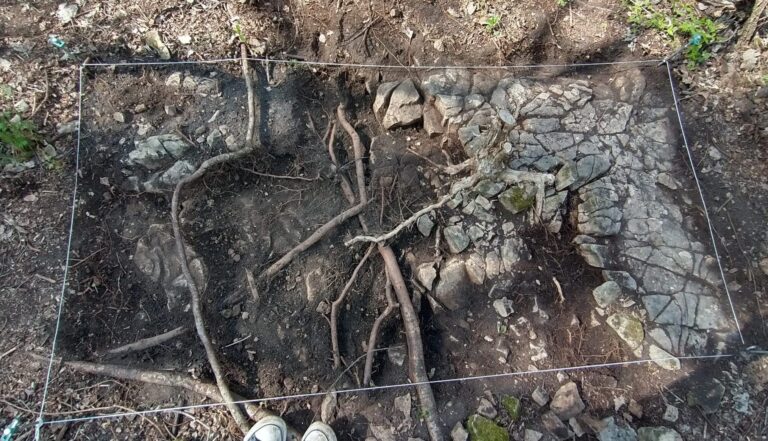 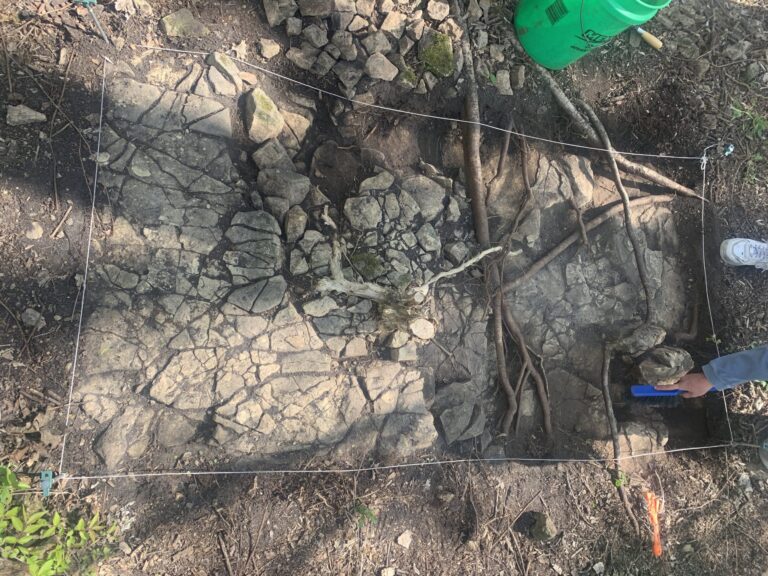 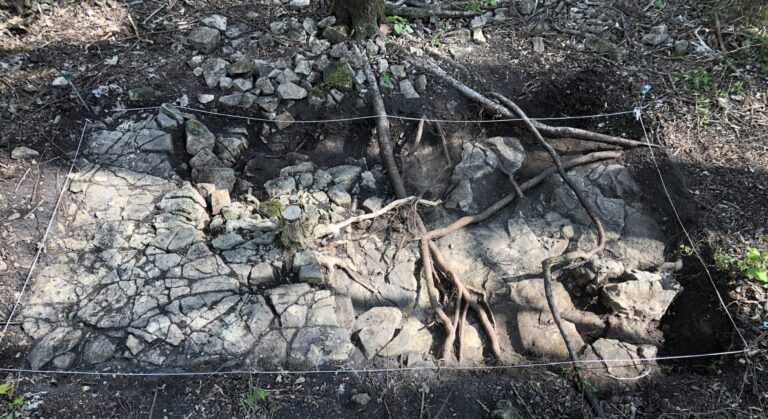 This trench consisted of only one context. We had definite topsoil but we never encountered a change in soil types. At times, it seemed that there might be a new context discovery due to very small patches of unearthed soil with a lighter appearance. However, with a little exposure, the dirt quickly dried and became the same color as the rest of the trench soil. So we just considered it all one context, topsoil.

The artifacts found were not significant in amount or chronological meaning, especially compared to those of Quarry Trench 2 in L10.  There were a total of 3 finds all together, two very small shards of glass and a small bone. The shards of glass have no indication of their origins. But after careful scrutiny and research, the bone appears to be a thoracic vertebrae of a small animal, potentially a rabbit or a raccoon. While our artifacts gave no evidence of a quarrying history, the overall excavation process did lead to some new insights. [insert pictures of the artifacts]

After comparing the substance of our initial rock formation to that of the bedrock, we have concluded that the rock formation and its cuts are not of anthropogenic origin. The original rock formation is of a softer, more brittle substance, which crumbles and breaks quite easily. We could drive a stake through this substance with a mallet and minimal effort. And further unearthing revealed similar patterns in rock further beneath the topsoil. However, there were no fractures or flaking of these rocks which would indicate that they had been broken or cut intentionally. Therefore, we concluded that those straight geometrical splintering which caught our attention are most likely of natural causes.

The deeper rock, the bedrock, in the lower (check directions), about 4 inches down, is made up of a much sturdier and solid rock. When compared to the top rock formation it is not as manageable or easy to break up. It also does not have the same straight lined fractures which were present in all of the rocks closer to the surface. From this, we have insinuated that the top rock formation is what most likely would have been taken from the quarry for use. Our trench provided no solid proof of human interaction and activity. However, we did ascertain that the rock most readily available from this area most definitely could have been of value and extracted and useful if this were a former quarrying site.

As discussed prior, Trech 2 was formed using the same gridded survey that contributed to the creation of Trench 1. Trench 2, however, contained an abundance of finds compared to Trench 1, which is likely due to its location. The process we used as a lab group to define these trenches began with the establishment of a gridded survey of the quarry site. Unlike Trench 1 (L12 of the grid), Trench 2 (L10) was in an area chock-full of trash and debris. The abundance of content and some of the more prominent rock features led the group to explore that area.

The goal of exploring this area and creating Trench 2 was to answer some questions that we had about the site as a whole, especially questions about the chronology of the site. We asked: What was the purpose of this location as it relates to the use of the site as a quarry? Following the excavation of the trench, what can we infer about its use relating to the quarry? Are there any items at the site that suggest older or more modern uses of the location?

We selected L10 as our location of interest and singled out a rock formation hypothesized to be a firepit. We consulted and decided to take a cross-section of the suspected pit instead of forming a 2X2 square around just the pit. This allowed us to capture the pit’s interior and the rock formations outside the pit, giving us additional context about our gridded area. Using a tape measure, string, and metal stakes, we marked a 2 meter by 1-meter perimeter of the excavation area. Next, we used trowels, brushes, and gardening shears to clear the surface, collecting visible finds along the way. The following step was to begin excavation.

The trench was divided into three contexts. The first context was the largest and most shallow. After just one day, bedrock made itself visible at no more than 2 inches below the topsoil. Context 2 was a small area with a deeper divot in the northwest corner of the trench. Context 2 varied from the first because it appeared to be a new soil layer, showing a light tan/sandy color. Going deeper revealed that the color change was likely due to the loose rocks above the bedrock being broken and weathered down. Context 3 of the trench encompasses the cross-section of the fire pit. We established this area as a new context because it appeared to be marked off by a barrier of slightly elevated rocks and because the inside of the area contained a large mixture of charcoal and topsoil.

The findings inside Trench 2 produced interesting and abundant results. Per the contents of the broader area, it is no surprise we uncovered large quantities of glass, metal can shards and tabs, and plastics. There were, however, some interesting finds that are atypical. These more exciting finds include a long metal nail, a shotgun shell casing, and a jig head fishing hook. While we still need to date and investigate these finds more, we can understand how they may loosely be related to activity in the area.

Starting with the fishing hook, there used to be a bridge that crossed the river not too far from our excavation site. In all the photos of said bridge, locals can be seen fishing. This could also help us hypothesize why the nail was there. Suppose locals commonly participated in outdoor sports and activities. In that case, it’s possible the nail could be a stake used to pin down a tent. However, we lack direct evidence to confirm these hypotheses. We were, however, able to gather information about the shotgun casing that we found.

There was little information on the casing of the bullet itself. The only information we were able to gather was a brand name, “Super X”. A quick search revealed that the brand Super X was founded in 1995, meaning that the shotgun casing is no older than 26 years old. This suggests that the origin of the casing could have to do with either delinquent activity or hunting. Given the fact that we only found one shell, it seems more likely that the latter is more plausible than the former.

Finally, after finishing the excavation of Trench 2, we cleared some of the surface area on the north end of the trench to examine whether we could identify a clear boundary marking a fire pit/ring. We were successful in doing so, outlining a small, roughly circular ring of rocks with large quantities of charcoal inside.  We also collected the surface finds without digging deep into the soil, which included the common finds from the trench (glass, metal, and plastic). One set of findings that stood out, however, were glass shards found inside the fire pit. These shards were different because they had cracks scattered inside the glass, something we have yet to see. We could only find glass with these kinds of breaks inside the ring of rocks, which give us even more evidence that we were working with a fire pit. The difference in the breaks exhibited inside the glass could be the result of heat damage.

In summary, Trench 2 produced a lot of finds and answered some of the questions about the former quarry site. From what we could gather using the documentary record and the finds at the site, we can hypothesize that the quarry area has become a place of delinquent fun or outdoors activities. The finds in the area mostly point to an alternative use of the site as a drinking spot for locals given the vast number of glass bottles and shards found, but we were unable to date any finds in Trench 2 beyond the year 1995 (shotgun casing). There are still mysteries that we would have liked to have found the answer to. How old is the fishing hook? Were locals having fun with a shotgun or were they hunting something? Unfortunately, these questions must be reserved for future research.