This week, once again, our class was split into three groups to complete different tasks in the field. One group began in the agricultural fields, to finish a small section that had yet to be surveyed there, one group was split into pairs who were assigned the task of doing an intensive ground survey of the 10-by-10 grid we had created on the Women’s League Cabin site, and the final group worked on clearing the site and working with the scaled diagram of the Women’s League Cabin in an attempt to determine the location of major features and discover the level of accuracy the plan offered. 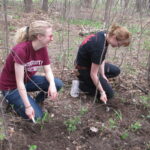 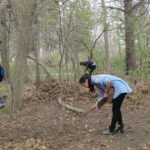 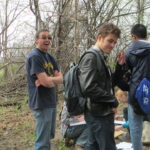 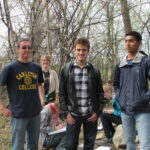 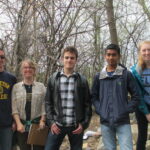 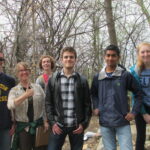 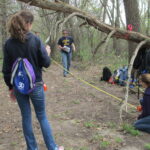 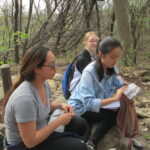 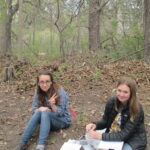 The first group finished up the last 3 remaining survey units, A09-A11, out in the fields surrounding the Women’s League Cabin site. The field had been freshly zone-tilled which is a method in which the ground is tilled only where crops had previously been grown. The effect that the tilling had on the survey finds is unclear, but the group found very few artifacts. The surveyors saw several plastic, paper and styrofoam artifacts that they did not collect, although they did collect one bag of 10 bones, which appear to be deer vertebrae from the size, shape and context.

The group that was clearing the site uncovered some of the remains of the brick patio in the back of the cabin and inadvertently began to excavate the patio slightly. This uncovering and clearing is helpful to the comparison of the plans and the site and is an important and exciting discovery.

Matching The Plans to the Site: Mapping Cabin’s Location

Figure 1: a historical photograph of the Women’s League Cabin. Note the location of the fence, flagstones, and tree

The third group then began testing the scale of 1/8th in: 1 ft marked on the diagram against the reality on the ground by measuring the width of the path between the steps and the patio. Eventually, we determined that the ratio of centimeters of the map to centimeters in the field was almost exactly 1 cm: 98 cm, which indicated that the diagram was to scale, at least in some parts. The team moved to the northernmost edge of the patio and began measurements there, quickly discovering that the number of flagstones depicted on the diagram and the number located on the site was different (the diagram shows the flagstones 12 across, 10 were found on site). The group then attempted to determine the location of the edge of the cabin by scaling up the length of the map that showed the distance between the NE side of the patio and the northern wall of the cabin. Continuing this process, the group attempted to flag the corners (and other key points, like doorways) of the cabin. While the location of the entrance as extrapolated from the diagram seemed to fit perfectly with the edge of the patio after the edges were cleared (figure 2), the corners of the cabin didn’t seem to be accurate, seeing as if they were, there would have been a rather large tree in the center of the cabin, near the location the toilets are marked as being on the diagram. As one student noted, having a tree in such a location would be “problematic.”

Figure 2: clearing dirt to locate the edges of the patio

Various theories for reconciling the difference between the diagram and the reality on the ground were proposed, mostly relying on the assumption that the cabin dimensions shown on the diagram were accurate (because they matched almost perfectly with those shown on the blueprint) but that the cabin was further south than initial measurements suggested (figure 3).

Figure 3: a comparison of the old photograph to the hypothesized location of the cabin in the present day (with a student standing in for the second tree)

Next, the group focused on measurements in the western portion of the patio and the path at the south of the patio. In the first section, the diagram appeared to be incredibly accurate except for the fact that the row of flagstones on the edge of the patio was incomplete. However, as the patio turned into the path the diagram became increasingly inaccurate. Most notably, the diagram shows only one set of steps and includes a “drive” that did not appear to correspond with anything that we found. Instead, we discovered that the flagstone path continues in the same southerly direction much further than anticipated, although we only excavated limited portions of it. Similarly, the path to the pump (and the pump itself) were much further south than the diagram appeared to indicate, but the angle of the path to the pump was roughly accurate, which allowed students to locate and excavate portions of that path as well. By the conclusion of the field day, the group had amended the diagram with rough measurements that attempted to reconcile the diagram with the reality found in the field (figure 4).

Last week the groups completed the gridding of the site and marked the corners of each 10mx10m unit square, so this week 8 people were assigned in pairs to each square. The site is divided North/South into units 1,2,3,4,5 and East/West into A,B,C,D. Because each unit square was relatively small they were surveyed completely and intensively in the grid as opposed to the transect method we had been using previously for our field survey. Simultaneously, as each pair surveyed their square, they would map it out in detail, including any features, eco-features (such as trees or rocks) or notable boundaries.

Several units, like unit D, were densely covered in leaves and had to be cleared before they could be properly surveyed. Notable features were found in several units, including large metal pieces and springs that appear to be the remains of a bed in unit D and a rusted metal barrel in unit B5 filled with pieces of glass, metal, ceramics and plastic, from what could be seen on the surface. The items in the barrel were not collected and it will instead be examined more carefully in its preserved context.

There were several high density areas for artifacts including much of unit A, which yielded many intact finds including many glass pieces and several plastic combs. The highest concentrations for unit C were in C1 and C3. C1 revealed a significant amount of charcoal remains, this raised some questions because the charcoal deposits were not near the fire pit, the chimney or the kitchen of the cabin.

In class we hypothesized about possible drop-zones for the site and tentatively suggested that the areas of A3 and A4 were drop zones for the patio and cabin area. These finds are leading to questions about the use of the cabin, the activities, how they changed over time and what we can deduce from what we have. We started thinking about the post depositional processes the site may have been subject to.

Additionally, the gallery below shows some of the many features and artifacts found this week: