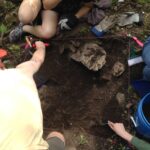 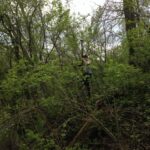 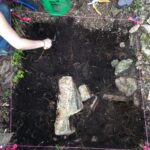 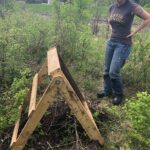 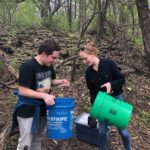 From left to right starting at the top: Trench 1, Elise conducting DGPS mapping, Trench 2 excavation, Zobeida working with the sifter, Seth and Aubrey ensuring that buckets are ready for excavation!

During this week’s lab, we split up into four groups for our last day of excavation at the Waterford Mill site.

The team assigned to Trench 2 continued their excavation. Trench 2 produced several iron nails, ceramic sherds, a piece of red glass, and an alarming number of scarlet ticks. Trench 2 dug about 4 inches deeper into the ground, and the soil context had just begun to change by the time lab wrapped up. Trench 2’s team also used the sifter to ensure that no element of material culture was lost among the excavated dirt.

The team assigned to Trench 1 did very similar work, though they were forced to be cautious as the risk of destroying the various metal and ceramic artifacts scattered throughout their area of the site was high. They discovered and catalogued several ceramic shards painted with designs, as well as nails and other metal scraps, and like Trench 2’s team, used the sifter to ensure that nothing was missed.

The third team at the site was given the task of examining the ruins of the secondary structure upriver of the main mill ruin. This team worked to clear away the brush covering the site, and also performed a limited artifact survey of the area, collecting and cataloguing several metal scraps and, notably, a shoe which appears to have originated near the time the Waterford Mill would have been in operation. This team also determined that the building may have been larger and more complex than photographic evidence indicated, since its river-facing wall extended for some distance to the southwest.

The final group was given the task of DGPS mapping the site, taking points throughout the mill site to fill out our virtual map of the area. Among these points, several were taken at the secondary building in order to add its location, elevation, etc. to the site, requiring a harrowing trek through the brambles to reach its farthest extent.