During lab in the fourth week of ARCN 246, the Tuesday section arrived at the Waterford Mill site and began to clear the area, put down some grids, and do some mapping.  We had had an introduction to much of this process in class, talking about what we would do when we arrived and what we could expect out of the process. Getting an idea of how these processes work in the field and how we should start to go about them was really helpful, and prepared us to take it on once we reached our own site.

Once at the site, we divided up into three rough teams: clearing, gridding, and mapping.  Each team were assigned specific instructions and began to work to complete their side of the day’s work.  The mapping team were in-charge of site documentation and collecting coordinates points, which they did using a GPS device and recording different coordinate points, or by filling out feature forms and sketching different features.  They worked in teams of 1-2 and moved around different areas of the site. Some mapped the main area and the walls that extended into the mud and river. Others went further to the northeast and found a midden and fire pit, exploring an area not easily seen from the main site.  The last group went in the opposite direction past the main site and found a midden with lots of interesting artifacts already visible.

Julianne, Alex, and Brendan look at a feature form while Elise takes coordinates in the back

The gridding team marked the sites and took bearings.  The four of them worked together to make sure the lines stayed on course, work the tape measure through the brambles or hand it up walls, and mark every five meters with a flag.  They began with an x-axis of 20 meters running along the lower wall at a bearing of 70° northeast, and staking down flags every 5 meters along this length as well. They also began to create y-axis grid lines, which extended 15 meters at each 5 meter point on the x-axis at a bearing of 340° northwest.  They also staked flags every 5 meters along the y-axis lines, and completed three full lines during their time. This will provide a guideline for future survey and documentation work, and was completed by the Wednesday group, although the grid will probably be extended even further to either side.

Extending the tape measure through the brambles and trees to create the grid.

The clearing crew worked primarily in the main walled area near the trail, hauling out logs, bushes, and general natural debris that was preventing easy access to the site.  While this was treacherous at times, and no easy work, the team managed to clear a large portion of the site during the time we were there. They also often got the first look at any artifacts on the surface and at the different features and walls present in the area. 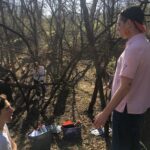 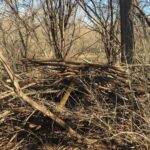 Ilan and Matthew discuss the best way to clear the area, and the pile of slash collected by the end of the day (photos courtesy of Aubrey)

The feature forms ended up giving us a rough idea of the different large features in the area. Various walls, middens, and smaller artifacts were recorded that give us a preliminary look at what we will find in the area and the different sites of interest.  The artifacts looked to range in age from this year to possibly several decades old, although it is hard to tell without close examination. Some examples of artifacts found include glass bottles, metal buckets, pottery, and keys. There was also a fire pit found, so there may be some interesting artifacts in the area as it would have been used fairly often.

Overall, it was a very productive day, and with the work that the Wednesday group did, we should be in pretty good shape to move on to more surveying and excavation next week.  We got a chance to really put what we’ve talked about in class into practice, and it was a really interesting look at where we will be working for the next few weeks. Getting to do some practical application and explore some different facets of archaeology was interesting for all of us, and gave us some things to think about as we plan our next steps.

The site was divided into a coordinate plane with x and y axis. The lower and upper wall represent the site of the mill and the current ruins of the wall. The other yellow quadrants around the walls are sites that was designated for other groups to survey.