This week’s Archaeology lab centered on Community Archaeology Day, led by students focusing on outreach for their final project. The outreach group invited members of the Carleton and greater Northfield communities to visit the site of our fieldwork and our classroom to learn more about our study of Pine Hill Village.

Each group took time to speak with community members about their respective projects, with visitors as diverse as Northfield locals to Carleton faculty and staff, including Dean of the College Beverly Nagel. Some of the Community Archaeology Day visitors made the trek to the Pine Hill Village site despite rainy weather, others remained in the classroom. 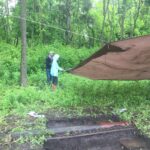 Natalie Sainz and Professor Knodell pitching a tarp in front of Trench 1 in preparation for Community Archaeology Day. 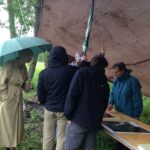 Visitors at the field station, including Dean of the College Beverly Nagel (left) and Arb Director Nancy Braker (right).

In the field––or, right behind Goodhue Hall––several students set up a station next to the class’s primary excavation trench. Students shared their excavation experiences and findings with Community Archaeology Day visitors, highlighting each of the trenches, and other sites of interest. Professor Alex Knodell helped several students put up a tarp to shield the Pine Hill Village site from the rain, under which they displayed on a table several photos from the site, including the building plan and historical aerial photographs. Students also removed protective tarps from the other trenches, which they also showed the visitors. 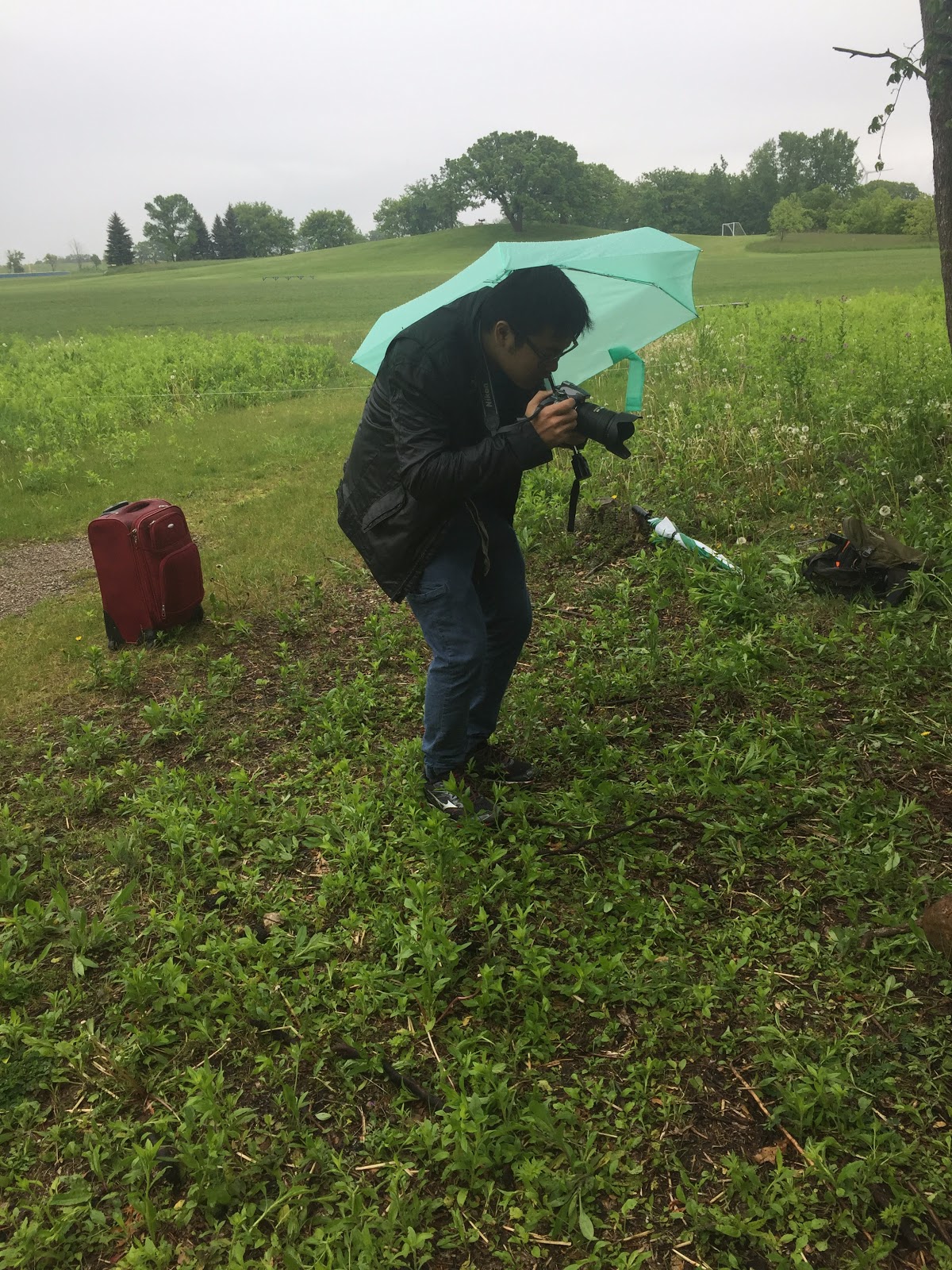 Those outside were joined by the only two students doing field work, Joey Castaneda and Eric Biddulph-West, who were working on their final project. Joey and Eric are making models of the site using a modern photo stitching technique called Photogrammetry. They took multiple photos of each of the trenches which will be uploaded and collated through a computer program to create interactive 3D models of the trenches to share with the general public, and despite the rain and cold could not be deterred.

Nevertheless, much of the Community Archaeology Day activity took place indoors due to the rainy weather. Students indoors worked in several groups split by research interest, including an oral history group and two artifact analysis groups. Of the two artifact analysis groups, one focused on cataloguing, inspecting, and interpreting artifacts, while the other worked with ArcGIS software to map the findings. 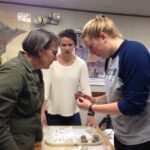 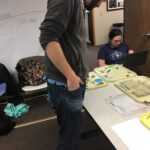 Visiting Assistant Professor of History Austin Mason looking at excavated artifacts from the three trenches on the site of Pine Hill Village at Community Archaeology Day.

While each respective group had previously submitted projections of what their final projects would feasibly look like, as well as the work entailed, the work conducted in class allowed groups to develop a better sense of what could actually be accomplished within the allotted timeframe. Professor Knodell fortunately devoted the entirety of class time on Thursday to final project work and checked in to see where we were and how he could be of help.

Spotlight on Oral History Group: This particular group initially sought to conduct between 10-12 interviews with alumni who lived in Pine Hill Village during their time at the College. After reaching out to potential interviewees via email and phone call, however, and receiving no response, the group decided to modify their project by favoring more in-depth interviews with a handful of Carleton people who had some connection to the Pine Hill Village era, whether they attended the College at the time of its existence or were descendants of its residents. In addition, the oral historians published on the class website rough drafts of content that they plan to polish and submit for their final project. 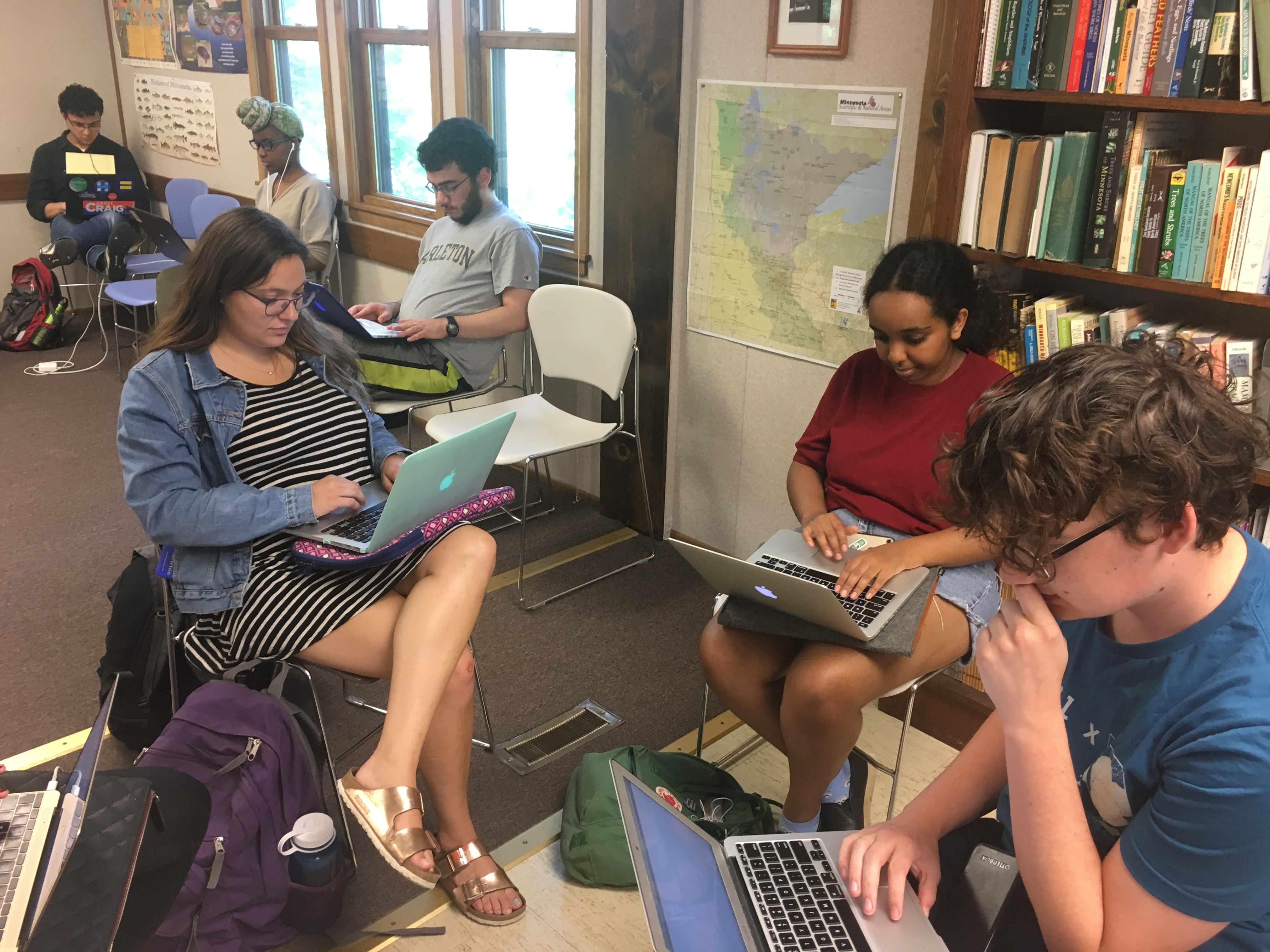 As we head into the final week of the term, it is interesting to witness the diverse, interdisciplinary methods that our class is using to blend the physical aspects of our work this term with the humanistic aspect of archaeology: the formulation of narratives behind excavated artifacts. It is looking like our final projects will be thought-provoking, relatable to community members on and off campus, and above all, accessible. Recent class discussions and assigned readings have focused on the importance of making archaeological fieldwork understandable to those outside academia. In the end, we will have succeeded if our audience understands our signs, maps, models, artifact analyses, interviews, and historiography.