This week, we continued fieldwork on the Pine Hill Village site. The class was separated into groups that were focused on: excavation of trenches, shovel test pits, mapping, and survey check. Before class, we assigned people to the various tasks.

We had three groups doing excavation this week. Trench 1 and 2 continued at the fire hydrant and rubble pile.

Trench 3 was added at the site of a shovel test pit from last week. Students discovered concrete when they were digging. This feature was the focus of Trench 3. The group at Trench 3 created a 1×1 meter grid and began by clearing vegetation and sifting dirt. After realizing there was still a lot of plants and roots, the group focused on expanding the trench downward as much as possible and then began sifting more. They found asphalt, glass, a rusted nail, a piece of chalk, and a yellow marble. The group also exposed the feature, which they concluded was a concrete post hole. At the end of the day, the group had dug about 1.5 feet down.

At Trench 1, the group continued deepened the trench by several inches. The group found pieces of thick glass and an old-fashioned bottle opener, as well as glass shards which seem to be from alcohol containers. They uncovered an additional flagstone in the northeast corner of the trench and exposed the previous ones more. The group reached a depth of 7 inches. Group members seem excited about the findings and are looking forward to more carefully analyzing the many artifacts that they have found over the past few weeks.

At Trench 2, the group focused on the southern side of the trench, which included the rubble pile. The group was able to deepen the trench by several inches. They uncovered additional pieces of pottery and wire, asphalt and concrete, and glass shards. Near the end of the day the soil began to have lighter, clay-like sections. This most likely a new context, which was uncovered in the shovel test pits. Some group members focused on digging in the trench, while others focused on sifting dirt. The group dug about 6 inches deep, by the end of the day. 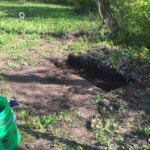 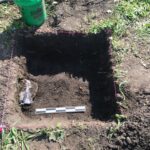 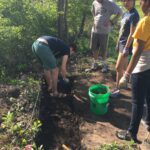 Excavation in action at Trench 2 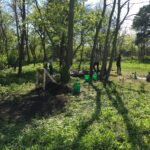 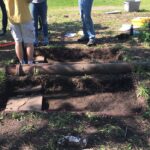 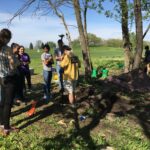 There were 8 new shovel test pits inside the survey grid this week. Groups dug holes about the length of a shovel and about a foot wide.The STPs were in the middle of the survey units to see if there was anything else to be discovered, besides just in the three excavation sites. Some groups found concrete, brick, and building material. In shovel test pit #9, a large chunk of concrete was found within the hole, but the group was unable to uncover the rest of it. It was pretty wide and tall and could potentially be from foundation of the Pine Hill Village or from spillover of concrete during that time when construction was taking place. There were also old rusty nails, glass, and ceramic found in the same STP. This would be a good place to start another full excavation site, but due to time constraints of the class, a STP will have to do for now. Pieces of concrete and brick were also found in shovel test pit #11. The piece of brick had text on it that the group wants to hopefully decipher during the next lab. It is highly possibly that all of these artifacts could be from Pine Hill Village since they were found a few inches deep into the STP. Groups are looking forward to further examining these materials to discover more information about the site. The STPs seemed to be very successful since many groups were able to find interesting artifacts that could lead to greater insight about Pine Hill Village. 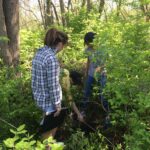 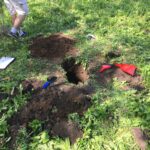 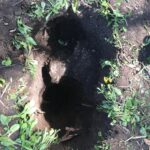 Inside a shovel test pit 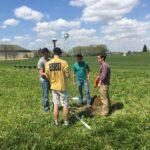 Students working on a test pit 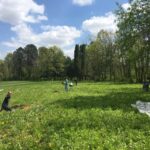 Most of the survey grid had already been mapped so there was not as much to map this week. The mapping group, which consisted of 3 students, mapped the points of the many shovel test pits and trench 1 on the GIS computer. Students learned how to handle and use the GIS to get points that were within centimeters of accuracy. They placed the GIS computer in four sides of each STP to get those points and then placed the mapping system inside the hole to plot that point. This was also to map the length of the hole and the high-tech GIS made all of the points very accurate. This group also mapped the area of trench 1, consisting of its 2 contexts and the cobblestone path found within the site.

Below is a photo detailing where new shovel test pits are, as well as the new excavation site at Trench 3 and the continued excavation at Trench 1. No new points were taken at Trench 2.