Img 1. Look at those branches!

“Under the Scorching Sun” – Maanya

Though we tried to get drone data, due to restrictions around telephone lines and railroad tracks and general tree cover it wasn’t possible. Hopefully in coming weeks we can obtain drone footage.

Img 2. DGPS points from the Waterford Mill site on May 14 and 15

Img 3. Clarissa and Loren mapping with the DGPS

Pictured below are some of the findings from trench 2, which are explained in the trench 2 section. 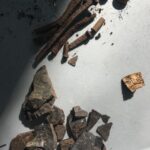 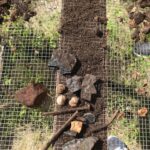 Img 5. Dirt from trench two being sifted to find its artifacts

Annie, Aaron, Clara, Hank, Emily and Sam excavated in Context 3. This was the first time excavating for all of us (Aaron was our mentor as he was an experienced trowler from his previous work in Israel and Jordan with Barbara). As Sam mentions in his fieldnotes, previous groups had mislabeled contexts which made it confusing to identify the context Wednesday’s lab was working in.

After establishing context 3, they began excavating working as flat as possible to evenly excavate the site. This was challenging, as it was tempting to dig in areas where there were clearly artifacts protruding. Additionally, as Clara mentions, there were possibly too many cooks in the very dirty kitchen which made communication very important–making sure that everyone was still troweling and clearing at about the same level. Each excavator used a trowel and dust tray–holding the trowel at 90 degrees in order to disturb the stratigraphic layers as little as possible–and swept thin layers of dirt into the pan. Dirt was emptied into large buckets. This process was time-intensive and exhaustive, but rewarding. A few ticks were found crawling, which caused for a minor panic, but they continued work. After buckets were filled, each bucket was brought to the sifter so that hidden artifacts could be uncovered.

As excavation was happening, Annie and Emily took turns drawing a sketch of the various artifacts and rocks as they were being uncovered on the Excavation form.

For bucket one, Sam poured the contents of the bucket onto the sifter as Hank moved the sifting device back and forth; this process surfaced items such as nails and bullet casings, letting the rest of the dirt fall to the ground. This process uncovered charcoal, nails, plastic, bone marrow, shells, and a .22 bullet casing. 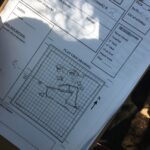 Img 7. Excavation form from trench 2, as filled out by Annie 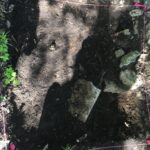 Arya, Maanya, Miyuki, Price, and Sam worked to excavate trench 1, specifically context 4. This group had a similar process to that of those working in trench 2, and followed the same excavation techniques. This group, however, was working much deeper than that of trench 2. As Maanya discusses in her fieldnotes, they conducted trail trenching–digging the site solely for its archaeological findings and potential.

Following the sifting process, this group separated findings by material, bagged findings, and labeled the bags appropriately. Some interesting finds from this group included metallic springs, a (potentially) glass coaster, some pottery pieces, and a few nails.

The abundance of charcoal found could be indicative of the mill’s original time in use. In our research about mills, we have learned that they catch fire quite often because the powder released during the milling process is extremely flammable. One local mill that burned down multiple times as a result of this is the Archibald Mill – we hypothesize that the same thing could have occurred here. One further question we could pursue to seek out an answer to whether or not this is the cause of the charcoal would to be to do some sort of analysis on the walls that remain in the mill to see if they have remnants of ash on them. Another possibility is that the charcoal is not the result of a mill fire, but rather from site usage after the end of the mill’s functioning.

Additionally, we found many nails (pictured above), which were greatly rusted. Perhaps these came from the mill’s construction or mechanisms which existed within it. Furthermore, many of the nails are bent or broken, indicating that they were used for something heavy or as support. It is difficult to tell without further analysis, but given the layer at which they are buried and the damage they underwent, we are hopeful that they prove to be from the time of the mill’s use. One potential next step might be to analyze the different nails used and the construction practices of the time. We could compare this research to the nails we found to get a better idea of whether our nails come from the mill’s initial occupation or not.

As far as more contemporary occupation, we found a .22 casing, which is potentially from a more recent time than the mill’s use. With more research regarding the hunting and firearm practices throughout the last couple centuries, we may be able to figure out approximately when the bullet was fired. Depending upon the time at which the bullet was fired, it could raise a few different questions. If it is from the time of the mill’s use, then we should search the Waterford records to see if there was any news of something being fired, intentionally or unintentionally, at the mill. Alternatively, if it is more contemporary we could try to find more bullets or casings to see if we can piece together a pattern of why/when they were fired.