In this week’s lab, we worked on cleaning, sorting and analyzing all of the artifacts which we have collected over the term. The artifacts came from the whole term, from the surveys of the fields, the quarry trench excavations, and the Mill Pond Dyke excavation. There were a variety of things ranging from glass to wrappers, beer cans, bullet casings, and bones. We worked one bag at a time. We cleaned the artifacts with water and a toothbrush and then sorted them into lots based on similarity. For example, some of my lots were determined on the similarity of the glass shards; some appeared to come from the same bottle and some were just the same color. After cleaning and sorting, I then examined the artifacts for any attributes which could aid in the dating of the bottles. For example the markings on the bases of glass bottles have imprints and logos which can be researched for more specific dating. We spent a decent amount of the lab just researching, and we used many different sources and websites for reference.

I was able to date some of the glass as far back as 1953. I had a coke bottle which I was able to find the earliest possible date being 1957 due to the design and font of the Coca-Cola logo compared to those used over the years. I was able to identify some bottles due to their logo markings on the bottom of the bottles. We had glass from Owen Illinois Glass Company, Brockway Glass Company, and Lincoln Container Corporation. We were then able to identify the earliest they could have been manufactured based on the embossings. This process was actually quite interesting because it required a lot of digging, literally, and searching in order to discover and assign chronological information to the artifacts.

This week’s lab was once again a continuation of the ongoing excavations at our potential Quarry location in the arboretum.Continuing from previous weeks we were uncovering a rock formation which did not seem to be natural. And the goal of the day for Quarry Trench 1, was to finish up the process by finally reaching bedrock. Which we were able to finally accomplish by the end of the lab day.

We continued the usual routine which we have gotten pretty accustomed to by now. We grabbed our brushes, trowels, and dust pans and got to work. We cleared away dirt and sifted through it with a sieve, dumping it about 1 meter away from the trench due North. Unfortunately no new artifacts were found today. However, by concluding our work on the pit we have a decent basis for our hypothesis that this location served as a quarry at some point in time.

With Alex’s input, we hypothesized that the patterned stone, which was initially visible even before excavations, is a natural formation. The patterns, which we initially thought to be indicative of cutting from quarrying activity, are most likely natural deterioration due to the soft and crumbly nature of the stone. This aspect of the stone is probably what made it so appealing for quarrying. Comparing this stone to that which we hit at bedrock, we can hopefully draw even more conclusions on the quarrying process in general.

Today’s lab I continued on the excavation of Quarry Trench 1. It was not much different from the previous week for me. We got all of our tools out, the trowels, the brushes and the dust pans, and we got to work. We revealed a lot more of the roots which ran through our trench and we were also able to reveal all of the stone bed in the upper corner. The ultimate goal is to hit bedrock throughout the entire trench, so we do have quite a bit of work to do still. But we made great progress and actually found some interesting artifacts today. We used the sieve to sift through our removed dirt, and found another small shard of glass and a very small bone! So today’s lab feels like quite a success because we finally found something other than glass!

Today’s lab was a continuation of the process begun during lab of week4. The objectives of the lab were to finally survey our most heavily populated grid square, to widen our survey area and survey other Lidar anomalies, and to begin excavations! We split up into groups, according to which tasks we wanted to complete. I was in the group who began excavating.

Emmy was really drawn to a specific spot which included a strange rock formation. So the goal of our excavation, at the specific location, was to find out whether the rock formation is a natural one or a man made. We began our excavation process by measuring out a 2×1 rectangle. That was an interesting process; we had to use a mallet to drive the stakes into the ground, and then find the exact parallel by some measuring trick. We  then roped it off and got to work. We first cleared the area of small roots, twigs, branches, leaves, and other brush. We then began clearing away our first level of dirt, using trowels and brushes. We did not get very far into the process, but we were able to clear at least a top layer away. We sifted the dirt which we removed through our clearing process, and found one shard of glass.

When it came to interesting finds this lab, there was not much from our excavation. However, we made decent progress, and exposed a lot of the rock formation. I thought that this lab and the excavation process was very fun. It felt like very legitimate archaeological work, because it was. And it is exciting to know that we could possibly reveal new information about the history of this location, by simply removing a couple of layers of dirt.

This week we deliberated for several minutes about where we should direct our archaeological pursuits. And finally we as a class, decided to take a journey to a site within the arb which was possibly a quarry. This was the Tuesday Lab’s first time visiting the location, but it definitely seemed more enticing than revisiting the field from the previous week. At the site, there was a promising trash pit, full of glass shards, and different types of beer cans. We set a base point right near this trash pit. We sent a team out to do some preliminary scouting, sketching and topography, and we began measuring out our grid. From our base point, we measured off the perpendicular and parallels, and measured out 5 by 5 grid squares.

My partner Josh and I started on one of the grids closest to the base point(K10 or 11..). We took preliminary pictures and sketched out a map of where things seemed to be naturally, before disturbance, in our grid square. Then we did some surveying, grabbing all of the obvious material, and moving brush and branches in order to find slightly buried artifacts. We found around 5 rusted pieces of beer cans, counted as metal, and around 6 shards of glass, which we documented when filling out our survey unit form. We have not done much speculating about the significance of these findings, the trash pit, or the site of the supposed quarry. However, it was another great hands on experience with archaeological concepts and field work.

The Goal of Week 3’s Lab was to introduce ground surveying, and the techniques which it employs. It was definitely an interesting experience. We had an option of two different fields, one being recently plowed, making surveying lines a bit easier, but finds a bit more scarce. The other field being unplowed, with very tall grass, making surveying lines a bit more difficult to maintain. However, Alex assured the class that there would be plenty to find, so we enthusiastically set our sights on the latter, with hopes of coming across some pretty neat finds. Our area of survey was a very large field, approximately 90 by 300 meters, perpendicular to Spring Creek Road. From the get-go there were obstacles which we had to overcome, one major challenge being the weather. I personally was not prepared for the snow and very cold weather, at all. I believe my preconceived notions of transective ground surveying were slightly off; I thought it would be a bit more similar to the intensive hike we did in week 2. I was incorrect, and I dressed inadequately; still, I believe that I learned an important lesson. As an archaeologist, it is important to be prepared for tough work and weather conditions! Truthfully, our findings did seem a little meager and insignificant compared to my grand preconceptions and ideas of archaeology as a field and the discoveries which it brings about. But apparently there was a farm house located in the A01 unit, where most of our discoveries were made, and I found this to be extremely interesting. There is something so meta about small, seemingly insignificant pieces of trash representing lives, stories, and insights into the past; a past which is no longer perceptible due to renovations, deconstruction, and other changes over time. This lab, although painfully cold, provided me with new and useful archaeology methods and tactics, as well as a new sense of the appeal of modern, small scale, archaeological pursuits.

Picture of Me freezing while managing group A, and filling out the survey form. 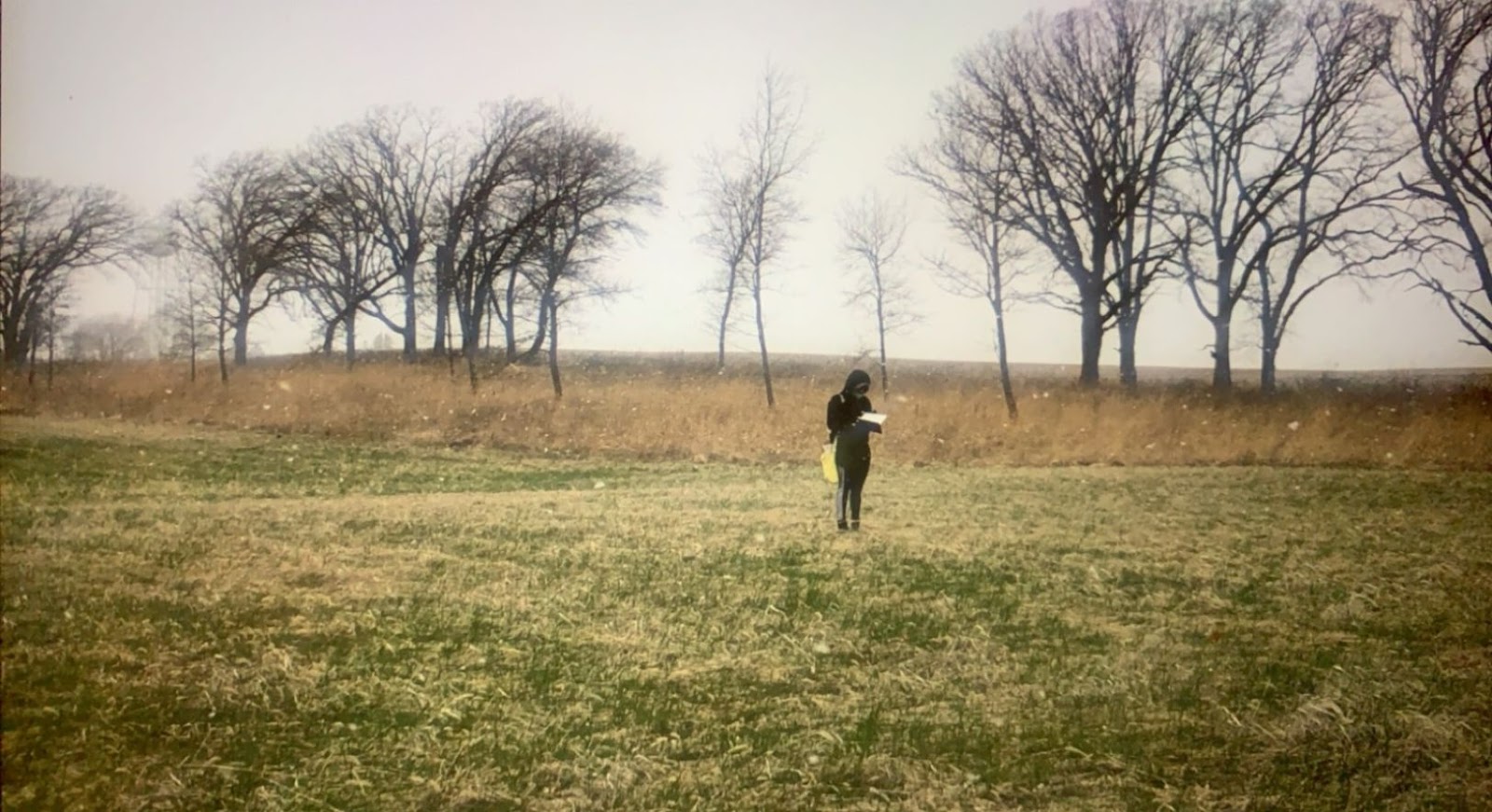 Picture of Survey Group A freezing while beginning survey of unit A01.

For today’s lab, MJ led us on a tour of the arb. It was quite enjoyable despite the heat. We viewed all of the legendary sites mentioned in class. We saw the location of the Waterford Mill, the Women’s League Cabin, and the Pine Hill Village. I was honestly surprised that there was nothing there. I think that I was expecting to see old abandoned buildings and fragments of concrete and walls. However, all there we saw was a concrete block at the Waterford Mill and a post at the Women’s League Cabin. It’s so interesting that there are these places with such significant histories, and all that is left of them are a couple of blocks of concrete. I can see the importance of contemporary archaeology, in that these histories aren’t that far removed from us.