I spent the lab period researching staplers and talking with the Dakota County Historical Society. Although I wasn’t able to identify the staple in tangible way, I confirmed that it probably is from industrial use due to the wire gauge. It is also on the smaller side, pointing to use with canvas, potentially in holding together sand bags. Sand was found mixed into a context at the dike. The Dakota County Historical Society proved useful once on the phone. Although I’m awaiting an email with the scanned information, she was able to confirm our previous findings that the Dike was constructed alongside the Griss Mill, in the 1870’s. The Archivist said she didn’t know if she had any more information about the Dike, although she also confirmed that it was probably built without municipal permit, meaning that the documentary record may not exist at all. Dikes, dams, and like structures are sanctioned by municipal governments in the State of Minnesota, although it’s unclear when that practice began.

Today we analyzed artifacts to try and establish a timeline of the quarry site. Much to my surprise and the group’s satisfaction, we were able to date most of the artifacts to the 1960’s. Many of the cans were from breweries in the midwest, and some of the bottles could even be put back together, or ‘joined.’ I personally traced the bottom of a bottle to 1963-1967 from a specific brand, which was quite satisfying. I was also able to identify the dates of a series of bottle caps because of their brand logo, which read “Grain Belt.” That specific version of their logo was only printed in the 60’s and 70’s, thus continuing to fit the timeline. A group of us tried quite hard to determine the time of origin of a ready made maple glazed ham container. We determined it was also from the middle of the century. I personally was amazed by the amount of work and detail that other archivists, ephemera collectors, historians (both amateur and professional), and just interested people had put into digital records of company brands and bottles. It certainly made our work easier.

Week 7: Last Chance Excavations: the Birth of the Bullet

This was our final day of excavation and field work, so we hit the ground running! I did GIS surveying the MJ. We retook points on the corners of each trench. We also measured the width of the dike at various points, taking roughly four points on each side, and two points on each end of the dike like so:

The ground excavating the dike found a bullet! This was very exciting. We did some preliminary research on site based on the engraving on the bottom of the bullet which confirmed something that further confused our timeline: the bullet had to be manufactured after 1912 (ish) because it was a product of a company that existed after a merge that took place around that time. The dike, to our knowledge, was created in the late 19th century. The bullet was found several feet into the excavation, thus contradicting the timeline. 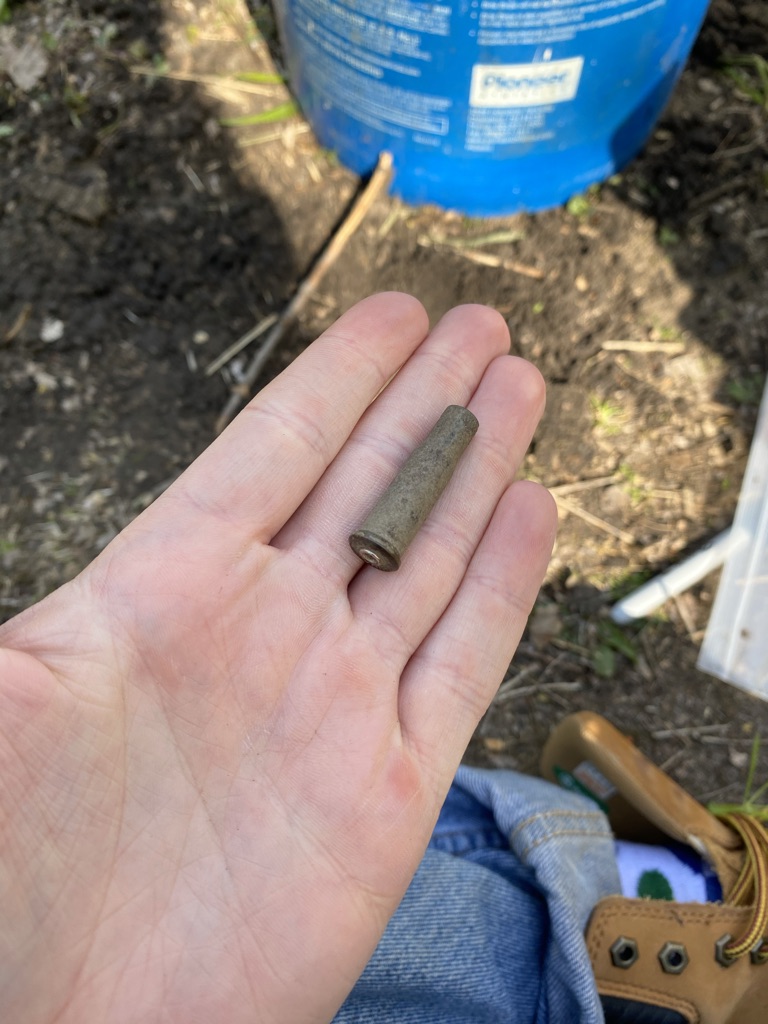 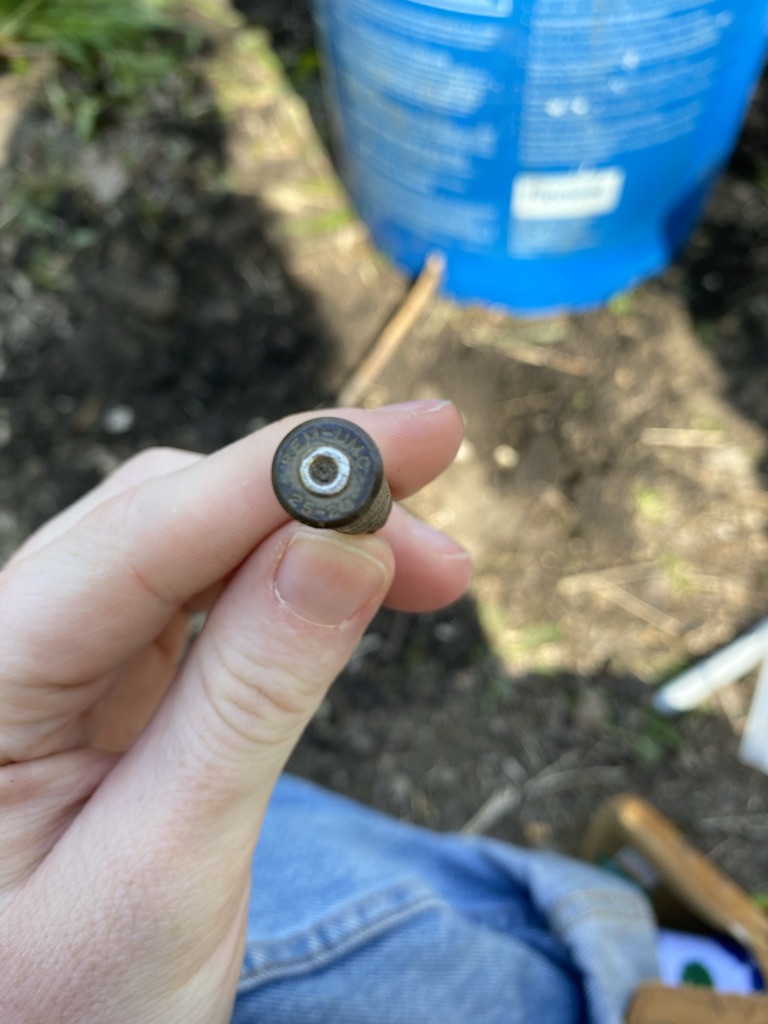 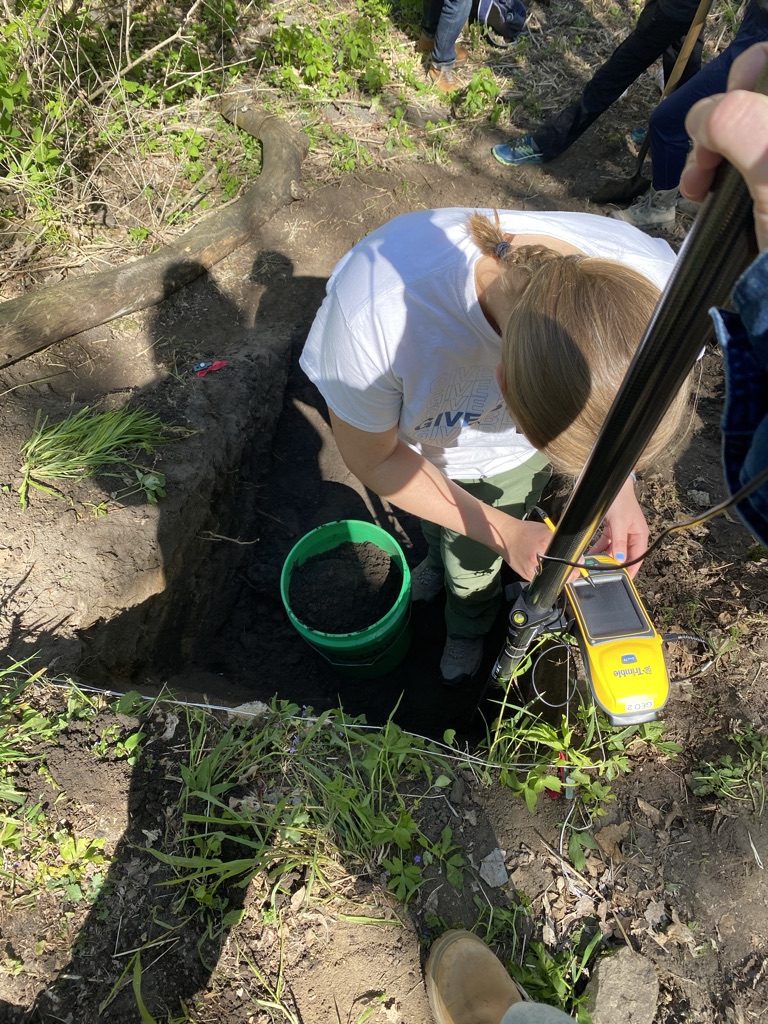 MJ on the GIS

Today in lab, we returned to the quarry. It’s a nice walk, really. We finally had good weather! I worked with a group responsible for DGPS-ing the survey units, along with completing another section of laying out survey boundaries and ground collection. It was not a very easy task. Once again we were met with a very overgrown environment that also encompassed a cliffside, which our group traversed to complete laying out the units. The surface collection yielded little of interest; there were a few pieces of glass and metal, but nothing explained new behavior on the site. There also seemed to be a decreasing spread as we got further from the L10 corner square.

My highlight was working with MJ on the DGPS. I found it fairly intuitive, and rather satisfying to complete. It seems like a fairly effective way to measure sites, survey units, etc. and mark them all for future map making.

The other highlight was being outside and enjoying the weather! That’s always a plus when it’s nice. The bugs could have stayed home, though 🙁 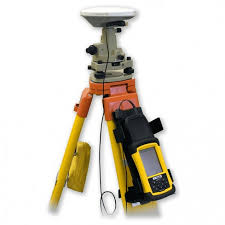 example of a DGPS not dissimilar to our set up 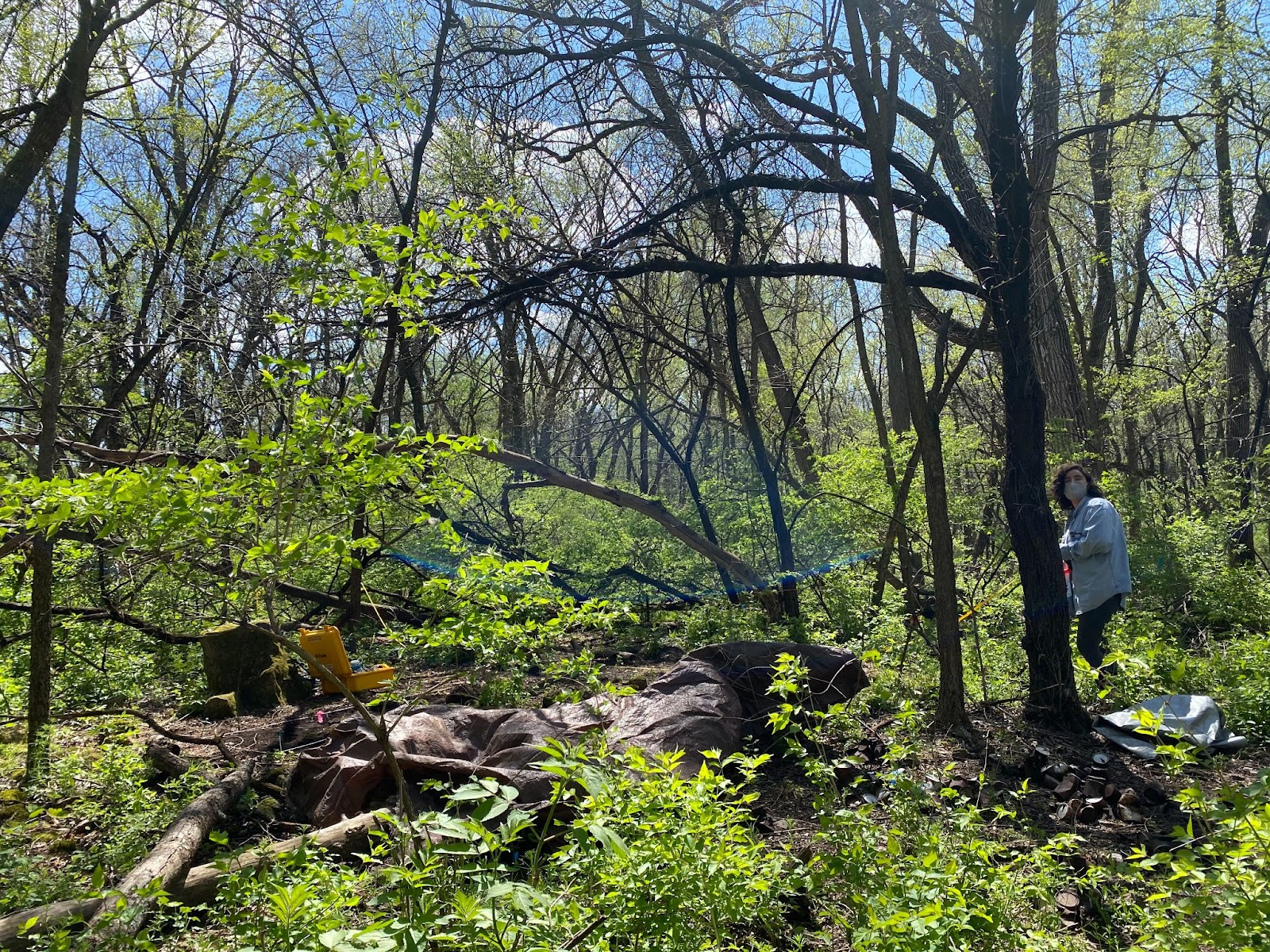 Hannah with the survey unit measuring

Although this week I was unfortunately not with the group, I did review the activities of the lab with other accounts. During the lab, our class headed back to the quarry site, this time with gear, to begin our excavation and more formal surveying. The class split into three groups: exploration, excavation, and trash dump survey. Exploration mapped and confirmed the surroundings, excavation began to carefully excavate starting at the L10 point, which represented the corner of the survey grid. They found mostly glass and metal cans and bottles, which lead to the preliminary guess of this having been a party site for past students. We classified the site as a trash dump. They also as a class discussed the possibility and potential obstacles to excavating the nearby Mill Pond Dike, which would be a different form of excavation that we are less familiar with. We also had to consider how to do this in a minimally destructive way as the Dike is a current path in the Arb, and is obviously a part of the local natural habitation. 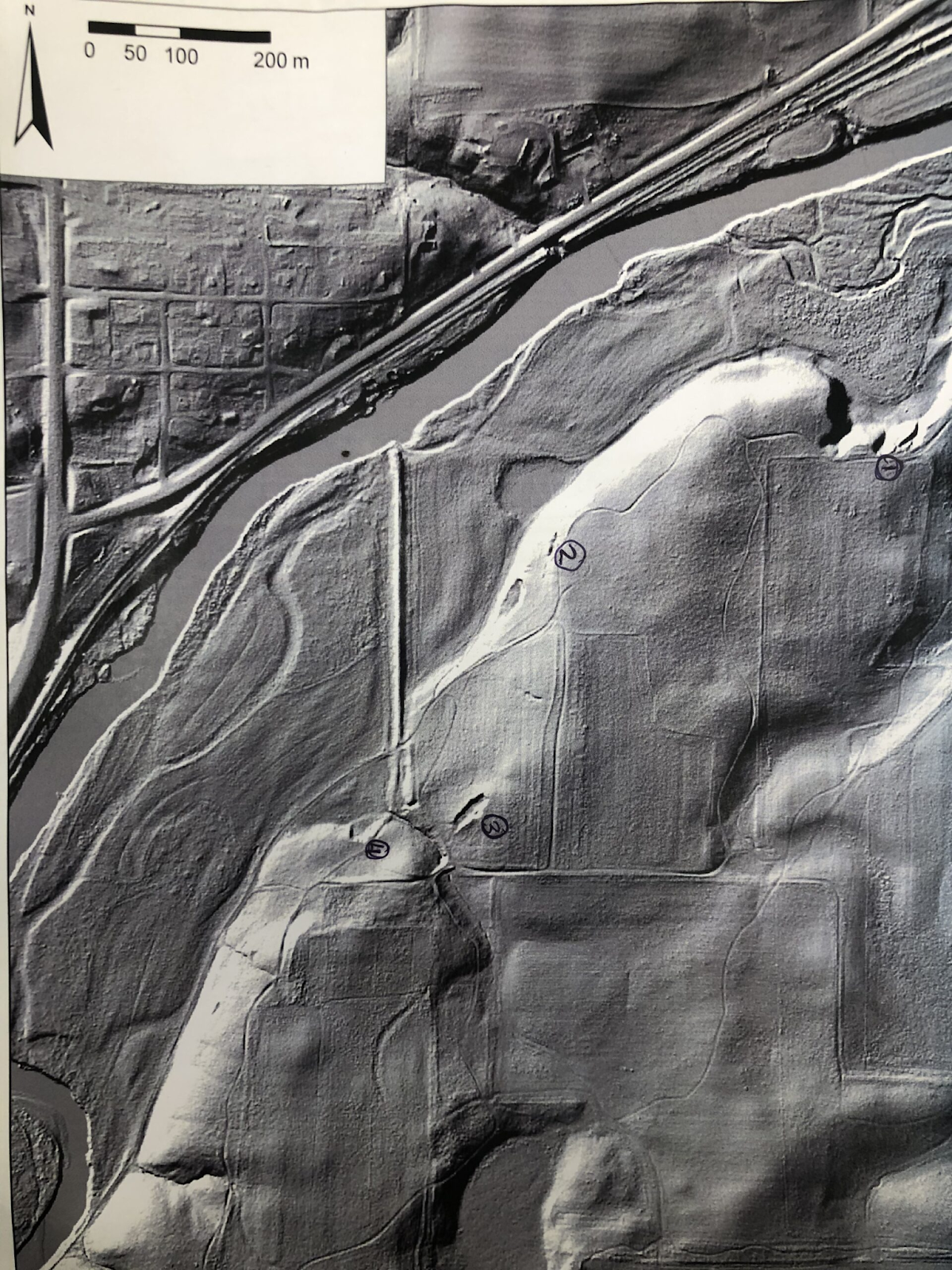 The LIDAR data of the Dike

Today’s lab began with a discussion about sites and the research questions that drive surveys. After some discussion, we agreed as a class that although perhaps going back to the farmhouse location could yield some details, there probably wasn’t more to be found there. We opted instead to trek further into the arb to find the so-called “quarry” site that the Wednesday lab group had been able to tour but we had not. Although our discussion of these things cut into our actual survey time, we were still able to map and create a grid of the parts of the sites we are focusing on.

Upon completion of the preliminary survey, we found a lot of beer cans from different eras, and a lot of broken glass. One larger cut rock points to the possibility of a structure having stood there in the past. I, however, was not on the hunt for artifacts; I was busy trying to map the general topography of the area somewhat to scale. We determined that the layer with all the beer cans and the campsite-like location is probably the result of digging down into the riverbank side to create this plateau medium layer. There’s a lot of jagged rock that clearly demonstrates human interaction with it, probably to quarry. It was a large endeavor, though, and we suspect the use of dynamite. I found mapping to be interesting, and fitting the map to the scale of the grid was a satisfying moment. I look forward to analyzing the finds of the site!

Week 3
Transecting in a Winter Wonderland: Ground Surveying Techniques in the Arb

This week we took to a formerly plowed agricultural field to practice ground surveying. We split into two teams that each had three units of the field, as diagrammed below. This allowed precision in recording the location of finds throughout the process. Overall, it was interesting to get a feel for the various techniques used in the survey. We all determined how many natural strides it takes us each to walk ten meters to ensure as close to accurate measurements throughout the process as possible. We used field tape to mark the corners of units to maintain an overall perspective on the survey. We broke the field into segments to prevent too much wandering walking that makes the transects harder to keep track of on the grid.

Although it was cold and snowing and windy and altogether not the greatest of conditions, we did manage to have some finds! Most if not all were concentrated in the A01 region and surrounding areas which makes sense given the prior information that there was once a farmhouse or structure near there. Thus, the high density of tile and brick in that area is very logical. There wasn’t much else in the whole rest of the field, which points to either a lot of soil movement over time or a very efficient clean up job from the house demolition. There wasn’t much trash in the field either, which, perhaps this is just because I’m from a city, was very reassuring as I was somehow expecting more litter and recent trash than anything else. 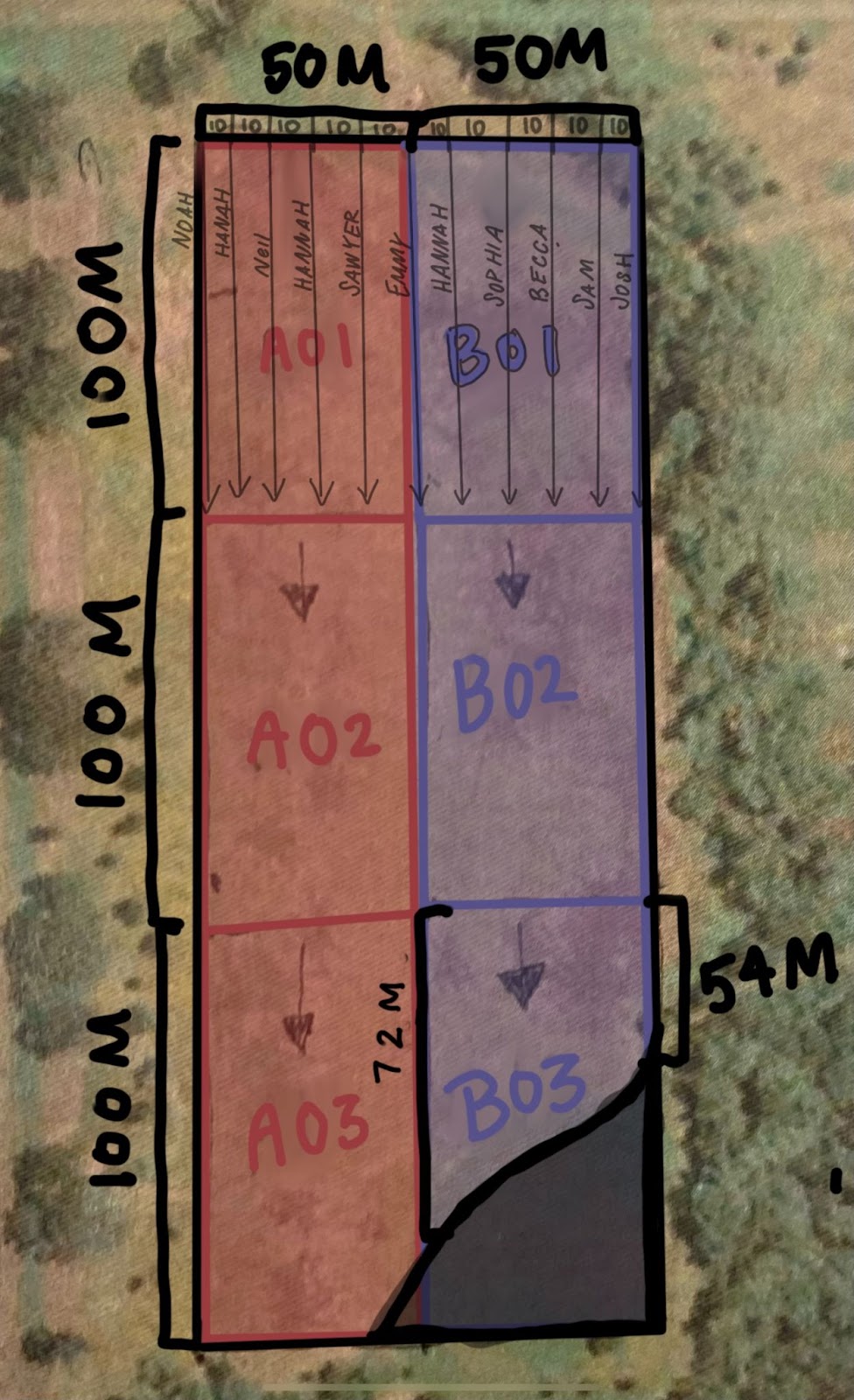 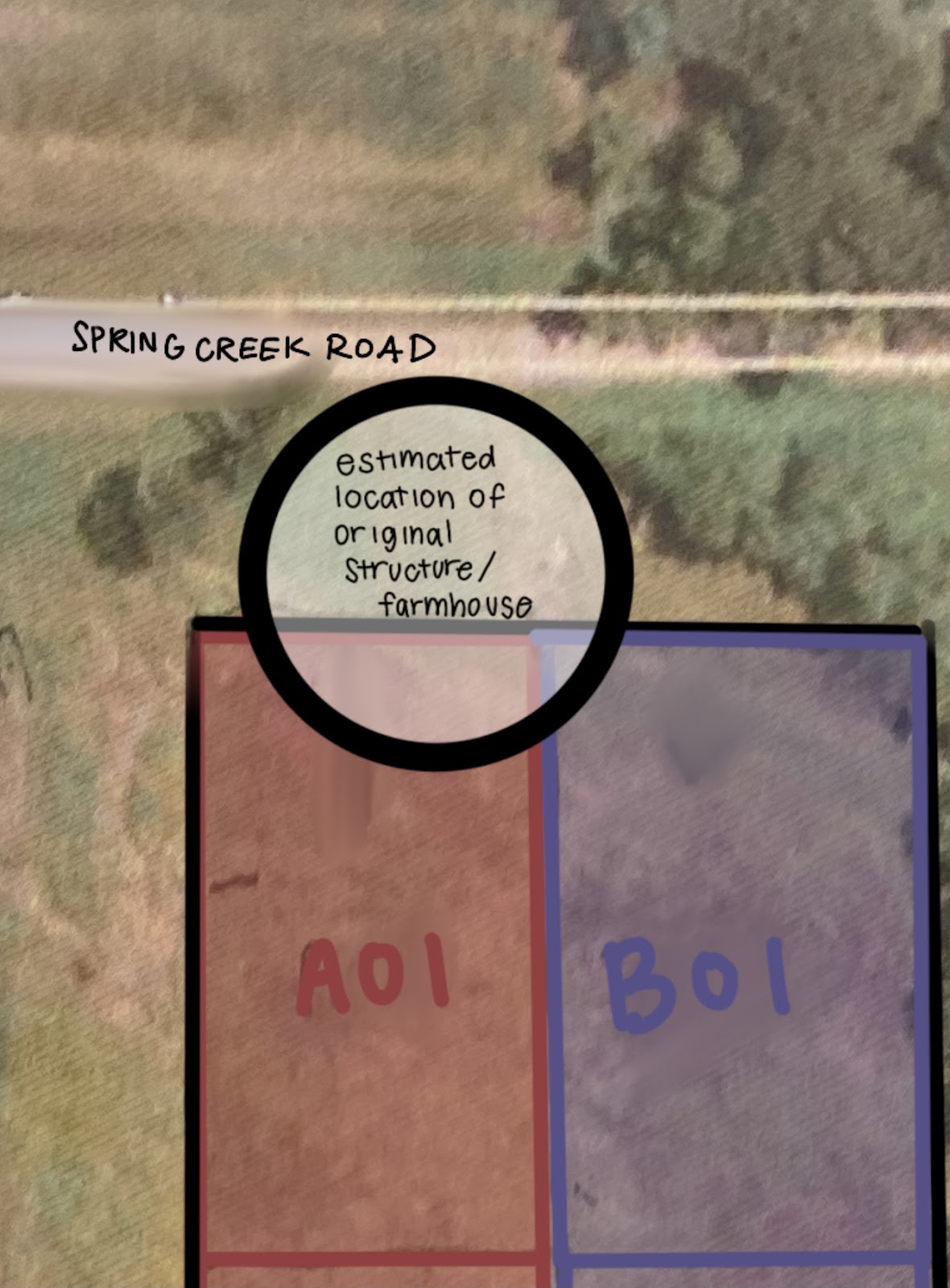 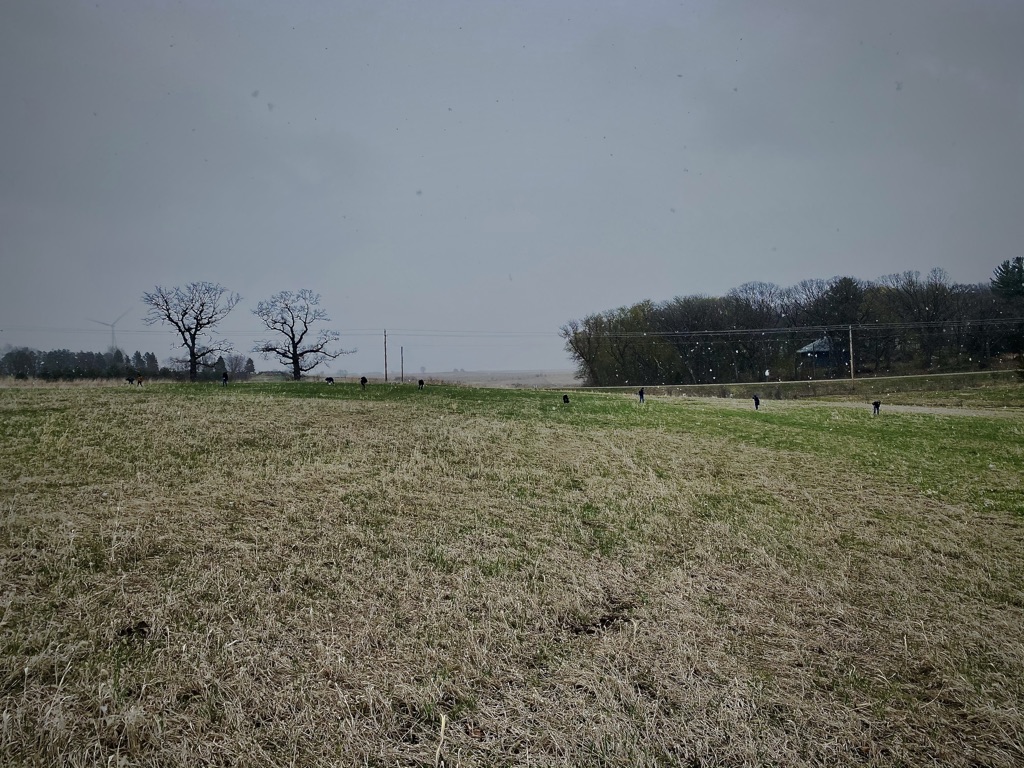 Our lab focused on a series of locations within the Arb that have already been the subject of various previous studies. Our first site was that of a late 19th century mill. Although the bulk of the remains were across the river, it was interesting for a few reasons. The first being how the current changed around the little rock island in the middle of the river. In class we discussed that this is due to the dam built there for the mill. Although it hasn’t stood for over a century, the mill still affects its ecological surroundings. I also found it interesting the amount of material left there over time. I had assumed that all would have been reused in other industrial endeavours, but I guess some of the ruins were deemed unusable or unproductive to reuse.

The other highlight of the tour was the Women’s League Cabin. The most striking part of this stop was the walk into the trail through the sea of blue flowers, just now blooming for spring. The trail takes you up and down a series of two or three steps that I can imagine were original to the building. The more you brush around the ground on the trail, especially once you get to the opening, the more evident the foundation like stones are. Nature hasn’t disposed of the cinder blocks; it merely has taken them over.

The last step of the tour, the site of the veterans quarters, was also interesting. I was fascinated by the fire hydrant that seems to be dated in the 1960’s, which, to me, contradicts the hypothesis that it was built with the housing quarters, which were built in the 1940’s. Despite the heat throughout the walk and the length of the whole affair, it was very worthwhile to get a better sense of the history present just a walk away from my dorm.